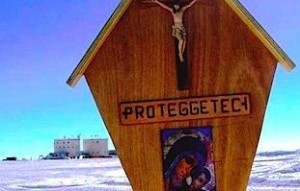 (Antarctica) In the eternal cold of Antarctica researchers have erected a wayside shrine. The place, where the wood panel has been planted with a wooden crucifix and a Marian icon, is called Our Lady of the Glacier. "You will be my witness in Jerusalem and in all of Judaea and Samaria and to the ends of the Earth" (Acts of the Apostles 1:8). The words, which Jesus gave in his departing message to the disciples, have been adopted by a group of researchers. They have erected a wayside cross in one of the most uninhabitable parts of the Earth, in the middle of the Antarctic. The researchers are active at the French/Italian station Dome Concordia, which lays on an enormous high plateau in the East Antarctic. On the station, laying at 3,233 meters above see level, the outline of Dome C may be found, located about 1,000 kilometers from the coast. The station is part of the European Commission and European Science Foundation funded Antarctic Research Project EPICA.

The chief doctor of the research team, Vincenzo Di Giovanni explains in a letter, that two members of the expedition came by the idea for the erection of a wayside cross and that it was agreed upon by the others. From wood, they set up a box of wood panel with a small roof and put a Crucifix and Marian icon on the panel and between the two is the inscription "Protect Us".

The wayside cross was put up between the research station and the ice field, on which planes land. In the mean time, the Scientists have ceased calling the station Concordia among themselves, but after the Virgin and Mother of God Mary "Mother of the Eternal Glacier".

Last December 8th some colleagues of the research station formed a procession to the wayside cross, and prayed there on the Feast of the Immaculate Conception together. As Doctor Di Giovanni continued to write, that the wayside cross is also "respected by the Moslem scientist or the agnostic or atheist researchers."

"Here on the extreme end of the world we need God's assistance and want to fulfill his mandates", says Di Giovanni in his letter from the place, where the temperature goes 80 degrees celsius below zero. A place in which for six months during the Summer, the son never goes down and in the extreme polar night, an eternal darkness rules. 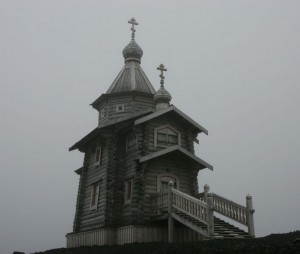 On the religious topography of Antarctica there is, besides the wayside cross of Our Dear Lady of the Glaciers, still another Christian place. Already since 1976 there is a Catholic Chapel of the Antarctic at the Argentine Research Station Esperanza (Hope) which is dedicated to St. Francis of Assisi. In 2003 the Patriarch of Moscow established on the island of South Shetland a Russian Orthodox Church of the Holy Trinity.