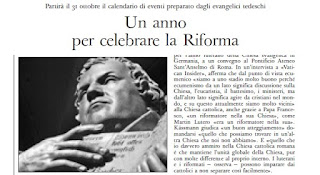 Edit: Käßmann is the first female Lutheran Bishop who was arrested for drunk driving in 2010, yet never the less, appears frequently to promote gender ideology, contraception and heresy at events staged in the fabulously wealthy German Catholic Tax-Church.
(Rome) German Catholic media started ​​it, the Osservatore Romano now follows, and is "celebrating" the commemoration of the Protestant Reformation with pleasantries. On May 7, the daily newspaper of the Pope published the article "A Year to Celebrate the Reformation". From October 31 2016 to the October 31, 2017 "the German Evangelical Church has" a calendar full of events.
"The 500-year celebration of the Protestant Reformation will last exactly one year, which is traditionally associated with the publication of the Disputatio per declaratione virtutis Indulgentiarum which was in conjunction with the 95 theses, which Martin Luther nailed at the door of the episcopal church of Wittenberg in Saxony-Anhalt on 31 October 1517," said Osservatore Romano .
The kickoff  on October 31, 2016 will be a "great ceremony in the Marienkirche of Berlin". In May 2017 the "World Exhibition" in Wittenberg will take place, where "the products derived from the Reformation in the various countries and churches,  but also the fruits of culture and civil society," will be showcased.
The Kirchentag will be held from May 24-28.  A Kirchentag "in motion", which will be held in eight German cities, and then all will merge in Wittenberg for its completion.
"The German Evangelical Church has been preparing for this anniversary beginning in 2008 with a way of contemplating and to set up a network between 69 cities of the Reformation in Germany and in Europe, important places for the history and the presence of Protestantism. The conclusion of the festivities will take place at the national and international level on 31 October 2017 with a number of public events. The calendar of the ecumenical events is rich," said the Vatican daily.

Ecumenism is "in a very good state, thanks to Pope Francis"

"We can 2017 make a critical revision daring to see the reformation on an international and ecumenical horizon as a complex factor," said the "theologian and Lutheran Bishop Margot Käßmann, Ambassador of  Luther Year" recently held at a Catholic-Lutheran Reformation Conference at Pontifical Athenaeum Sant'Anselmo in Rome.
Käßmann said this about Ecumenism in an interview with Vatican Insider:

"We are in a very good stage because ecumenism on the one hand is a discussion about what the Church, the Eucharist, baptism, officials, means, but then also acting as Christians in the world, and since we are currently [the Catholic Church] very close, thanks to Pope Francis, a reformer in his Church, as Martin Luther a reformer was in his."

For Käßmann, said Osservatore Romano, it was "a good opportunity" to ask, "what we can find in his other church, which we did not." As a specific example she cited: "What I really admire about the Roman Catholic Church is that it preserves the global unity of the Church, despite the many internal differences."
Text: Giuseppe Nardi
Photo: Osservatore Romano (Screenshot)
Trans: Tancred vekron99@hotmail.com
Link to Katholisches...
AMDG
Print Article
Posted by Tancred at 9:38 AM 3 comments: