Hebe de Bonafinis to Pope Francis -- Ridicule or Does a Marxist Shell Betray a Catholic Heart? 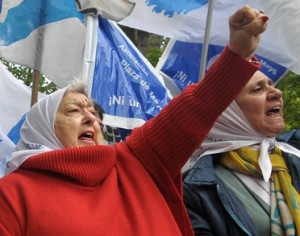 (Rome / Buenos Aires) Pope Francis has been met with great sympathy personally and throughout the world. Some Vatikanistas and Catholic media have done back flips. While the new Pope in Castel Gandolfo met his predecessor and beside a lunch forty five minutes in private with Benedict XVI., there was  a  headline which read  “Francis even convinced the leader of the Mothers of the Plaza de Mayo” making the rounds. That sounds really exciting, after all, belongs to the Argentine Hebe de Bonafini of the most famous figures of radical left, the slogans "Socialismo o muerte" (socialism or death)  still fall freely from those lips.
Only in 2008 had Hebe de Bonafini with others occupied the Cathedral of Buenos Aires, to put pressure on the government not to cut its subsidies for projects of Leftist mothers. After all, the Madres de Plaza de Mayo are now a widespread network of left-wing organizations, foundations and institutions.  Atheist Left, political battles and Church just don't fit together, so it is not surprising that during the unspeakable occupation of the cathedral it came to sacrilegious acts.

If Bonafini ever dropped by the cathedral,  then it was only in the form of political protest marches and even anti-clerical slogans. She was one who also protested the most bitterly against the Archbishop of Buenos Aires. When she spoke of Cardinal Bergoglio, then known under the accusatory chants of the radical left Argentina, "You kept silent when they were taken away." This refers to arrests and disappearances of political opponents during the military dictatorship from 1976 to 1982. The logic is intoned and remembered, not least, of the attacks on Pope Pius XII. The moral club forces the  attack automatically on the defensive.
Hebe de Bonafini was born in 1928, the mother of Jorge Omar and Raul Alfredo, who were killed in 1977 and 1978 together with her daughter Maria Elena Cepeda Bugnone during the military dictatorship. She is so far left that  the former terrorist and guerrilla Horacio Verbitsky, who wanted to implicate Jorge Mario Bergoglio after the election as Pope  with the military junta, and thus discredit him, is only a "slave of the U.S.”. Therefore, some time ago, some of the other mothers separated from her and formed a separate organization with almost the same name. The still sprightly Hebe never made a secret of the fact that her heart was for Fidel Castro, Che Guevara and basically swallowed whole every path that leads to Socialism and the revolution.

Could Pope Francis have converted actually such a hardcore revolutionary? It would be a miracle. Immediately after the election of the Archbishop of Buenos Aires as the new head of the Church she had thrown to the media just a sarcastic “amen” when asked what she thought about it.  It is probably the enormous excitement of Argentina’s poor over the election of Pope Francis, who the militant Hebe de Bonafini who habitually supposes to speak in the "name of the poor", can not be ignored. So she has resorted to pen and paper and written a letter to the Pope.
Should everything have changed so suddenly? Some Catholic journalists have this opinion, apparently without noticing the barely concealed mockery of Revolucionaria that their concerns, that its political program had been better disposed by Rome, but at the same time seems to make fun of the new pope. In her well-remembered, more for the public than for the Pope's letter as it justifies its alteration of meaning as follows: "I did not know of your commitment to the poor." And further, that she had been surprised in the truest sense of the word, "of the many testimonies the people from the Villas ", the slums of Buenos Aires that they "tell of their friendship” with Cardinal Bergoglio, the current Pope Francis. One marvels and wonders if the top nut of the Madres de Plaza de Mayo has not been living in the past 20 years as Jorge Mario Bergoglio. Since she was probably too busy with many of those revolutionary events and simply had  no time to worry about what the "class enemy" because actually says and does.

"Don Francisco: I hear tell many comrades from your work in the Villas."

The letter address the Catholic Church’s leader with simply "Don Francisco". More, she could not seem to rise to anything more, and it will not insult the Pope. "Don Francisco, I did not know your pastoral work, I just knew that  the top leader of the Argentine church lived at the cathedral. Today I listen to my great surprise, to many comrades, of your dedication and your work tell the Villas. "
"And that makes me happy and I feel infinite confidence, to hope for a change in the Vatican." Hebe de Bonafini would not be true to herself, if she did not raise the same political demands. She claimed to the Pope to have a list of all the priests and bishops who were disappeared in the Third World or killed, so that the Church might commemorate them and their struggle. It can be assumed that the list should contain only those names that were close to the political struggle of the radical left or to be appropriated by this. The Pasionaria can not seriously mean to inform the church about Her own sons.

The Pasionaria: "Don Francisco, and if you meet the Pope at the Vatican ..."

Then there is a political statement that seems aimed more at their own followers if they meet the pope they should “with their whole hearts” it prompts them "to fight for the Church of the poor” as in "our great Latin American homeland San Jose de Martin and Simon Bolivar did for thousands of people who have paid for their efforts to overcome poverty with their lives,  was the great dream of our sons the desparecidos.” were the two generals, the Masonic San Martin and Bolivar were certainly no friends of Church, quoted by Bonfini. While San Martin died in exile in France as a Freemason and agnostic, he rejecting ecclesiastical assistance, Bolivar was converted and died a faithful son "Our Holy Roman Apostolic Mother Church" as the Testaments of the show.
But lest anyone get the wrong idea  (except some euphoric Vaticanist) that even the avowed Marxist could perhaps become Catholics, including Hebe de Bonafini, her letter ends with the ironic words: "Thank you Don Francisco, and when you meet the Pope in the  Vatican, tell him of my concerns and the millions of other mothers. "
But maybe start in the heart of Hebe de Bonafini, the  hammer and sickle really has transformed into a cross. And, who knows, maybe they will even invite the Pope in the Vatican. Should he go to Argentina, he will certainly be received.
Text: Giuseppe Nardi
Image: Izquierda Reaccionaria
Posted by Tancred at 11:44 PM No comments: