Laos: New Cardinal Imprisoned by the Communists for Three Years

Cardinal Ling had proclaimed the Gospel without permission from the government. The three years in prison were necessary for his conversion and purification, he says retrospectively - with VIDEO Pakse

(kath.net/CWN/jg) Louis-Marie Ling Mangkhanekhoun, apostolic vicar of Pakse (Laos) and one of the cardinals who were created on 28 June, spent three years in prison during his communist regime.

His "offense" was to proclaim the gospel in villages and prisons without permission from the government. In 1984 the then 40-year-old was arrested and accused of "propaganda for Jesus".

He was in prison three years with chains on my arms and legs, he recalls. The time was essential for his inner formation. It was necessary for the "conversion and purification" of his person and also for others, he says retrospectively.

Rome Reports - Cardinal Ling from Laos spent three years in communist prisons: "For me it was like another novitiate" (English) Photo: Symbolbild 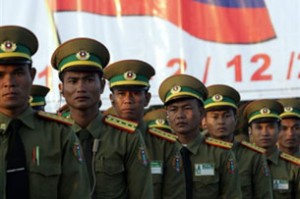 Translated from katholisches, original here.
Posted by Tancred at 7:40 PM No comments:

BANGKOK (UCAN) -- Laotian seminarians face formidable challenges, but their enthusiasm and perseverance in their priestly studies helps them overcome obstacles, says their formator.

One major challenge is seminarians' "low level of education compared with those from other countries," said Thai Redemptorist Father Anthony Wiboon Limphanawooth. He is in charge of nine young men, aged 19-23, at St. Teresa Middle Seminary in Thakhek, central Laos.

Most of the students in their first year "can't read the Lao language fluently," he said.

Furthermore, all the seminarians come from farming families and are not used to following an academic routine. "They have to train themselves to follow the seminary timetable," said the priest.

Despite the challenges they face, the seminarians "are very enthusiastic about studying," said Father Wiboon. "They are slow but they give you 100 percent."

St. Teresa Middle Seminary is one of two intermediate seminaries in the country. The other is in Pakse, southern Laos.

Father Wiboon, 41, said that as there are no minor seminaries in the country, local nuns and catechists recommend high-school students who are active in church to be personally taught catechism and prayers by priests.

When these boys finish high school, they enter an intermediate seminary where they study the Bible, spirituality, catechism and English. They then proceed to St. John Vianney Major Seminary, the only major seminary in the country, also in Thakhek, for philosophy and theology studies.

Apart from teaching at St. Teresa's, Father Wiboon also instructs 18 other young men, the oldest of whom are in their late 20s, at the major seminary.

The seminarians' perseverance is manifested in the low drop-out rate. At St Teresa's, only two dropped out last year, and in the major seminary no one has left in the past year.

Father Wiboon says vocations are promoted "quietly" in Laos and the numbers are slowly increasing. Last year, he received three new seminarians at St. Teresa's. Of the nine in his care, five are with the Redemptorist congregation.

According to Father Wiboon, the country has fewer than 20 priests. Several are studying overseas.

The next priestly ordination is expected only in about two years' time, he said. "In Laos everything is done slowly."