Sign of Peace Yes, But Without Confusion --- Pope Francis Corrects an Abuse

(Rome) The sign of peace in the New Roman Rite caused quite a mess. It is limited in the Old Rite only to the chancel and is exchanged in a dignified, unobtrusive way, it was expanded in the new rite to all participants in the Mass. With the right numbers, some believers and priests have their hands full. The greeting of peace will remain with the new provisions in the same place in the Holy Mass as before, namely shortly before communion. However, there are abuses to be corrected, which have crept in since the liturgical reform.
In some parishes, there is the greeting of peace, great confusion up to the point of a new year's party. Some of the faithful, but also priests,  mistake the liturgical greeting of peace with the bourgeois greeting habit and decide that they   want to welcome as many attendees as possible. Some priests even leave even the sanctuary, to go into the nave and shake a lot of hands. In some places Small Talk is entertained, which leads to the trivialization of the sacredness of the Mass. The greeting of peace should be the unexcited  symbolic gesture to bystanders in the neighboring pews, but not around all sides, those accessible front and rear. At the papal Mass in Bethlehem last 25 May, the  Muslim Palestinian President Mahmoud Abbas was curiously nearby at the sign of peace with the Pope on the altar  to visibly exchange an embrace. [The embrace implies mutual orthodoxy.] 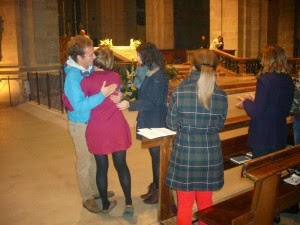 Liturgical abuse: Inappropriate forms the sign of peace and walking around in the nave during  Holy Mass.
In contrast, the Congregation for Divine Worship now has intervened under its Prefect, Cardinal Antonio Cañizares Llovera. It has sent a circular letter to all bishops' conferences of the world. The circular is signed by Cardinal Cañizares and the Secretary of the Congregation, Archbishop  Arthur Roche and is reminiscent of the study on the subject, which was created as part of the Synod of Bishops on the Eucharist in 2005.
The circular cites the Congregation for Divine Worship, which Pope Benedict XVI. in the Post-Synodal Apostolic Exhortation Sacramentum Caritatis which wrote on the Eucharist as "the source and summit of the life and mission of the Church". The number 49 of the letter is devoted to the "sign of peace".

49. By its nature the Eucharist is the sacrament of peace. At Mass this dimension of the eucharistic mystery finds specific expression in the sign of peace. Certainly this sign has great value (cf. Jn 14:27). In our times, fraught with fear and conflict, this gesture has become particularly eloquent, as the Church has become increasingly conscious of her responsibility to pray insistently for the gift of peace and unity for herself and for the whole human family. Certainly there is an irrepressible desire for peace present in every heart. The Church gives voice to the hope for peace and reconciliation rising up from every man and woman of good will, directing it towards the one who "is our peace" (Eph 2:14) and who can bring peace to individuals and peoples when all human efforts fail. We can thus understand the emotion so often felt during the sign of peace at a liturgical celebration. Even so, during the Synod of Bishops there was discussion about the appropriateness of greater restraint in this gesture, which can be exaggerated and cause a certain distraction in the assembly just before the reception of Communion. It should be kept in mind that nothing is lost when the sign of peace is marked by a sobriety which preserves the proper spirit of the celebration, as, for example, when it is restricted to one's immediate neighbours (150).
Benedict XVI. added in the footnote 150 added:
Taking into account ancient and venerable customs and the wishes expressed by the Synod Fathers, I have asked the competent curial offices to study the possibility of moving the sign of peace to another place, such as before the presentation of the gifts at the altar. To do so would also serve as a significant reminder of the Lord's insistence that we be reconciled with others before offering our gifts to God (cf. Mt 5:23 ff.); cf. Propositio 23.
Before the Offertory is also the moment in which the sign of peace in the Ambrosian rite takes place, which is in the ecclesiastical province of Milan.

The New Guidelines of the Congregation for Divine Worship 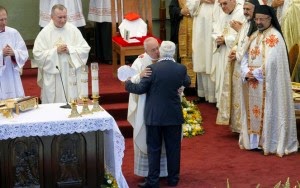 Liturgical Abuse: The Muslim Palestinian President Mahmoud Abbas at the greeting of peace with Pope Francis.
The circulars of the Congregation for Divine Worship, dated June 8 is approved by Pope Francis. On 7 June, the Pope received  Cardinal Cañizares in audience and approved the text to the Bishops' Conferences. It says that after consultation with the Bishops' Conferences about the greeting of peace at its previous location before Communion they are to make no structural changes to the Roman Missal.
At the same time, however, a number of practical guidelines would be adopted to remedy the abuses.
1) It is to be reminded that it is not necessary to mechanically invite the faithful every time to exchange the sign of peace. If it seems appropriate, one should pass it up.
2) It is recommended to improve the recommended procedures for the sign of peace in a new edition of the Missal by the Episcopal Conferences. A specific recommendation is here, for example, a more appropriate than familiar and profane gestures, to proceed with more appropriate gestures.

3) The Congregation for Divine Worship refers to the need that the following should be avoided in the greeting of peace: the establishment of a peace song which is non-existing in the Roman Rite; that the faithful leave their place; that the priest leaves the altar to enjoin some believers in the sign of peace. In addition, it is suggested to avoid that on special occasions such as high feasts of Easter, Christmas, baptisms, first communions, confirmations, weddings, ordinations, religious professions, requiems, the misuse of the greeting of peace to congratulate others, or express condolences to them.
4) The Bishops' Conferences are invited to develop liturgical catechesis on the importance of peace in the Roman Rite liturgy and on the correct procedure in the Holy Mass.
The circular already dated for June 8th was known about in Spain, where it was sent to all the bishops together with a letter of 28 July. "You will now see whether and how it is used: in Spain and elsewhere," said Sandro Magister of Vatican expert who introduced the matter.
Text: Settimo Cielo / Giuseppe Nardi
image: Katholisches.info
Trans: Tancred vekron99@hotmail.com
Link to Katholisches...
AMGD
Posted by Tancred at 5:54 PM 12 comments: