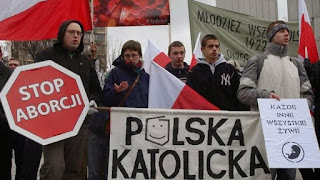 Feminist and pro-abortion organizations agitate for the legalization of infanticide. The feminist group Feminoteka demonstrated with unscrupulous slogans for a "right" to kill unborn children, "My body belongs to me", "Abortion is sacred" and "Vade retro Pro Vita".
International institutions such as the EU and UN are exerting pressure on Poland to legalize infanticide. In November 2015, there came the perverse paradox that the UN Committee on the Rights of the Child, who were responsible for compliance with the UN Children's Convention in 1989 of Poland on behalf of the Children's Rights, demanded the legalization of abortion.
Text: Giuseppe Nardi
Image: IPCO (Screenshot)
Trans: Tancred vekron99@hotmail.com
Link to Katholishes...
AMDG
Posted by Tancred at 1:22 PM 8 comments: