Will There be Justice For Cardinal Innitzer?

[Kreuznet, Austria]. The Archdiocese of Vienna is working together with a Holocaust Museum in Washington, in order to accuse Austrian Church History. This was reported yesterday by the the news agency 'kathpress'. It concerns data being researched about the Viennese Cardinal Theodor Innitzer († 1955). The Prince of the Church supported the Anschluss of Austria to the German Reich. At that time he signed a declaration with "Heil Hitler" Actually, from October 1938 – during the time when Reichskanzler Adolf Hitler († 1945) was an internationally celebrated political figure – the Prince of the Church turned against the Nazi political movement. He preached in Vienna's Stephansdom: „Unser Führer ist Jesus Christus“[Our Führer is Jesus Christ]. Today's leadership in the Archdiocese of Vienna on the other hand, has collaborated for years with the Abortion-State. 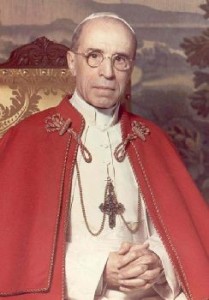