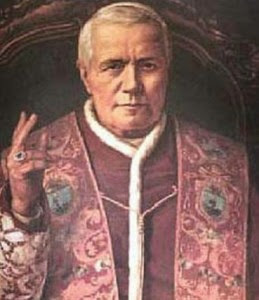 38) It remains for Us now to say a few words about the Modernist as reformer. From all that has preceded, some idea may be gained of the reforming mania which possesses them: in all Catholicism there is absolutely nothing on which it does not fasten. Reform of philosophy, especially in the seminaries: the scholastic philosophy is to be relegated to the history of philosophy among obsolete systems, and the young men are to be taught modern philosophy which alone is true and suited to the times in which we live. Reform of theology; rational theology is to have modern philosophy for its foundation, and positive theology is to be founded on the history of dogma. As for history, it must be for the future written and taught only according to their modern methods and principles. Dogmas and their evolution are to be harmonised with science and history. In the Catechism no dogmas are to be inserted except those that have been duly reformed and are within the capacity of the people. Regarding worship, the number of external devotions is to be reduced, or at least steps must be taken to prevent their further increase, though, indeed, some of the admirers of symbolism are disposed to be more indulgent on this head. Ecclesiastical government requires to be reformed in all its branches, but especially in its disciplinary and dogmatic parts. Its spirit with the public conscience, which is not wholly for democracy; a share in ecclesiastical government should therefore be given to the lower ranks of the clergy, and even to the laity, and authority should be decentralised. The Roman Congregations, and especially the index and the Holy Office, are to be reformed. The ecclesiastical authority must change its line of conduct in the social and political world; while keeping outside political and social organization, it must adapt itself to those which exist in order to penetrate them with its spirit. With regard to morals, they adopt the principle of the Americanists, that the active virtues are more important than the passive, both in the estimation in which they must be held and in the exercise of them. The clergy are asked to return to their ancient lowliness and poverty, and in their ideas and action to be guided by the principles of Modernism; and there are some who, echoing the teaching of their Protestant masters, would like the suppression of ecclesiastical celibacy. What is there left in the Church which is not to be reformed according to their principles?
Read more »
Posted by Tancred at 7:37 AM 7 comments: