The Servant of God Raimundo Lull (1232-1316), Franciscan and universal scholar who was from Mallorca. In addition to numerous other writings, he wrote the novel, Libre de Evast e Blanquerna, commonly known as Blanquerna, between 1283/1284. He portrays the life of the main character of the same name and is the first great literary work in Catalan.

Blanquerna is a figure of a deep and rich spiritual life and representative of an organic reform of the Church. Lull describes the seven deadly sins on the basis of the main character. Blanquerna decides, after a life that also makes him experience marriage and the birth of a son, to lead the hermit's existence.  Although he longs to be withdrawn, he soon becomes the abbot of a monastic community and eventually even becomes a pope. His pontificate is uneasy because he is subjected to hostility. He reorganizes the Roman Curia and reforms it from the ground in the right faith. He then declares his resignation and withdraws to his hermit's life.

The parallels to Pope Celestine V (1209-1296) are unmistakable. However, Celestine was elected pope ten years after Blanquerna's writing. Celestine's pontificate lasted only a few months, in order to overcome the stagnation in the election of the pope by mutually paralyzing parties. As soon as this had happened, he announced his resignation to the Cardinals to prepare for the election of a successor. As a precaution, he honorably left to prevent the danger of a schism in the church, since there can only be one pope. Celestine, who before his election was pope hermit and abbot, was already venerated as a saint during his lifetime.

There is another analogy in the office of Pope Benedict XVI. In February 2013 Brother  Amado Trujillo Cano, Vicar General of the Regulated Tertiary of St. Francis (TOR), wrote the corresponding description in Lull's novel Blanquerna.

Pope Blanquerna felt the desire to devote himself to a hermit's life, a passion that had accompanied him since he had decided to follow his vocation. This desire was always greater when he assumed new ecclesiastical responsibility and realized important and significant reforms not only for the Church, but also for the whole society.

Now that he had gathered with all the cardinals in a secret consistory, he proposed the creation of a ministry (in the etymological word of service) of prayer, whose leader was to devote himself to contemplative life in order to ask the Lord to give the excellent State of the Papacy and the Roman Curia, which had been achieved by the reform. When the Cardinals heard his suggestion, and his request to accept his renunciation from the papacy and to undertake with this new prayer, they tried to persuade him by all sorts of arguments. Blanquerna answered them with the request that they should have mercy on him. It was only because of this emphatic request that the Cardinals finally accepted his resignation, which pleased Blanquerna very much, because he could thus realize his heartfelt desire to devote himself entirely to contemplation in a hermit's life. He asked the Cardinals for their blessing and thanked them for their support. Then he immediately retired to the life of a hermit. The cardinals then elected the cardinal "Laudamus te" as pope.

The intended aim of Blanquernas's vocation calls in some way the path of the sanctification of Walter Map, who was a member of the Commission on the Third Lateran Council (1179) to examine the teachings of the Waldensians. He resisted the pauperistic path propagated by the new religious groups, which he regarded as false, for he observed that, while waiting for the papal confirmation, they humbled themselves, but when they were obtained, quickly abandoned their original resolutions, as soon as the call of their holiness brought them gifts and privileges. For Walter Map the unmistakable sign of holiness was the perfecta caritas, which was personified by three hermits who distinguished themselves by leticia perfectae caritatis, which was opposed to the hypocrites' tristes.

\On February 22, an exhibition on Raimund Lull will be opened in Rome in the crypt of the Basilica of St. Anthony (Via Merulana 124). The exhibition emtitled Raimundus Lullus, Christianus Arabicus - The meeting between cultures has been organized by the Pontifical University Antonianum in collaboration with the European Institute of the Mediterranean of the University of La Sapienza.

Benedictine Hermits of John the Baptist -- New Community of Tradition 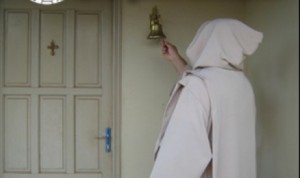 (Asuncion, katholisches) On the 15th of August on the Feast of the Assumption, in the South American state of Paraguay, Estevão Maria Salto was ordained a deacon by Msgr. Rogelio Livieres Plano, the Bishop of the Ciudad del Este.  Brother Estevão Maria is the founder of a community of Benedictine hermits.  The young community cultivates exclusively the Liturgy in the extraordinary form of the Roman Rite.

The Benedictine hermits live lives of eucharistic reparation in the Hermitage of St. John the Baptist.  They cultivate a life of penance for sins for sacrilege against the Most Holy Sacrament of the Altar.  The community is made of brothers and priests, who live as hermits.  They can also belong in a separate class also as celibate or married laity, who live in the world, but are devoted however as is suitable to them to make reparations for sacrileges against the Eucharist.  "Our main purpose in the Church is the serveice to honor the Most Holy Eucharist and reparation.  We sacrifice our lives for the good of the Church and the entire people of God",  says Brother Estevão Maria. 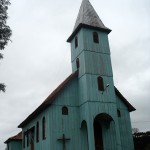 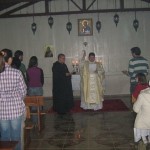 Link to katholisches...
Posted by Tancred at 6:19 PM No comments:

Editor: Franciscans are "friars" not monks.

The unbelievable story of Father Pietro Lavini: From 1954 to 2003 he rebuilt a monastery completely alone, in an untraveled mountain area in the Apennines.

Montemonaco (kath.net) In the spring of 1954 Father Pietro disappeared without a trace from his Cloister to rebuild a ruined Monastery in the Apennines Mountains. In the summer of 2003 the Bishop of Father Pietro received a letter with the sentence: "The Monastery is finished."

Andreas Englisch told the story of the Italian priest in his book "Traces of God: Miracles of the Catholic Church". Englisch had also related this story to the Hamburg evening news.

In the spring of 1954 the Abbot of the Franciscan Cloister by Ascoli Piceno in Adria noticed that Father Peitro had vanished. After a fruitless search he was removed from the list of priests, which entitles them to government support. He was reported as missing.

In the Summer of 1971, in the mountains near Gola del Infernaccio, a deep canyon in the middle of the Apennines mountains, which are famous for falling stones and avalanches, a mountain climber met the monk and told his Bishop: "The priest had very long, matted hair and a filthy beard. He lived in the cold of the high mountains in a kind of improvised hut made only from a few branches and a torn plastic tarp."

He sustained himself with heavily moldy bread, greens and tree bark. With self-made tools, he broke stones from the cliffs, there he was completely alone, without money or machines, where he wanted to rebuild the ruins of a Monastery. He had even built an aqueduct which carried water across the canyon. He collapsed from work many times, suffered broken bones, which he cured by himself with herbs. He showed me his serious injuries. I feared, the man was severely mad."

The Bishop then sent an inspector with the mission to bring the priest to a psychiatric clinic of the Franciscans. After his expedition, the inspector reported to the Bishop that after many discussions attempting to persuade Father Pietro, that "the brother isn't mad, rather he is a saint. I bid his blessing and hope that the Church will leave him there, where he is, completely close to God. I fear our time is mad, so that for us, the example of a man like Father Pietro is so rare." All attempts by the social office of the Bishop to induce the Priest to return, were unsuccessful.

Father Pietro had contact with a family from the village of Montemonaco, which lays some 20km from Father's abode. The father, Franco D'Agonsino, then wrote to the Bishop, "I don't wonder that he doesn't starve up there! The climb is difficult, and I bring Father Pietro something to eat, and every time his larder is bare. he appears not to be concerned by it. When the snow falls, he is cut off for months at a time. I don't know how he endures."

In the summer of 2003 a letter arrived at the Diocese of Ascoli Piceno: Father Pietro wrote only one sentence: "The Monastery is finished." The Bishop traveled by helicopter to the place and wrote a report to the Vatican thereon only one sentence: "What I have seen, is a wonder."

The Village of Monemonaco in central Italy has about 700 inhabitants and lays about two hours by car from the beaches on the Adriatic. And suddenly visitors from all parts of the world came to the village to ask the way to the Gola del Infernaccio
canyon in order to see "a saint". Great gaps in the cliff walls are witness thereto, how over decades of work by hand, block upon block had been separated from the cliff.

After four hours of climbing the visitor suddenly arrives at a beautiful Monastery building. Father Pietro Lavini receives visitors happily and says: "Naturally, I could never have built these great buildings alone. That was beyond the power of a man, God desired it. God had given me this life's dream: 'Build me there, where it is impossible, a house under impossible conditions, and I will sustain you, heal your sickness and give you to eat, even when you think you must starve.'

The video in Italian is here.

In religious life there are Anchorites who live alone, far from the world, and detached from their bodies, their souls reach heights of contemplation and love, even nearing, it is said, the throne of God.