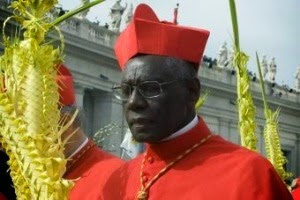 (Rome)  Facilitated by  tradition related sites on the Internet: the risk of Piero Marini as the successor to Cardinal Antonio Cañizares is averted.  Pope Francis has appointed the Cardinal Robert Sarah from Guinea to the new Cardinal Prefect of the Congregation for Divine Worship and the Discipline of the Sacraments.
The daily bulletin of the Holy See the renewal of the Congregation for Divine Worship was announced today at noon. Cardinal Sarah was already head of a Congregation of the Roman Curia. The previous president in 1971, established the Pontifical Council Cor Unum has now been put in charge of a Roman Congregation and upgraded in rank. The Council Cor Unum organized humanitarian relief efforts and is concerned with the plight of crisis and after disasters.
Cardinal Sarah was born in 1945 in Guinea in West Africa as the son of a Catholic family. After his studies in Guinea, France and Sengal, he was ordained a priest in 1969. He received his doctorate and graduated from the Bible Institute, a specialized study of Exegetic at the Pontifical Gregorian University. He was appointed in 1979 by John Paul II. as Archbishop of Conakry, Sarah was then the youngest diocesan Archbishop of the Catholic Church. His predecessor had been held in captivity for many years by the Communist regime. In 2001  John Paul II. called Archbishop Sarah to the Roman Curia and made ​​him Secretary of the Secretary of the Congregation for the Evangelization of Peoples. In 2010  Benedict XVI. made him the successor to Cardinal Paul Josef Cordes as President of the Pontifical Council Cor Unum and created him in the same year a cardinal. As such, he took part in the 2013 conclave.
In the fall of 2013 Cardinal Sarah attended a meeting of the Conference of European Bishops' Conferences (COMECE)  when he spoke of a "creeping apostasy among Christians." "A humanism without God coupled with a heightened subjectivity that  ideologies that are now promoted by the media and extremely influential and financially powerful groups, hide behind the guise of international aid and also operate in the Church and in our charitable organizations," said the cardinal  at that time, among other things. The criticism was aimed among other things, at  the political agenda of international organizations.
In 2012  Cardinal Sarah criticized that even Catholic organizations have adopted a "secular ethics." There is, according to the Cardinal, a "secular ethics", which was represented by "certain international institutions" and "is imposed by force by complex political, legal and cultural mechanisms, cultures and peoples around the world." As a result  "a negative and destructive view of man and woman" would be spread. "The history of the West has a sufficient connection between infidelity to the Magisterium and a demonstrated loss of faith" said Cardinal Sarah in his opening speech at the General Assembly of Cor Unum  on 18 Janaur 2013, as Osservatore Romano published. The black African cardinal is considered a vigorous defender of the non-negotiable values ​​and thus the right to life and the marriage sacrament.
In an interview with Zenit  on the recently concluded Synod of Bishops on the family,  Cardinal Sarah said  that the  question at its center, of communion for remarried divorcees is not one of the "real challenges for today's families". "The crisis of the family comes from a relativistic standpoint  that has also changed the understanding of marriage and the relationship of husband and wife," said the cardinal. The day before, he complained in an interview with Catholic News Agency about the pressure of international organizations and groups to link aid to Africa to the introduction of gender ideology.
This past October 24th Cardinal Sarah attended a Mass  for the reception of African priests, at the International Pilgrimage of Tradition Populus Summorum Pontificum  Rome and celebrated the Old Rite. From him, no one should expect liturgical experiments, toward which he, as is credibly said, he  has expressed incomprehension  and resentment.
Cardinal Sarah has led a diocese for 22 years, and has reached  the highest point of the Roman Curia with more than 13 years of experience.
Text: Giuseppe Nardi
image: MiL
Trans: Tancred vekron99@hotmail..com
Link to Katholisches...
AMDG
Posted by Tancred at 9:29 AM 8 comments: