Our Lady of the Holy Rosary, Pray For Us!

Edit: this is also the 444th anniversary of the victory of Catholic forces over the Turk at Lepanto in 1571.
Then as now, the Church and the remnant of Christendom is under assault, but this time the foes within are as threatening as the enemies without.
Perhaps it is this virtual eclipse of the only Church founded by Jesus Christ, that His  power will manifest to us, for it is only through Him that we will be victorious.
Now is a good day for everyone to petition His Mother for the graces our leaders need to guide the Church.
Posted by Tancred at 7:57 AM 3 comments: 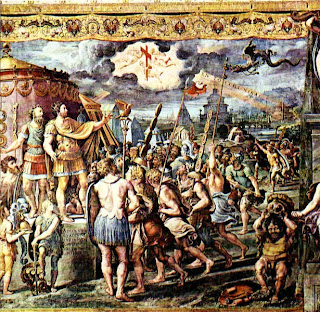 Edit: just before the battle of Milvian Bridge on the day before, October 27th, 312, the Emperor Constantine was given a sign in the heavens that would lead to his victory over the pagans and inaugurated a new age for the Church of cooperation with powers and principalities.

From the Epistle for the Feast of Christ the King:

(Col. 1:12-20) Brethren: Giving thanks to God the Father, who hath made us worthy to be partakers of the lot of the saints in light: Who hath delivered us from the power of darkness and hath translated us into the kingdom of the Son of his love, In whom we have redemption through his blood, the remission of sins: Who is the image of the invisible God, the firstborn of every creature: For in him were all things created in heaven and on earth, visible and invisible, whether thrones, or dominations, or principalities, or powers. All things were created by him and in him. And he is before all: and by him all things consist. And he is the head of the body, the church: who is the beginning, the firstborn from the dead, that in all things he may hold the primacy: Because in him, it hath well pleased the Father that all fullness should dwell: And through him to reconcile all things unto himself, making peace through the blood of his cross, both as to the things that are on earth and the things that are in heaven.

The last Sunday in October was declared according to the will of Pope Pius XI. as the Mystery of the Kingship of Jesus Christ.  This feast is no "eschatological" one -- Christ will rule at the end of times --, but today is a memorial directed against the "social errors".  This error is laicism.

The Feast of Christ the King proclaims the right of Jesus Christ over the hearts of individuals, families and the social life. and the commonwealth.

Why a Liturgical Feast to honor Christ the King?  Pius XI wrote in his circular letter:

IN THE FIRST ENCYCLICAL LETTER which We addressed at the beginning of Our Pontificate to the Bishops of the universal Church, We referred to the chief causes of the difficulties under which mankind was laboring. And We remember saying that these manifold evils in the world were due to the fact that the majority of men had thrust Jesus Christ and his holy law out of their lives; that these had no place either in private affairs or in politics: and we said further, that as long as individuals and states refused to submit to the rule of our Savior, there would be no really hopeful prospect of a lasting peace among nations. Men must look for the peace of Christ in the Kingdom of Christ; and that We promised to do as far as lay in Our power. In the Kingdom of Christ, that is, it seemed to Us that peace could not be more effectually restored nor fixed upon a firmer basis than through the restoration of the Empire of Our Lord. We were led in the meantime to indulge the hope of a brighter future at the sight of a more widespread and keener interest evinced in Christ and his Church, the one Source of Salvation, a sign that men who had formerly spurned the rule of our Redeemer and had exiled themselves from his kingdom were preparing, and even hastening, to return to the duty of obedience.

Link to New Advent for the Encyclical...

Edit: this is a feast especially for Monarchists. "They came from the east. The beginning of faith came from there, whence comes the day. Because faith is the light of souls." - Posted St. John Chrysostom.

Edit: It's happening all over Spain and part of the continuing Feast of Christmas.

H/t: for Rebelya, for Chrysostom quote.
Posted by Tancred at 8:28 AM 2 comments: