Experience with Jesuit professors of Philosophy and Theology at College in Frankfurt on the subjects of lay preaching and Christology.
A Gloss by Hubert Hecker.
The three decades after the Council meant  wild times for the liturgical experiments. One of the errors was the lay preaching at Holy Mass. In many parishes, the parish priest spared himself sermon preparation, leaving a layman to interpret the Gospel. This practice was also an effect of the anti-Roman tendencies at that time, because according to what was (and is) canon law,  preaching is an integral part of the priestly liturgy and is the task exclusively of the clergy.  The Vatican instruction of the Congregation for Worship from 2004 "recalled" once again the fact that the homily "is part of the liturgy itself and is subject to  the priest or deacon" as a special form of preaching.
To date, reports from participants in   Catholic message fora is that in dioceses with modernist bishops, lay preaching is still spreading. Some bishops even encourage pastoral assistants, parish officials or council members are tolerated, sometimes receive downright encouragement to do so.

Another attempt to make the lay preaching attractive

The rector of the Jesuit-run University of Philosophy and Theology in St. George in Frankfurt has recently launched a new attempt to undermine the Church's ban on lay preaching. This act of ecclesiastical disobedience comes on very soft soles, therefore with such mellifluous words such as "enlivening the Annunciation" and search "for open forms of preaching". Father Ansgar Wucherpfennig SJ apparently mastered the method of  hollow  persuasion when he can lead his submissions in the rhetorical question: "Why should a family man and a professor can not interpret the Scriptures according to the Gospel?" Yes, why not? - You can sense an echo from St. George students. After all, the social experiences (eg. As a father) are recently considered to be a  third source of revelation alongside Scripture and Tradition!
In a reader forum, there have been heated discussions about this initiative by the Frankfurt university rector. One participant said, "at the Philosophical-Theological University of St George everything is taught, not only Catholic doctrine. In this respect it is of little importance, whether a lay person preaches against the doctrine or a priest."  This statement, however, is clearly excessive,  insofar as it lumps the sum of all professors in St. Georgen as deviating from the Catholic doctrine. Nevertheless, the statement has  a grain of truth.

Parody of the Gospel 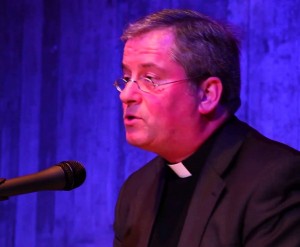 Dieter Boehler SJ
According to information from a student of St. George, there is evidence  from the lectures of at least three professors that they do not believe in the divine sonship of Jesus Christ.  One of them is likely to be Prof. Dr. Dieter Boehler SJ lic.  In a lecture in one of the IK-circles, he stated his theory of divine sonship a few years ago  that that it was a write-up of later authors. Jesus himself had not been seen as divine, as the Evangelists saw him. A listener of the talk protested against this presentation in  the discussion, but was silenced.
In a lecture a few days later, Professor Boehler made fun of the incident: A listener of his lecture had contradicted him by claiming the divine self-consciousness of Jesus Christ. He then directed the remark at him: "Jesus was sitting in the sandbox and had said, 'I am the Son of God! I am the Son of God.'" There was loud laughter of the students at such naivety of dumb believers.  With this parody of the Gospel he obviously meant to ridicule  all faithful Catholics, who adhere to the biblical witness of the Gospels and the dogmatic statements of the early Church.

Freedom of speech about everything

Of course, the professors are allowed to tell  their students  their opinion, thus the objection - for example in recreational encounters.  But as a university teacher of theology, professors are not asked for their private opinion, but commissioned by the Church and paid from  (Church) taxes  to communicate the Church's teaching.

Introduce the pluralism of professorial opinion in homiletic preaching

This is yet again only one opinion! - is how the followers of  such Jesuits  should counter, who want to reduce all biblical and doctrinal truth statements to opinions. This approach is followed logically in an appreciation of the diversity of opinions for the homily. Accordingly, any preacher could contribute to "enliven the proclamation". Looking "for open forms of preaching" would soon begin a homiletical debate in the university chapel - about the question: Jesus Christ - true God and man, or only subsequent fiction? Here, a family man could then contribute to this question with his experience of social reality as a third source of revelation. The student audience should be able to contribute. For the purposes of the active participation in the liturgy they are likely to ask, heckle and applaud,  statements contributing to a quick lively exchange of opinions about the gospel. However, then, such debates in a sermon would be deceptively similar to a seminar-discussion. The next step would then be logically to assert that real seminar debates are actual preaching and to refrain from preaching in the Church altogether.
Text: Hubert Hecker
Image: Wikicommons / Youtube (Screenshot)
Posted by Tancred at 4:28 PM 4 comments: