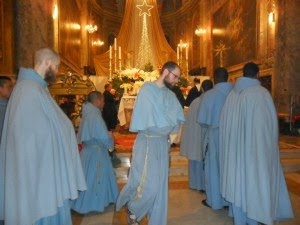 (Rome) After the Order revived monasteries that were abandoned by other orders, the monasteries  fall now again to degradation by the Apostolic Commissioner. A Catholic layman, who was led back to the Faith by the Franciscans of the Immaculate, sent an e-mail recently. In it, he laments the closure of a monastery of the Franciscans of the Immaculate. "I want to begin by saying that I'm a nobody and I feel as last among the faithful. But I also feel a great pain, seeng the Franciscan Friarss of the Immaculate Conception given the ax by  his hand. "
The Monastery of Sassoferrato in the Marches had been abandoned by the Franciscan Order for lack of  growth. The Franciscans of the Immaculate revived the monastery a few years ago new as they are ever thus also known for taking over  abandoned monasteries of other orders because of their numerous vocations and bringing them  to new life. At last count the  convent of Sassoferrato has 60 brothers.
The  Apostolic Commissioner Father Fidenzio Volpi being used by Rome, has now dissolved the monastery. The same fate will be met this week by the monastery of Colfano also a friary abandoned by the Franciscan Order in the Marches, which was  founded during the lifetime of St. Francis of Assisi. In July 2012, the Franciscans of the Immaculate encamped there and led the Franciscan life, which had filled the friary of Colfano for 800 years (see separate report New Monastery of the Franciscans of the Immaculate - Flowering Religious Tradition ). Now even this convent will be  dissolved by the Apostolic Commissioner. The Order of Father Stefano Maria Manelli had,  in an exceptional counter-movement to the general trend, reached vocations as  high of 800 religious  when the religious congregation intervened.
"The novices and seminarians are disoriented, the brothers in perpetual vows are being destroyed by agony,"  says the believer in his e-mail. "They are treated as if they were heretics."  It was Pope Benedict XVI., who opened access to the traditional rite of the Order as with all religious, priests and lay people. "With the arrival of a new pope,  the Order may not be as familiar to them as to  Benedict, 'someone' has gone over to the attack, with the result that is now in front of everyone to see." Now, every priest must ask permission to the to be able to celebrate the Old Rite, and if he wants to do it in front of the faithful, he must also apply for explicit permission each time. "Anyone who knows the history of the Capuchin nun Sister Veronica from Fermo or those of Padre Pio of Pietrelcina, knows how strong the attack of calumny can be, to fight and brake mystics."
What can these brothers "have done that is so criminal? They pray, do penance and rebuild  abandoned monasteries again. "
Text: Giuseppe Nardi
image: Messa in Latino
Link to Katholisches...
AMGD