Edit: tradition endures through the ages as they stand watch on the ramparts of the Vatican. The Swiss Guards have a long and illustrious battle history, whether it was dying to the man defending the King of France during the French Revolution, fighting to hold Lutheran Landskenechts back long enough for the Pope to escape, or keeping the revolutionary mob from laying hands on Pius IX, they’ve loyally and ever acquitted themselves valiantly in the defense of the Church and the anointed heads of kings. Today, they will swear their oath to a grateful Pope Francis.

Each year on May 6th, the Swiss Guard commemorates the sacrifice of 147 soldiers who died defending Pope Clement VII during the “Sack of Rome,” in 1527.   Here’s the oath they swear:

"I swear I will faithfully, loyally and honourably serve the Supreme Pontiff Francis and his legitimate successors, and also dedicate myself to them with all my strength, sacrificing if necessary also my life to defend them. I assume this same commitment with regard to the Sacred College of Cardinals whenever the See is vacant. 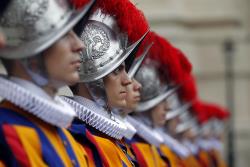 Furthermore I promise to the Commanding Captain and my other superiors, respect, fidelity and obedience. This I swear! May God and our Holy Patrons assist me!”

Then one by one the new recruits are called by name. Each one advances alone, and with his left hand he grasps the Guarďs standard, holding high his right hand with three fingers open, as a symbol of the Trinity, Father, Son and Holy Spirit, and he confirms the oath:

"I, . . ., swear I will observe faithfully, loyally and honourably all that has now been read out to me! May God and his saints assist me!”