"Many Come to the Society of St. Pius X, Demoralized and Shocked by Modern Seminaries" 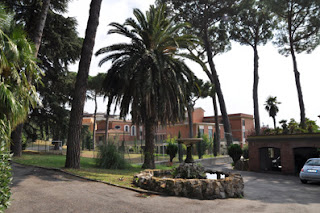 (Rome) "Our pre-seminary accepts many former diocesan seminarians, who are demoralized and shocked by the modern seminaries," said the Italian District Superior of the Fraternity of St. Pius X , Father Pierpaolo Petrucci in an interview for the Italian website of the SSPX. In the interview he points out that at the Motu Proprio Summorum Pontificum new contacts between the diocesan clergy and the SSPX have emerged. The experience of former diocesan seminarians confirms a critical situation in not a few diocesan seminaries, the young men who feel called to a vocation to go to SSPX or other communities of tradition.

The Italian district seat in Albano Laziale in Rome has established a Pre-Seminary with the academic year 2012/2013. The second course of the pre-seminary begins on the 1st of October. "The first year of Pre-Seminary was very positive," said Father Petrucci. "For the new year we have an even larger number of requests."

As the objectives of the Pre-Seminary is described by the Italian District Superior: "to consider the appointment of the young contender in the first place, but also those who are discovered to be unsuitable for the priesthood, to offer a Christian, theological and spiritual formation to them, without injecting doubt in every moment of life, is thought to be useful. Indeed, it is important that future heads of families will be militant Christians and fighters for the social kingdom of Our Lord Jesus."

Of the daily routine in the Pre-Seminary, the District Superior said, "In the morning are lectures on the Christian doctrine, the introduction to philosophy and theology, principles of Catholic liturgy and spirituality, as well as the Magisterium of the Popes are taught. This study allows us to explain in particular the position of the SSPX in the current crisis in the Church, a position that coincides with that of the constant Magisterium until the Second Vatican Council. The afternoon is devoted to personal study in addition to manual work. There are also visits to the city of Rome. Communal prayer of some parts of the Divine Office and the Rosary determine the rhythm of the days that are geared towards the celebration of the Holy Mass."

The men who are to be admitted to the Pre-Seminary come from other seminaries or directly to the Brotherhood, says Father Petrucci: "I would say that there are both: some young men are demoralized and shocked by previous negative experiences. Others who are aware of the situation prevailing in modern seminaries, contact us directly and ask for a traditional education. Those who are interested in attending these courses can contact our priories in any case, particularly that of Albano."

Contrary to popular prejudice, the SSPX entertains, perhaps more in Italy than in other countries, contacts with the diocesan clergy and also with some bishops. "We are basically trying to establish contacts with the priests, pastors and also with the bishops," said the District Superior of Italy. "We regularly organize meetings and retreats for priests. Even if the positions do not match, we never refuse an open confrontation to make our position better understood. It is true, moreover, that since the Motu Proprio Summorum Pontificum was issued, many Italian priests have taken up the celebration of the traditional Rite. These have approached the Society in great numbers and asked us for texts, missals and education in the liturgy and the Doctrine of the Faith. The celebration of the traditional Mass is very often the first step to approach the healthy theology and so to recognize the profound crisis that the Church is going through today."

When asked what the church would need in the current situation most urgently, the Italian Superior, Father Pierpaolo Petrucci, said: "I think the Church needs courageous Church leaders who are animated by a supernatural spirit and in the light of faith, live the unalterable doctrine and have the courage to speak out with clarity the errors of the modern world. Think of the terrible gay marriage law recently adopted in France. The hierarchy has had to go through this event in almost complete silence. Only the traditionalists were mobilized with great effort."