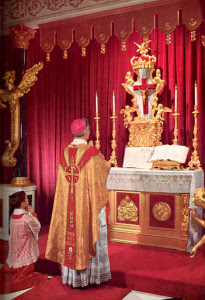 (Rome) Some thoughts from Cordialiter to return to the traditional form of Roman Rite, the prerequisites and the relationship between a dignified celebration of the Novus Ordo and this return.

Some years ago the traditional Abbé Claude Barthe was connected militant association Paix Liturgique for an interview. In it he said that the traditional Mass can not hope to return on a broad basis without a favorable climate in ordinary parishes. In this sense, he expressed the hope that the rite of Paul VI. will be celebrated as traditionally as possible and in accordance with the guidelines of the Second Vatican Council (ad Deum, kneeling Communion, Roman canon, Gregorian chant, etc.), thereby creating that friendly environment for the transition to the Tridentine rite.

I agree with Abbe Barthe, because experience shows that many of those who are in the past have focused around a worthy celebration of the Missal of Paul VI, have taken the step to the Roman Rite through the Motu Proprio Summorum Pontificum to the extraordinary form of the Roman Rite or are going to see it through. We think only of those like Don Alfredo Morselli, Don Nicola Bux, Father Stefano Manelli and many others. If all priests were celebrating the new Mass in its expected traditional sense, the Tridentine Mass would be today again the "ordinary" form of the Roman rite.

Moreover, it is, without a miracle, probably unthinkable that a priest who is used to torment the Sacred Liturgy by various abuses and disrespect, would suddenly decide to move to the traditional Mass.