Will Pope Francis Make a Decision on Medjugorje in Sarajevo? 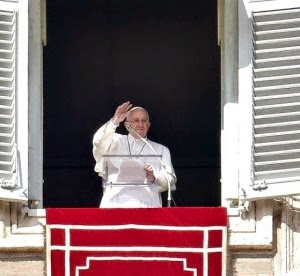 (Rome) During the Angelus on Sunday   Pope Francis announced a  visit this coming June 6th in Sarajevo, capital of Bosnia-Herzegovina. Will the Catholic Church leader to announce a decision on the phenomenon of Medjugorje?
The Pope is quoted as saying, according to Vatican Radio : "On Saturday 6th June I will - God willing - to travel to Sarajevo, the capital of Bosnia-Herzegovina. I ask you all for your prayers so that my visit will be there to encourage  Catholics, the leaven of good and a contribution to greater brotherhood and peace. And also for inter-religious dialogue, friendship."
Medjugorje was not mentioned by the Pope, but there is presently a tense expectation that the Pope could announce a final decision on the "apparitions". A decision is expected in a year.

Sarajevo went down in history as the scene of the assassination of the Austrian and Hungarian Crown Prince, Archduke Franz Ferdinand. An assassination which was the immediate cause of the First World War. Sarajevo is also the  scene of a civil war between Orthodox Serbs, Muslim Bosniaks and Catholic Croats, begun in  1991, in the wake of World War I, the artificial   state of Yugoslavia broke apart. Sarajevo today is also the capital of Herzegovina, in a once nondescript, but today is a most well-known spot. Not far from Mostar, situated in the mountains is the Catholic village of Medjugorje, a synonym for unrecognized "apparitions" in the Church, which has led pilgrims now for three decades to a largely unknown part of Europe.

Church has Denied the Supernaturalism of the Medjugorje Phenomenon

The two  ecclesiastical judgments on the "apparitions" carried out once through the competent bishop, and then by the bishops of Yugoslavia  are still negative. The competent bishops according to canon law,  were in agreement to deny the  supernatural character of the phenomenon. A judgment is valid until revoked in the Church. Under Pope Benedict XVI. the matter of Rome was investigated in 2010 by a separate commission of inquiry headed by Camillo Cardinal Ruini, who interviewed numerous witnesses, including also examining the "seers" and all available documents.  Although the Commission completed its work in late 2012, so far no result has been announced. The resignation of Pope Benedict XVI., who expressed  a detached attitude to the phenomenon, intervened.

For a Year the Medjugorje File is on the Pope's Desk

A year ago, Cardinal Ruini was received by Pope Francis and presented the new pope the final report of the Commission of Inquiry. Francis gave the still secret report to the CDF. A few days before Cardinal Ruini, the Pope interviewed the Archbishop of Sarajevo, Cardinal Vinko Puljic.
In the fall of 2013, the prefect of the CDF, then Cardinal Gerhard Müller, gave the US bishops statement not to tolerate any events within the Church, where the supernatural character of the Medjugorje phenomenon was claimed.  It was the reason the tour  of "seer" Ivan Dragicevic to the United States was subsequently canceled.

Pope Francis has not officially taken a position on Medjugorje. What unofficially became known indicates major restraint. On September 7, 2013, the Pope said in his morning sermon in Santa Marta, there could be "no Christians without Christ".   Here, the Catholic Church leader criticized Christians who cling to "apparitions" and would "look for something special." As far as the Pope's words were in the summaries of Vatican Radio and Osservatore Romano played.Has not been published, that the Pope called as a concrete example of what has been said, Medjugorje and added that the revelation was completed, however, with the New Testament.
Two months later, Francis said during his morning sermon on November 14: "The curiosity drives us to want to hear that the Lord is here or there; or allows us to say, 'But I know a seer, a prophetess, who has letters from the Mother of God, receives messages from the Mother of God'. But the Blessed Mother is a mother! She is not the leader of a post office to send daily messages. Remove these innovations of the gospel, of peace and of the wisdom of the glory of God, of the beauty of God."  The Pope's criticism of the addiction for publication was taken by observers in conjunction with Medjugorje,  and the previously-known and numerous" places of publication, "where" messages "are disseminated on an assembly line. But in Medjugorje  they now number into the tens of thousands.
Since then, Francis has made no more statements that may be directly or indirectly related to the Herzegovinian town.  What is in the final report and what it really means for the Medjugorje phenomenon, is unforeseeable, since there are conflicting signals.
Shortly before his election as Pope  Cardinal Jorge Mario Bergoglio gave the faithful of his archdiocese Buenos Aires permission to participate in the 4th and 6th March 2013, performances by Ivan Dragicevic. More than 15,000 Argentines took advantage of this opportunity to see this "seer" and  whose performance, a year and a  half  later was warned about by the CDF warned
The consent of the then Archbishop of Buenos Aires was explained  because a Herzegovinian Franciscan, Father Berislav Ostojic, had been Bergoglio's confessor since 2010. Medjugorje is supervised by Herzegovinian Franciscans who from the beginning have been as  local priests and spiritual fathers of the "seers", in direct contact with the Medjugorje phenomenon.
That Francis may use his stop in the country in which the phenomenon has occurred for more than three decades, to announce a final decision of the Church, but is expected to be rather unlikely.  Rather, what prevails as seems currently to be the motto in Rome that no decision is the "best" decision.
Text: Giuseppe Nardi
image Secretum meum mihi
Trans: Tancred vekron99@hotmail.com
Link to Katholisches....
AMDG