Enzo Bianchi's Eleventh Commandment: "Love the Earth as Yourself" 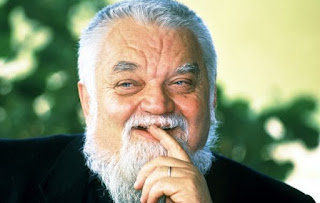 (Rome) "We have a new religion: It has just been invented by Enzo Bianchi," said Antonio Gurrado in the daily Il Foglio . The reason behind the "invention of a new religion" is the international Slow Food event "Salone del Gusto", which was held this last Monday in Turin.
The "new religion" is not the result of a revelation, but of "two convictions" by Enzo Bianchi, which he "announced" in the special supplement of the newspaper on September 16, La Stampa 11th Salone del Gusto of Terra Madre. The first conviction was "a sort of eleventh commandment" and reads: "Love the earth as yourself". The second conviction was the realization that the best way to love your neighbor, was to cook well for him.
"I wonder"; asks Guarrado "whether Enzo Bianchi is really convinced that the earth is a deity." Bianchi seems to think of the earth as a "creator deity," as a "mental deity" thank to think of him as a "revenge deity".  Bianchi wrote for the Turin Slow Food event of a "vital relationship between man and nature," the fact that "our inner life of the earth is no stranger," and: "God always forgives, but the earth never forgives."

The "eleventh commandment" really has it all. Jesus taught that men should love one another as themselves. Bianchi's "new commandment" does not speak either of loving God or neighbor, but the earth.
Bianchi knows his "conviction" is novel. "Love the earth as yourself, and the earth will reward you."
Enzo Bianchi  describes himself as the prior of a community of monks of the "Monastery of Bose". but Bianchi is neither prior nor monk but a layman who heads an "ecumenical grassroots group" he founded, called "Monastery of Bose". This isn't changed by the fact that Bianchi occasionally appears in a [creepy] cowl.
He and his "monastic community", which does not exist according to canon law,  represents a progressive adogmatic direction in the Church, which represents a horizontal, anthropocentric Christianity. The only way to "salvation",  says the Catholic historian Cristina Siccardi, "is for Bianchi a demagogic search for peace and an illusory universal friendship and secular solidarity."  In this sense, Bianchi is a media favorite.
The former Dean of the Faculty of Philosophy at the Pontifical Lateran University described Bianchi in 2012 as a "false prophet" and spoke of "atheist monks".
Pope Francis appointed Bianchi on 22 July 2014 as Consultor of the Pontifical Council for Promoting Christian Unity .
Text: Giuseppe Nardi
Image: MiL
Trans: Tancred vekron99@hotmail.com
Link to Katholisches...
AMDG