80th Anniversary of the Martyrdom of Dolfuss, Chancellor of Austria 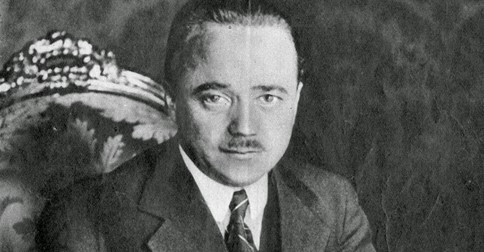 "Dollfuss was not a dominant figure in a Europe that was overshadowed by Hitler and Mussolini and Stalin and a sleeping Baldwin. But among all these men he brought the noblest character to his high office, he went against the most overwhelming superiority with the greatest courage and yet he met the most tragic end. He also encountered the worst slander. (...) This distortion has therefore taken place, because what is considered to be a  confused time of history, actually is a one-sided historiography. (...) But almost all his former enemies spread throughout  the West weighed their arguments against him in a tirade, which is particular to the intellectuals of the left, and with the frantic energy that is understandable for refugees." 1
On the occasion of the 80th anniversary of the murder of the hero Chancellor and has given the diverse and permanent soiling of his memory by secular and Church authorities, this has earned him a few words of tribute, and rebuke to those who deserve reproof.

The defilement of memories of one of the most important Austrian statesmen was made drastically apparent in the paint bomb attack on the Dollfuss-relief in the tower chapel of Vienna's Michael Church about four years ago. The Congregation of Salvatorians, which oversee the Church has not made this sacrilege public - for whatever reason. Unfortunately, it has become common for Church desecration simply move on to the agenda. Maybe  you might  encourage a copycat with by mentioning the incident.
But this is a false calculation. Attacks on churches are getting worse.
In the case of the Salvatorians they will also have played into  the symbolic of the madness of the current church scene -  as is very strongly associated with the Viennese social democracy. After all, the Salvatorian Albert P. Gabriel on April 12, 2013, received the  Prof. Dr. Julius Tandler  medal from the hands of Councillor Sonja Wehsely (http://www.donaucitykirche.at/2013/04/ehrung-unseres- pater-albert-gabriel / , with the wife of the City Councillor:  http://www.salvatorianer.at/content/site/home/ueberuns/article/722.html ). (For those readers who are less  familiar with   Austrian contemporary history, for information: Julius Tandler, 1869-1936, was a native of Moravia, a doctor of Jewish origin, who was  as a professor of medicine and social democratic member of the Vienna State Government with sociomedical pioneering achievements, but at the same time was for the sterilization or destruction "life unworthy of life"  and thus favored the "euthanasia" of the Nazi regime. He died as a consultant for hospital reforms in Moscow, one notes [!] in Stalin's time.  So one is not estranged to the ideological nuances in Marxism.  Viennese Councillor Wehsely is a social democratic politician and vehement proponent of abortion and late term abortion.)
Emblematic of the defiling of the memory of Dollfuss are the nefarious additional panels that are displayed at the Christ the King Church in Wien - Fünfhaus  and at the north portal of the Linz Cathedral (the latter in 2006). In the latter case, a willing exponent was found in a left council cathedral minister. Particularly reprehensible is the overpainting ordered on behalf of young socialists  of the  fresco funded by the faithful n the St. Pölten Prandtauerkirche (in 2007).
Finally, the grave of honor in the city of Vienna in Hietzinger cemetery was demoted a few years ago from the stage of a "historic tomb" (or it was said that there had never enacted in any case to a grave of honor).
The permanent rewrite of history as George Orwell in 1984 prophesied, has become a common practice.
What is it about them that they defile the memory of the martyr Chancellor?
Read more »
Posted by Tancred at 9:14 PM No comments:

Email ThisBlogThis!Share to TwitterShare to FacebookShare to Pinterest
Labels: Congregation for the Causes of Saints, Engelbert Dolfuss

Left journalists and left Political Historians are putting their class enemy, Engelbert Dollfuss in the crosshairs.  According to their presentation, the Church and the OVP are helping to pipe their journalistic  historical revisionism.

The anti-Catholic, pro-Jewish newspaper "Der Standard" launched a campaign against Austrian Cathlic politicisn early in February 2014.   Now  the leftist memorial stone stormers from  "Der Standard" have put  a war memorial with a memorial stone of Heinrich Dollfuss in Lower Austria  at Weitra in their sights.

The Catholic Chancellor Engelbert Dollfuss is considered a favorite target of Left Austrian historical revisionism as he narrowly prevented the planned transformation of Austria into a Socialist dictatorship by timely interference.   On 12 February 1934, the gendarmerie in Linz "hotel" Schiff, in which the supposedly peace-loving Socialists had created an extensive armory, opened fire on the police at the direction of Richard Bernasek.   That was the signal for the outbreak of the Red rebels, and thus the beginning of the February coup of the Left.

Battle alliance of "Social Democrats" with the National-Socialists


Bernasek was arrested a few days later freed by collaborating with the National-Socialist jailer along with National Socialists, housed at the expense of the NSDAP.     Bernasek wrote in April 1934 in Munich that he had tried to bring about a martial alliance with the National Socialists encouraged "by their strong Socialist tendency, which is apparent and clearly expressed among the masses of the NSDAP  and also in the ranks of the SA.". (Quote from: Richard Bernasek: The tragedy of the Austrian Social Democracy, in: Austria, the Powder Keg of Europe, Zurich 1934, p 258)


The writers argued in the introduction though, to treat concerns about Engelbert Dollfuss  "for further discussions," then found locally but apparently there was no one who could confirm this. Actually the board interviewed   the locals about the plaque  describing it as "controversial" and "perfectly fine".

Only Florian Wenninger, a staff member of the Institute of Contemporary History at the University of Vienna, here saw something "action worthy".

In the episode was shocked with the Un-issue the diocese in St. Pölten, but had already been the local bishop "conform to the system" reacts at the St. Pölten Prandtauerkirche on shouting anti-Catholic media and removed a Altarausmalung at the expense of the church.


Disappointed,  Marie-Therees Egyed and Peter Mayr  latched on to "Der Standard" edition of 9 April 2014 (" Dollfuss Plaque at Weitra: Panel Remains, Kruck Cross is Removed "): "With the idyll in the Lower Austrian Heinrichs it's over.  It's a shame there is a plaque next to the front gate."

So it goes for the erroneous wishful thinking of the two left-wing journalists.

As to any concern  about this in the area, there is nothing to recall.  In the village you can see really no interest in action.

This the "Standard" can only admit to and can only report that the ÖVP Mayor, Otmar Kowar has  received numerous letters about the local area and "from all over Austria" that the plaque should remain.


Mayor Kowar has noticed in the wake of media propaganda that knowledge is fading about the interwar period, and about Chancellor Dollfuss and he plans an information event for the locals. A good proposal.

Otherwise he seems to prohibit influence from Vienna on his community - a good ÖVP tradition.


The left-wing journalist presents the reader with one of the demands as quasi accomplished: The plaque would remain, but the "Cross is coming off," the accompanying text would be changed.
Whether "Der Standard"  wanted to manipulate this, we do not know.   Anyway, the council, on whose decision the monument was built in the interwar period, is responsible.  And as long as they haven't  made a decision,  not even "Der Standard" can report.

The Background and the Parties


The authors of "Der Standard's" campaign include Marie-Theres Egyed and Peter Mayr.

Marie-Theres Egyed, born in 1982, has only after superannuating at Univ. Oliver Rathkolb  (see: " The Hi-Hi-Hi-Historical Commission of the Red Party Historian Oliver Rathkolb") completed her thesis at the Vienna University. She is, according to "Standard's" report "neither noble nor catholic, nor monarchist ".   This is easy to notice.

The   Socialist Party historian  Oliver Rathkolb       was active for a long time working in the "Bruno Kreisky Archives Foundation."   That was apparently the necessary "qualification"   worth pursuing to sort out Vienna's streets on behalf of SPÖ City Council Mailath-Pokorny.

The red Nazi collaborator Karl Renner , who had campaigned for connection to the Nazi Germany, he excluded.

"Der Standard's" second author, Peter Mayr is a chucked out member of the Vienna  CV-Alliance  (Austrian Cartellverband, which is a Catholic organization formed during the Kulturkampf to fight against the persecution of Catholics in the World)  Joint publications with journalists from the left-wing sector (such as Wolfgang Purtscheller whose friends had blown up power lines in  Ebergassing) were co-founded because of his exclusion.

Florian Wenninger and Lucile Dreidemy (a French native) were at the Institute of Contemporary History at the University of Vienna and are currently working on projects with Oliver Rathkolb.

Dr. Ludwig Jedlicka, who by his own admission (reported by Prof. Kurt Dieman)  took a decisive part in the Hitler Youth's Storming of  the Archbishop's palace in 1938.

The intention of the article could also be an related to the appearance in autumn of a book about Dr. Engelbert Dollfuss on Lucile Dreidemy.  Its contents based on the title is easy to predict.
Posted by Tancred at 10:12 AM 2 comments: