"The earth would sooner last without the sun than without the holy sacrifice of the Mass,"  said Padre Pio once upon a time. 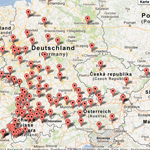 Everything on earth must serve to spread the true Sacrifice of the Mass of the Catholic Church.

A technically versed Catholic has programmed a new presence on the internet.  On this site "Churches and services of the Society of St. Pius X"  one can find all the Mass centers in Germany, Austria, Switzerland, Benelux, Hungary, Czech Republic and Slovakia.

All of the Mass centers are shown according to Diocese and also shows in one column the times of all Masses of the current day.

The programer who set up this page himself and gave pius.info the link to post, asks a hearty God bless.

Overview of Mass centers from pius.info...
Posted by Tancred at 8:14 PM 5 comments:

Fewer Births and More Immigrants. The "Demographic Revolution" with a Suitcase

ROME, October 29, 2010 – For Professor Ettore Gotti Tedeschi, economist and banker, and president of the Istituto per le Opere di Religione, the Vatican bank, the main cause of the economic crisis in the West is the collapse in the birth rate.

Gotti Tedeschi has been maintaining this thesis for some time, with great vigor. And he argues for it frequently at conferences and in articles in "L'Osservatore Romano."

Some, however, continue to think that what is blocking economic development is not a reduction, but an uncontrolled rise in the birth rate. One of the most tenacious proponents of this neo-Malthusian thesis is a famous professor of political science who has taught in New York for years, Professor Giovanni Sartori, a prominent editorialist for the leading Italian newspaper, "Corriere della Sera," from the columns of which he repeatedly attacks the Catholic Church as the champion of "insane demographic growth," a prelude to nothing but disaster.

Read further at Chiesa...
Posted by Tancred at 12:39 AM No comments:

The Results of the Diocesan Reorginization Editor: As predicted, none of the parishes closed were the parishes which host a spirit of rebellion against Catholic teaching. This reorganization was purely logistical and "honored" the integrity of the childless but wealthy homosexual-friendly communities and their deplorable counterparts in the suburbs.

For the most part, the parishes which were closed were part of dying parishes peopled by the descendants of the good people of eastern European descent.

We think it's safe to say that this Archdiocese is increasingly and inexorably moving toward an attempt at the liquidation of whatever remains of its sensus catholicus. This, really, is another sign of the fruits of Vatican II. Perhaps there will come a time when most people don't know about it, don't refer to it and don't care about it. Until then, we have the Catholic Faith, unspoiled, which we have a duty to learn, even if our Shepherds are bedazzled by large, ugly modern facilities and have consigned the spiritual welfare of their flocks to Godless academic professionals and impenitent homosexuals.

Meanwhile, in other parts of the world, remote and not so remote, real Catholics continue to pray their rosaries, make salutary sacrifices and encourage their children to vocations in the religious life or to foster large, wholesome, fruitful families.


Here's a link, here. Here's the story from the local neo-Marxist newspaper, here.
Posted by Tancred at 5:21 AM 2 comments:

Father Piero Gheddo, an Italian missionary priest, said Wednesday he believes a declining birth rate among Europeans combined with a rising tide of Muslim immigrants could mean that Islam will soon dominate Europe.

"Certainly from a demographic point of view, as it is clear to everyone that Italians are decreasing by 120,000 or 130,000 persons a year because of abortion and broken families; while among the more than 200,000 legal immigrants a year in Italy, more than half are Muslims and Muslim families, which have a much higher level of growth," he said, according to Rome's Catholic news service Zenit News Agency.

Read further...
Posted by Tancred at 2:16 PM No comments:

But... the group specified as "Practicing" Catholics only go to Mass at least once a month including people who go during funerals. We're sure that people who are scrupulous enough to go to Mass every Sunday would be much more certain about absolute morality.

In one of the defining works of his historic papacy, Pope John Paul II argued that if people -- believers and nonbelievers alike -- want true freedom and peace, they must accept the reality of "universal and unchanging moral norms."

"When it is a matter of the moral norms prohibiting intrinsic evil, there are no privileges or exceptions.


"Practicing Catholics" were defined as "those who attend religious services at least once a month," explained Barbara Carvalho, director of the Marist Poll. This group included "Catholics who attend services more than once a week, once a week, or once or twice a month excluding weddings and funerals," she said.

Link to original...
Posted by Tancred at 7:43 AM No comments:

Archbishop Eijk of Holland: Years of Reality for the Church

[Kathnet, Holland]Dutch Archbishop submits that in Holland in the next ten years 1,000 more churches will be closed, 600 protestant and 400 Catholic. The Archbishop denies that they will be used as mosques.

The Dutch Archbishop Wim Eijk sees the next decade as "years of truth for churches". The turning away of belief in the Church will stabilize itself by year 2020, said the Archbishop of Utrecht in an interview with the newspaper "De Telegraaf" (Saturday). At present perhaps 16 percent of the of the population of the Netherlands is Catholic. This will also sink by ten percent. "Catholics, who still practice their faith, are strengthened by the search for authentic Faith," said Ejik.

The Archbishop maintains, that in the Netherlands over the next 10 years, 1000 churches will close, 600 protestant and 400 Catholic. The Bishops deny the use of churches as mosques. Empty churches could be used by other Christian communities, as health care facilities, or for cultural uses. Also, buildings can be demolished, provided that they are not culturally important landmarks.

Eijk, who has led the diocese of Groningen since the end of 2007, attempted to work decisively toward the financial health of the Church in Holland. "Had we not done anything, we would have been bankrupt in the last ten years, and had no more money to pay salaries," he said. Eijk is receiving sharp criticism for savings measures by a group of institutions for priestly education.

By Patrick B. Craine

MOSCOW, Russia, January 18, 2010 (LifeSiteNews.com) – Russia's Health Minister has called for a reduction of abortions in the country as a way of improving its meagre population growth.

"The topic of reducing abortions is definitely on today's agenda,” stated Health Minister Tatyana Golikova on Monday. “This won't solve the birthrate problem 100 percent, but around 20 to 30 percent."

In 2006, then-President Vladimir Putin identified the country's low birth rate as its greatest problem, though he did not draw the connection with the country's abortion rate, which is among the highest in the world. In 2005, in fact, there were more abortions than births in the country. On Monday, Golikova noted that in 2008 there were 1.714 million births and 1.234 million abortions.

US Catholicism Decline and Fall

The decline of the Catholic Church in the United States and in Europe is apparent to anyone who looks at the statistics. The American statistics would be comparable to the far worse European ones if it were not for the influx of Hispanic, Vietnamese, and Filipino Catholics. Catholics of European descent are a vanishing race.

Read further...
Posted by Tancred at 2:53 PM No comments:

Tashkent’s decision to remove monuments glorifying Soviet military achievements and to tear down a Russian Orthodox church there dating from 1898 in the first instance reflects the Uzbek government’s desire to take greater control over its own national destiny.

But the combination of these actions – one Moscow newspaper suggested today that they were “removing the traces of the USSR and of Orthodoxy” from that Central Asian republic – create more than usual problems for Russia because it raises questions about the relationship of the Soviet and Russian past in the future.

And that relationship is increasingly sensitive not only in the ethnically charged atmosphere in the Russian population but also as President Dmitry Medvedev seeks to maintain the former Soviet space as a Russian sphere of influence even while pursuing closer relations with the Western powers.

Over the weekend, “Komsomolskaya Pravda” reported today, the Uzbek authorities demolished or moved away monuments that formed part of the Park of Military Glory that the Soviet authorities had set up in 1973 and tore down an Orthodox church as part of a plan to build a new government administration building (kp.ru/daily/24398/575153/).

Link to original...
Posted by Tancred at 8:44 AM No comments: