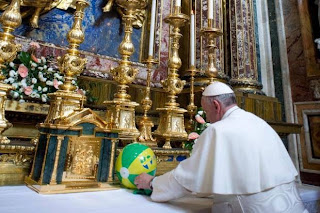 Here's the Report from News.va:

After his arrival at Ciampino airport, the Holy Father chose to stop at the Basilica of Saint Mary Major to offer a brief prayer to the Blessed Virgin for World Youth Day.

Seeing the Pope as he entered the Basilica, a group of young people approached him and offered him a T-shirt and a ball. Pope Francis later offered the gifts to the Madonna.

This is one of the great churches of Christendom, and recalls a time when it snowed in the summer as a sign of Our Lady's favor.  It was commemorated by the command of St. Pius V in connection with Trent.  Taken from wikipedia's article:


"During the pontificate of Liberius, the Roman patrician John and his wife, who were without heirs, made a vow to donate their possessions to the Virgin Mary. They prayed that she might make known to them how they were to dispose of their property in her honour. On 5 August, at the height of the Roman summer, snow fell during the night on the summit of the Esquiline Hill. In obedience to a vision of the Virgin Mary which they had the same night, the couple built a basilica in honour of Mary on the very spot which was covered with snow."

The Cafe from Hell 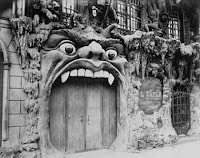 Edit: You've heard of the Dive Bar? Here's a place that lasted for almost half-a-century in Paris. It provides a meditation for the palpable presence of evil in the world and for that moment when Christ was nailed to the cross as an offering for our sins and where we will go if we do not merit His sacrifice.
[Retronaut] ‘Le Café de L’Enfer was a Hell-themed café in Paris’ red light district (aka Pigalle, the neighborhood of the Moulin Rouge), created in the late 19th century and operating until sometime around the middle of the 20th.’
Link to Retronaut....
H/t: Hyoomik
Posted by Tancred at 1:29 PM No comments: