An Excommunicated Saint: James of the Mark -- Exemplare Against the Worldliness of the Church 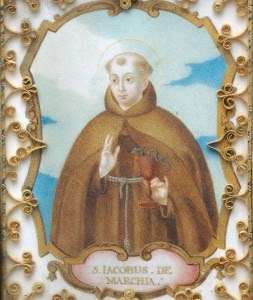 (Rome) In their recent article, the Catholic historian Cristina Siccardi sketches the life of a saint largely unknown today, however, he was a well known and pervasive  significance during his lifetime. His personal life was that of a penitent, it consisted of radical poverty, humility and mortification. Outwardly he was an eloquent preacher, the people were roused, and led to conversion by God. As he put on the robe of Saint Francis of Assisi at the age of 22, his life was one of the salvation of souls and the fight against the heresies of his time. From then on, he  took off his shoes and sandals and  went barefoot in summer and in winter for life. An example of radical detachment from the world.  He appears for the first time in Corrispondenza Romana.
.

by Cristina Siccardi
The time that preceded the Protestant Reformation [Revolt] was marked by the solid and magnificent work of some preachers, among whom was one who was truly great and was even excommunicated. His name was James of the Mark (Giacomo della Marca, 1393-1476). His liturgical memorial falls on the 28th of November. Between the 14th and 15th Century the church was corrupted from the inside out, while defrauded many heretics faith and doctrine. While the ground was prepared, on which the heresiarch Luther could act, this intrepid preacher at least brought a little order.

The life of a penitent

James of the Mark was born in Monteprandone in Ascoli Piceno as Domenico Gangala, had an area that Emperor Charles the Great 774 transferred the supremacy of the Pope. At the age of 22 years, James moved to Santa Maria degli Angeli in Assisi, the coarse habit of the Franciscans, which he received from the hand of St. Bernardine of Siena. His life was marked by extreme penance. He underwent in his life as a penitent seven forty days of fasting times of the year, while his meals consisted on the other days of a bowl of beans that have been boiled in water.
Because of his life of penance, he had poor health and was prone to illness - he received  last rites six times  - he still held on to his deprivation of life as an itinerant preacher. The only thing he feared in his life was  that physical pain distracted him and kept him from prayer.

Disciple of Saint Bernhardins of Siena

Due to the catechesis of Saint Bernardino he was formed to be  a more efficient preacher, like St John Capistrano, Blessed Albert of Sarteano or the Blessed Matthew of Girgenti,  James altered vocal technique and gestures, but also the content and structure of his sermon. The treatment of ethical and political issues was preferred and used for material from the texts of moral theology and canon law. He made ample use of Exempla, examples which were often presented in a dramatic way. Mostly he used the vernacular. He campaigned for the spread of the devotion to the Sacred Name of Jesus and insisted on some commonly recurring themes in his sermons, therefore: superstitious practices, abundance and luxury, games of chance, cursing and usury (He coined the idea of ​​the Monti di Pietà, to free the victims of usurers (out of this fight against the usurer, European banking originally arose from the Franciscan Monti di Pietà,))

The Life of a Wandering Preacher of Repentance

James' sermons are like thunder, the wake up call even for the most stubborn minds. They feed from the Scriptures, which he often quoted, but the Saint also fetched suggestions  from Dante's Divine Comedy. No one takes a nap or can be distracted by his own thoughts when he attends his sermons of extraordinary penetrating power, which also had a theatrical touch, but very often reach their true and ultimately single goal: to convert.
James of the Mark is  an unusual Franciscan. He stands out because of his gentility. A confident and determined, he knew to unite love and fire of divine judgment. He was a stern but compassionate theologian and inquisitor. His sermons unleashed not only rousing approval and enthusiasm among the faithful, but also lead to concrete reforms of the then so important to people's lives, statutes of several cities and establishing numerous brotherhoods, which he laid the first foundations of the Catholic Association. From 1423 to 1425 he preached a series of sermons in the area of ​​Jesi, where the heresy of the Fraticelli sparead that had emerged from the heretical Spiritual Franciscans. In 1426 he was  commissioned by Pope Martin V to preach in the whole of Italy  against this sect and gave him the brother of John Capistrano to help.

Salvation of Souls and Fight the Heresies

In 1432 he was sent to Central Europe and the successes were not long in coming. At the end of 1435, the Emperor Sigismund of Luxembourg, who was also King of Hungary, called him to  his residence in Tata (German Totis), located on the road between Vienna and Budapest today, barely 70 kilometers away from the capital of Hungary. James of the Mark  became a consultant to the Emperor  at the meeting with the delegation of the Council of Basel and the representatives of the Kingdom of Bohemia, where the Hussite heresy was still virulent. From then on, his fight against heresy stretched over the whole territory of today's Bosnia to Slovakia, where he preached against the Hussites, who came  there on their flight  from Bohemia there.

In August 1436 the Pope appointed him Inquisitor of Austria and Hungary and gave him broad powers. This included the right to build new monasteries in these countries. The support of the Emperor and the Pope, and the title of a legate at the Council of Basel, however, are not enough to secure him  inviolability. He experienced severe persecution by the local clergy who felt disturbed by his sometimes vicious life.  There were attempts to kill him several times, and the Archdeacon of Bacs (now on the border with Serbia) even excommunicated him. James of the Mark also took on the task to preach in favor of the crusade against the Turks. To this end, he was appointed in 1443 by Pope Eugene IV  as the Apostolic Nuncio.

Finally, they wanted to make him even as Archbishop of Milan, but he refused. Among the activities at the end of his life, is the construction of the library in the monastery of Santa Maria delle Grazie in Monteprandone, which he had founded in 1449 in his birthplace. The Saint succeeded there to collect 200 codices, which became the workshop of the preacher, in which he prepared his sermons. Even today there are his drafts and notes, his Exempla, his references to the Scriptures and to the theological and canonical texts. In 1476 he died in Naples, where he was buried. In 1664 Pope Urban VIII beatified him and in 1723 Pope Benedict XIII.  canonized him. In 2001  his remains were removed from Naples to "his" monastery in Monteprandone.
He dedicated his whole life to interior personal repentance and to  the control of external errors and thereby the salvation of souls. Today, under the tyranny of relativism, Giacomo della Marca, the Holy would not be seen as a fighter for the faith, but probably as fanatical troublemaker, to be excommunicated as a "nuisance", as someone already tried in his time.
Introduction / Translation: Giuseppe Nardi
image: Corrispondenza Romana / Wikicommons
Trans: Tancred vekron99@hotmail.com
Link Katholisches...