Bishops of Costa Rica: "Communion for Remarried Divorced is Not Possible"

(San José) The Episcopal Conference of Costa Rica has issued a document to implement the post-synodal letter Amoris laetitia. One possibility is that remarried divorcees might be admitted to communion, is addressed in a single word.

The largest newspaper of the Central American country, La Nacion, reported on 17 July, the Sunday edition, in large presentation on the front page of the new document by the bishops. "Church unwilling to give remarried divorcees communion," headlined the Journal. Presentation and headline reveal the expectations generated by Pope Francis whose questions hung in the air. The newspaper conducted an interview on the topic with Costa Rica's most famous Bishop.

On the question of the state are remarried divorcees,  Bishop José Francisco Ulloa Rojas of Cartago replied:

"They are still in the Church. They were never considered excommunicated. They can participate in everything except the sacramental communion.

On the question of whether these people can receive penance and the Eucharist, Bishop Ulloa clarified:

"In the Pope's document the possibility for remarried divorcees to receive communion isn't mentioned.  The Church, however, recognizes the way to practice continence in marriage, and there are examples. For these people, there is no impediment to participate also in Communion."

"I think that any Catholic who is conscious of his faith, knows that Communion is an essential aspect of his life. I'm sorry to say that does not mean all. Nevertheless, there are many couples in special situations who wish to receive Communion, but know that there is an obstacle to do it." 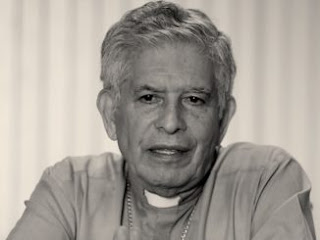 In 2010 Bishop Ulloa was, from the Supreme Electoral Tribunal of Costa Rica, the top electoral authority of the country, who, out of the three judges of the Supreme Court,  was condemned  because he had asked Catholics not to choose politicians who contradict the views and goals of Catholic doctrine, At the time of the statement, Costa Rica was in the election campaign. The Constitution prohibits the clergy from "interference" in politics. Although Bishop Ulloa had made his statement in a sermon during a Mass and not as a call to vote, and thus not in the political but in the vital area of ​​the Catholic Church, the court found him guilty. 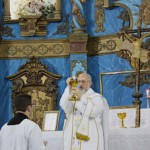 Link to Katholisches...
Posted by Tancred at 10:03 PM No comments: