Cathedral of Cordoba Confiscated and Nationalize? -- Celebration from the Muslim Side 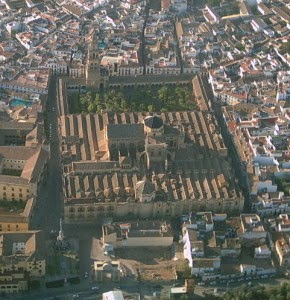 (Madrid) attacks against the Catholic Church have many faces. A recent venture appears in the style of the French Revolution as a snappy "joke”.  In the Spanish Andalusia Church opponents want to expropriate the famous Catholic cathedral of Cordoba and “nationalize" it. The southern Spanish city's cathedral is unique for architectural reasons. It has had an eventful history. Before the diocesan church was established  in 1236, it was used for several centuries an Islamic mosque, to be exact, the main mosque of the emirate and caliphate of Cordoba.
The Government of the Comunidad Autonoma de Analuciacan has legally examined whether there is a possibility of expropriation of the cathedral. The initiators of the expropriation action argue that the cathedral as a unique piece of architecture is a "World Heritage Site". But as such, it can not be owned by a religious community, and certainly not the Catholic Church, but must have its ownership  transferred to  the public. Modern robber barons in the name of the State,  have a lot of experience in which revolutionaries and their epigones of all ages.  Andalusia has been  governed  by a Leftist majority since the return to democracy. The provincial government originates without exception since 1982 from the ranks of the Socialist Party (PSOE).

A few years ago the call came  to convert the Cathedral in deference to the Muslims to a place of interfaith worship. A claim, which was rejected by the Catholic Church. Therefore, the new venture aims to profanation and conversion of the church into a museum.
In their anti-clerical urge Spanish secularists making themselves spokesmen for Islamic interests under the heading "multiculturalism". The fact that the Cathedral was previously a mosque, will be brought largely  into play, that a non-denominational solution  had to be sought by the state for the church. A secular group initiated two weeks with an Internet petition, seeking  the expropriation of the Cathedral. They will  rob, nationalize and profane the Catholic Church. The Cathedral of Cordoba should be made into a museum and become a kind of second Hagia Sophia in Istanbul.

The petition was signed by 88,000 people. "A strange alliance" as a spokesman for the Committee for the Protection of the cathedral said.  It was initiated by the petition of the Spanish Left, and "free-thinkers", but the majority of the signatures came from Muslims. Muslim groups and individuals have taken the ball and immediately mobilized for signing.
The petition has no legal relevance in itself. However, it was also signed by Maria Isabel Ambrosio, the competent Socialist government representative for the province of Cordoba. Ambrosio  also that gave a legal opinion in order to seek ways in which the cathedral could be expropriated and nationalized.
Against the Socialist expropriation a resistance is planning to upset it.  A few days ago they started collecting signatures for a petition on Internet. In it, the government of Andalusia is asked to take care of the real problems of the Andalusians, "instead of thinking about how to rob the Cathedral of Cordoba and expropriate."

Cathedral was Mosque, but the Mosque was Previously a Cathedral

With a plan of almost 180 meters long and 135 meters wide, the cathedral is one of the biggest constructions in the world. Today, it is fondly remembered in the context of multiculturalism and the increased immigration of Muslims to Europe to areas once occupied by Muslims which recalls  Catholic churches, because they had once been mosques. It is seldom mentioned, however, that these mosques were previously Churches that had been expropriated and converted by the Islamic conquerors. This also applies to the Cathedral of Cordoba. On a pagan temple of Emperor Constantine it  was already  a church at the time of the Great beginning of the 4th Century.  Around 550  the Visigoths built a new, magnificent diocesan church, which was dedicated to Saint  Vincent Martyr of Valencia.

Visigoth Diocesan Church was Desecrated in 786   and Expropriated by Muslims

When the Muslims conquered large parts of the Iberian Peninsula in 711, they forced in 714 a division of the cathedral. The Christians remained in only half of the diocesan church, while the other half was availed by the Muslims. A  difficult and conflict-ridden connivance to the detriment of Christians was the result. In 786 the new Muslim overlords had their dominion sufficiently secured so that they did not have to take more consideration for the Christian population. They confiscated the entire cathedral, they broke off the part and began to build a mosque in several phases, especially in the second half of the 10th Century, it  has been extended under the Caliph of Cordoba to  its gigantic proportions.
In 1236 Cordoba was recaptured for Castille during the Reconquista by King Ferdinand III.. The mosque was again converted into a Christian church and made  again into the diocesan church of the city. The largest renovation work was carried out in the 15 Century with the installation of a Gothic nave and early 16th Century by the construction of a Renaissance cathedral in Plateresque style. The Renaissance cathedral rises in the extent of one-sixth of the total mass high above the rest of the building complex.

Archaeological excavations in the 30s of the 20th Century, brought back parts, especially floor mosaics of the ancient Visigothic cathedral to light. It reminds one that the cathedral had  probably been a mosque for 450 years, but has been a christian church going back 800 years and was even before that  400 years.
Text: Giuseppe Nardi
image: Wikicommons / tempos
Trans: Tancred vekron99@hotmail.com
Link to Katholisches...
AMGD
Posted by Tancred at 9:03 PM 4 comments: