Did the Evil Puppet Masters of the World Financial Powers Shut Down Vatican Bank to Obtain Benedict's Resignation?

Edit: stripped wholesale from Orwell's Picnic. Let's not underestimate the effects of Vatileaks, which was certainly part of a multi-level attack against Pope Benedict that is decidedly anti-American, perhaps even more so than Pope Francis himself.

It wasn't enough that the exonerated Ettore Gotti-Tadeschi was under suspicion of corruption.

Indeed, if these details are confirmed, the ensuing scandal will cast a longer shadow on the Franciscan Papacy and the powers and principalities who now appear, with Cardinal Daneel's admissions which we touched on last year, bent on making the papacy a vehicle to create public consensus for social engineering on a global scale.  Man, if they could unmake a pope, they could certainly make one.

The journalist, Maurizio Blondet, who has broken this story is himself a Traditionalist Catholic, according to Italian Wiki.

Thanks to JEFF KLUMP who initially drew our attention to this interesting story.  Here's OP's contribution:

“Few know what SWIFT (the acronym stands for Society for Worldwide Interbank Financial Telecommunication) is: in theory, is a global “clearing house”, uniting 10,500 banks in 215 countries. In fact, is the most occult and sole center of American-globalist financial power, a bastion of blackmail on which the hegemony of the dollar, the most powerful means of political and economic espionage (to the detriment especially for us Europeans) and the means by which the most feared global finance breaks the legs of states that do not obey. …
…
“‘When a bank or territory is excluded from the system, as it did in the case of the Vatican in the days before the resignation of Benedict XVI in February 2013, all transactions are blocked. Without waiting for the election of Pope Bergoglio, the Swift system has been unlocked the announcement of the resignation of Benedict XVI.
“‘There was a blackmail come from who knows where, through SWIFT, exercised on Benedict XVI.The underlying reasons for this story have not been clarified, but it is clear that SWIFT has intervened directly in the management of affairs of the Church.’
“This explains and justifies the unprecedented resignation of Ratzinger, that many of us have been able to exchange for an act of cowardice; the Church was treated as a state ‘terrorist’, but worse — because note that the dozen banks falling into the hands of the Islamic State of Iraq and Syria ‘are not excluded from SWIFT’ and continue to be able to make international transactions — and the Vatican finances could no longer pay the nunciature, to convey transport missions — in fact, the same ATM of Vatican City had been blocked.
The Church of Benedict could not ‘neither sell nor buy'; its own economic life was counted in hours.”

Edit: basically, if the Pope himself were held to these standards, he would have to suspend himself.

Of course, the media, and ambulance chasing, political activist attorneys love him too much to bring him down.

(Asuncion) Pope Francis has dismissed  Bishop Rogelio Ricardo Livieres Plano of Ciudad del Este in Paraguay today. At the same time, he has appointed Bishop Ricardo Jorge Valenzuela Ríos of Villarrica del Espiritu Santo as Apostolic Administrator of the vacant episcopal chair.
The decision had already been signed off last summer, when the attention of Pope Francis  fell obtrusively upon  the Latin American Diocese and an Apostolic Visitor was sent.
After completion of the Visitation, soothing and friendly explanations of the transferees were indeed given, but whoever knows internal church practices, already feared the peace before the storm.
In a statement, the Vatican press office states:

After a careful examination of the findings of the Apostolic Visitations made ​​to the Bishop, dioceses and seminaries of Ciudad del Este, by the Congregation for Bishops and the Congregation for the Clergy, the Holy Father has proceeded with the replacement of Bishop Rogelio Ricardo Livieres Plano. He has appointed Ricardo Jorge Valenzuela Ríos, Bishop of Villarrica del Espíritu Santo, as Apostolic Adminostrator of the now vacant diocese.
The grave decision taken by the Holy See, under the weight of serious pastoral concerns, is for the greater good and unity of the Church of Ciudad del Este and episcopal communion in Paraguay.
The Holy Father, in the exercise of his ministry as "the perpetual and visible principle and foundation of unity of both the bishops and of the faithful" (LG 23) calls for the clergy and the entire people of God of Ciudad del Este to accept the Holy See’s decision with the spirit of obedience, docility and an open heart, guided by faith.

Moreover, he invites the entire Church of Paraguay, led by its pastors, to a serious process of reconciliation and to overcome any factionalism and discord, so that the face of the one Church "purchased with the blood of his own Son" is not wounded and the "flock of Christ" is not deprived of the joy of the Gospel (cf. Acts 20: 28).
The serious decision of the Holy See, judiciously because of serious pastoral reflections is governed by the higher good of the unity of the Church of Ciudad del Este and the Episcopal Community of Paraguay. 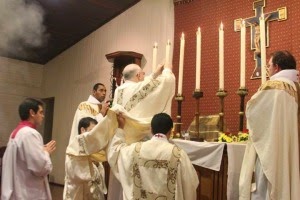 Bishop Livieres celebrates Old Rite
The Vatican statement must be translated into understandable words: faithful bishops disturb the "communion of bishops" and will continue in the name of an ominous "peace"  be sent into the desert.  Msgr. Ricardo Jorge Valenzuela Ríos, Bishop of Villarrica del Espiritu Santo, who is appointed by the Pope, is one of the most liberal bishops of Paraguay, as the Apostolic Administrator. An additional slap in the face.
The faithful Bishop Rogelio Ricardo Livieres Plano constituted an exception among Latin American diocesan bishops. Within a few years his Diocese of Ciudad del Este had flowered. In almost every parish of the Diocese  the Holy Mass is celebrated in the Old Rite. The seminary of the diocese has more than 200 seminarians, more than the seminaries of all other dioceses in Paraguay together.  Bishop Livieres was thus among the bishops what  the Franciscans of the Immaculate were among  the Orders. He showed that faithfulness in doctrine and liturgy brings great blessing. He became a bone of contention for the other bishops, who had very different "track records" to show.  Large archdioceses such as Buenos Aires and Montevideo have less than 30 seminarians (see report Latin Mass Boom in Paraguay - Causes Pope Francis to arrange visitation ). "That explains why the development in the Diocese of Ciudad del Este was interfered with by progressive parts of the Church," said Messa in Latino.

Bishop Livieres: Annoyed by Tradition and the Old Rite 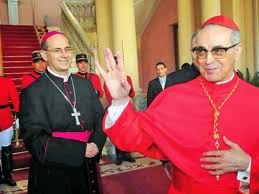 Visitor Cardinal Abril and assistant in Ciudad del Este
Bishop Livieras also did something  else that did the Franciscans of the Immaculate did, they lifted up their voice, equally among the others. However, a voice that was heard outside of the choir.
Now he is the victim of an intrigue which was quickly threaded together. The scattering of some unsubstantiated rumors, and the denunciations in Rome, which conspired to send a visitation.  The diocese refuted the rumors disseminated point by point in a detailed dossier. Bishop Livieres saw through the game quickly, and named the Archbishop of Asuncion Msgr. Eustaquio Pastor Cuquejo Verga as one of the main schemers, which he did publicly in a speech at the March for Life, where he accused him ofb "homosexuality"  and complained that he had still not been removed from office . [Of course, this happens all the time, but bishops rarely say anything in public.]

Bishop Livieres indictment that he openly raised  and not in the form of a denunciation, as his opponents  characterize it  had totally different kinds of consequences. Pope Francis sent a Visitor from 21-26th July, not to Asuncion, but to Ciudad del Este. The Episcopal Conference of Paraguay announced the impending visitation with obvious satisfaction at a specially convened press conference, of course, without  Bishop Livieres knowing about it.
If the impression  is awakened in the Vatican statement that the Congregation for Bishops and the Congregation for the Clergy had separately or even independently performed "visitations", this is not true. There was only one visitation and it was decided by Pope Francis personally. He also sent for the Visitor, Cardinal Santos Abril, Archpriest of the Basilica of Santa Maria Maggiore. Cardinal Abril, served from 2000-2003 as nuncio in Argentina and has been a close friend of Pope Francis (see report Pope suspended Ordinations in the Diocese of Ciudad del Este - A Deja-vu? ). 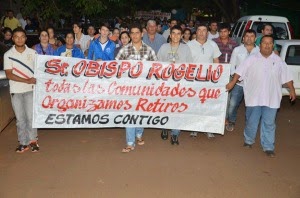 In Ciudad del Este is an oft repeated  Catholic tragedy,  one which has been experienced  the last 25 years  several times in the German language area. The attacks and intrigues were not always, but too often, successful. Not only bishops were deposed. In Austria a revolt of the progressive clergy and full-time employees of the Church,  rose up and put fraternal pressure and the interacted with the religion-hostile media already to prevent the consecration and inauguration of a bishop who'd just been  appointed.
Text: Giuseppe Nardi
Image: Eco Ciudad del Este / Diocesis de Ciudad del Este
Trans: Tancred vekron99@hotmail.com
Link to Katholisches...
AMDG
Posted by Tancred at 12:06 PM 20 comments: