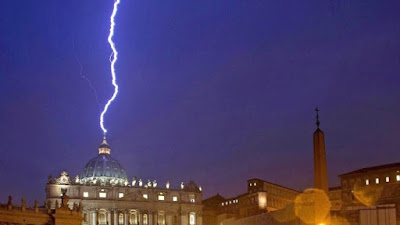 (Rome) Three years ago today, Pope Benedict XVI. completely surprised the world with the announcement of his resignation. 17 days later, he resigned from the office of Peter and left the Vatican. He changed the course of history.

" Ingravescente Aetate ", because of advanced age, was the reasoning that went through like a thunderbolt in the Church. In fact, a real lightning bolt struck the same evening on the dome of St. Peter. A natural phenomenon, which inspires horror to this day.

At that time it was claimed by some quarters in order to placate that the like had been done often and was nothing extraordinary. But neither before nor since has the "like" happened.

Benedict XVI. is yet alive, as his recent public performances have shown, and in command of his faculties.

His resignation is not comparable to anything in church history. No pope before him has resigned for "age reasons" from an office held for a lifetime.

In ten months his successor, Pope Francis, will complete his 80th year. He would have left the circle of papal electors and therefore, de facto, also from among the "papabili".