Editor: We just received this item from the e-mail. It's always heartwarming to hear stories of conversion. We'll withhold comment about Mr. Marley's ultimate fate. It's not something we can know with absolute certainty and it's not our decision to make, but God is love, we know that and that Bob Marley received the last rites of the Orthodox Church gives us more hope for his salvation than had he received none. 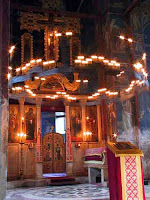 May 11 marks the 30th anniversary of the passing of Robert Nesta Marley, more popularly known as Bob Marley. He’s known by other titles as well: “The king of reggae,” “the first Third World superstar,” “The Honorable Robert Nesta Marley,” and, by Rastafarians, as “The Prophet,” or “The Teacher.” There have even been efforts by Jamaicans for him to be declared a national hero.

What many don’t know is that Bob Marley can also be called a Christian. He was baptized into the Ethiopian Orthodox faith before his death in 1981.

Bob Marley had become a zealous Rastafarian as a young man. The dreadlocks and pot smoking that became central to his image weren’t just accessories to a rock star lifestyle. They were pillars of Rastafarian faith. Rastas believe that cannabis removes mental barriers to enlightened thinking, and they base their dreadlocks in Old Testament law. As debatable as these doctrines are, it’s clear that a sincere faith in God and service of his people were the driving forces in Bob’s life and music.

One doesn’t have to dig deep into his lyrics to see Marley’s faith. In “One Love,” named the song of the millennium by BBC, Bob sings, “Give thanks and praise to the Lord and I will feel all right.” And in songs like, “Forever Loving Jah” (“Jah” is the Rastafarian word for God), Marley is clearly praying, not just performing. Praise to “Jah” can be found throughout his music. Bob wasn’t just a secular rock star. It’s probably more accurate to say he was a religious musician who had made it in the secular world.

Read the rest of the article, here.
Posted by Tancred at 8:09 PM 1 comment: