The Shepherd's Staff in the Knapsack -- Careerism and Curious Episcopal Appointments 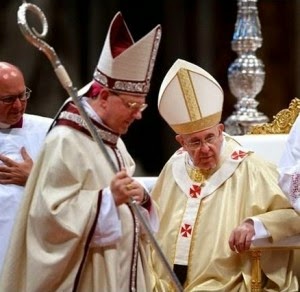 (Vatican) in May 2013 Pope Francis designated careerism and vanity as the "leprosy of the Church." In the era of neuro-linguistic programming all seem competent  to  speak, but then ... it seems the Pope is not averse to quick and sometimes inexplicable Promotions. This is true not only for Battista Ricca, but for Francesca Chaouqui or Vallejo Balda.
Marco Tosatti is concerned with two of the most recent promotions. These proposals are  not easy to understand. One of them is the Italian Fabio Fabene. His personal rapid rise can also be seen in relation to Pope Francis' desired "upgrading" of the Synod of Bishops as a sort of participation committee. The other is the Brazilian Ilson de Jesus Montanari. Pope Francis appointed  the Prefect of the Congregation for Bishops, Cardinal Marc Ouellet, unlike Cardinal Piacenza not  down from his office, but provided him with Montanari a man of his personal choice at his side.
.

The Shepherd's Crook in his Knapsack

by Marco Tosatti
"Every French soldier carries a marshal's baton in his knapsack." One of the most famous sayings of Napoleon could be - you swap the baton with the pastoral staff of Bishop - also applied to the Curia of Pope Francis.
In recent days, he promoted Fabio Fabene, the new Under Secretary of the Synod of Bishops, to the Episcopal rank. An appointment, about which not a few were astonished at the Roman Curia. It has not been common for a sub-secretaryto be a bishop. A snap decision, that comes your way in a double pack with that of Ilson de Jesus Montanari, who was raised (Secretary of the Sacred College, and at the same time) from a simple clerk second class secretary of the Congregation for Bishops, to the rank of archbishop.
Lightning careers which according to some, those who know the world of the Vatican palaces well, its explanation is in a man: the Secretary of the Synod of Bishops, Cardinal Lorenzo Baldisseri. Baldisseri, formerly Apostolic Nuncio to Brazil, was appointed Secretary of the Congregation for Bishops by Benedict XVI., and thus also to the Secretary of the College of Cardinals. There, a group of like-minded people was formed. This group, whose head was Baldisseri,   also included the current private secretary of Pope Francis, Fabian Pedacchio, from the Archdiocese of Buenos Aires and great friend Montanari, and also  Fabene comes too. Then Jorge Mario Bergoglio became Pope and now we are witnessing the emergence of this group.
Einleitunng / translation: Giuseppe Nardi
image: Messa in Latino

Pope Announces the Selection of the Bishop of Basel

The old Liberal General Vicar of the Swiss Bishops' Conference is taking over the completely spiritually ruined Diocese of Basel.

(kreuz.net, Basel)  Msgr  Felix Gmür is the new Bishop of Basel, according to the Vatican Press Service.

Pope Benedict XVI, had assumed the choice of the Basel Cathedral on the Feast of the Nativity of Mary on the 8th of September.

Prior to that, Msgr Gmür worked as necktie priest and General Secretary of the Swiss Bishops conference.

A further speculation of the protestant journalist and church-hater Micheal Meier, that it would have been Dennis Theurillat (60), has proven itself to be false.

He Won't be a Second Bishop St. Thomas Becket

Msgr Gmür hales from Luzern.  In May 1999 he was ordained a priest.

Previous to that - from 1997 to 2001 - he worked as the pastoral assistant and then as necktie [secular] priest of the Parish of St. Anton in Basel.

By 2004 he studied Biblical Science at the Jesuit University, the Gregorian in Rome.

From 2004 to 2006 he was active for two years as a neck tie- Subregent in the old Liberal Seminary in Luzern.

For four years he has been the General Secretary of the Bishops Conference.

Msgr Gmür will be consecrated a Bishop on January 16th in Solothurn.


Basel is the largest Diocese in Switzerland with over one Million members.

Editor: We said that Basel would get a "good" Bishop out of this, well, we were wrong.
Posted by Tancred at 9:47 AM No comments: