The diocese of Limburg was prohibited on 7 March 2002 from issuing  Pope John Paul II issued certifications with the children can be murdered impunity. Pro-lifers have now pointed out that the diocese of Limburg not only promotes abortion, but counseling centers of the diocese even puts pregnant women in conflict with institutions such as the Diakonie, who provide the issuance of the certifications for the murder of the unborn child that is excused from punishment by the law.
This does not happen in ignorance of the leadership of the diocese, but is explicitly praised by it. Speaking to the Hessian Rundfunk spokesman Stephan Schnelle said that it had indeed removed the advertisement for abortion from the diocese page according to reporting by Katholisches.info, "the revision is no criticism of the work of Diakonie," they have been collaborated confidently together for years. Since there are numerous counseling institutions that counsel pregnant women in conflict to Catholic teachings, the promised collaboration with Diakonia can only mean the issue of abortion certificates, which was explicitly forbidden by Pope John Paul II. At any rate, the head of the diocese does not mind that the Diakonie issues certificates to kill unborn children.
This is in line with the reports of counselors from organizations that work according to Catholic standards. Many pregnant women in the conflict are dissatisfied because of the poor advice and, above all, make contact via Internet with more sound counseling centers. It is often said by the women that they are sent fairly quickly by the counselors, who are not allowed to issue a certificate, to other places so that they receive the abortion certificate there.
Just one parenthetic observation. During the image research, the author came to the press photos page. A picture of Bishop Franz-Peter Tebartz-van Elst can not be found, whereas Bishop em. Dr. Franz Kamphaus appears. This too is a clear statement.
Text: Linus Schneider
Photo: Bistum Limburg
Trans: Tancred vekron99@hotmail.com
AMDG
Posted by Tancred at 4:34 PM 7 comments: 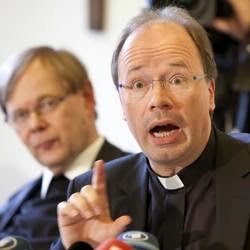 (Trier) The "shocking" statements by Bishop Ackermann of Trier are currently in the ears and  bode little good for Germany's Catholic Church to expect. Whoever  today is willing readily to throw almost all of the sexual ethics of the Church over board, tomorrow will be ready to betray the whole of Catholic doctrine.  This conclusion was reached by Catholic journalist Mauro Faverzani, who reported for Corrispondenza Romana on the controversial Ackermann interview. Bishop Ackermann and in slightly different wording of Munich's Cardinal Reinhard Marx,   "wash my fur, but do not make me wet" seem to have found a new use for the saying. Given these and other omissions of bishops of the German-speaking countries, in Switzerland and Austria, things are quite similar, the question arises: Where  the Nuncios find only those bishops?

The Twisted and "Rewritten" Moral Teaching of the Church

The shocking words of Bishop Stephan Ackermann, Bishop of Trier, with the destructive effects of an overflowing   river causing suffering and pain: after they have broken through the dams of faith, they have devastated the Catholic doctrine, hurt the sensibility of the faithful and  confused everyone. All this with the usual complicity of an interview, this time by the daily newspaper "Allgemeine Zeitung".

According to a recent survey, the Catholics of the German dioceses would consider the sexual ethics of the Church as unworldly. Asked for an opinion, made Bishop Ackermann no secret of wanting to throw in the truest sense of the word, the entire rules and commandments overboard: "We need to strengthen the sense of responsibility of people, but then also respect their decision of conscience". One marvels and wonders when and where Jesus Christ may have probably taught his disciples. On the question of the admission of divorced remarried to the sacraments the bishop said: "We are here to make suggestions," just as if not to be all set since always clear and distinct.
For premarital sex Ackermann said almost apologetically: "We can not completely change the Catholic doctrine, but develop criteria by which we say: In this and this particular case it is justifiable. . It's not that there is only the ideal on the one hand and the condemnation on the other side "Obviously, playing what the Catholic Church teaches, for the German bishop not matter ... to family planning and contraception, he said:" The distinction by natural and artificial contraception is somehow artificial. I'm afraid that no one understands more. "

Appeal to a Sense of Responsibility and Respect Decisions

And as for homosexuality should the Church, according to Ackermann, appeal to the sense of responsibility of the individual: "The Christian view of man goes by the polarity of the sexes, but we can not simply say that homosexuality is unnatural."  But homosexuality should not be lived in promiscuity and gratification. Where the bishop may have only won his findings? Although the church emphasize the uniqueness of marriage between man and woman, but if a registered partnership, distinguishing by loyalty and responsibility, "then we can not ignore this responsibility," said the Bishop of Trier. After all, it is amazing, the blessing of homosexual couples as among the Protestants is  still yet  "not our solution." Truly a disconcerting bishop.
Priestly celibacy is still canonically "no dogma", but he was in favor of maintaining it. As for the future, however,  he  says he could not predict,  weakly added  the bishop immediately.

What is certain, however, today, is the ambiguous and provocative behavior of the German Church, especially in matters of morality. On this theme,  the German Dioceses have put on the accelerator pedal and keep trying to stir up new conflicts to give rise to fault lines and tear open breaches. A sentire cum ecclesiam with the German side is no longer apparent.  Not surprisingly it's just in Germany and indeed in Frankfurt am Main in the parish of Maria Hilf there is a presently self-constituted community of homosexual believers. The whole thing runs under the motto "Gay and Catholic," but also stands open for "lesbian, bisexual, and transgender." The result was the "Project" to "reduce pain" those who had been inflicted on homosexuals by the teaching of the Church. The Church authorities are accused of a lack of understanding and only because it teaches what is the teaching of the Church as it was entrusted by tradition and written for Her  by God. The outlandish Frankfurt "experiment" was endorsed by the Emeritus  Bishop of Limburg, Franz Kamphaus. The homo-believers and the associations supporting the Catholic ground staff in Frankfurt cared not a whit to the heavy criticism that has been voiced by his successor, Bishop Franz-Peter van Elst Tebartz against the special community. [At last, some insight as to the true reason for Bishop van Elst's treatment by the "Catholic" press, as insidiously in the service of the enemy as always.]

There were Columns of Flame from Satan Coming Through "Cracks"  in the Church: Paul VI.

For the theologian Gregory Schorberger took all the more extreme, even excessive benevolence of the gay community and catholic project. In his dissertation he described it as important that homosexual believers possess a recognized place where they know they are also accepted by the local clergy. There are already efforts to set up similar special communities in other German dioceses. In 1972, Pope Paul VI. in a prophetic moment, described the cracks through which the "smoke of Satan" had entered the church. These columns show itself as large cracks and the smoke was only the first sign of that destructive activity of the infernal flames that caused these cracks.
Introduction / Translation: Corrispondenza Romana / Giuseppe Nardi
image: Corrispondenza Romana
Trans: Tancred vekron99@hotmail.com
Link to katholisches...
AMGD