Edit: Old Liberal Bill Donahue has long run interference for decadent Old Liberal Bishops as a professional Catholic. His Civil Rights, cultural Marxist whiner organization does just about everything EXCEPT defend the Catholic Faith. Sometimes it even attacks real Catholics.
Here he is again, and an open letter from Remnant to this barnacle:
“These crazies are mad at Wuerl because he doesn’t believe in using the Eucharist as a weapon to smack liberal Catholic politicians. Wuerl has said that the refusal of Holy Communion “should be made only after clear efforts to persuade and convince the person that their actions are wrong and bear moral consequences.” Exactly. Wuerl is a great gift to the Catholic Church. These critics are as ignorant as they are malicious.” . . . Bill Donohue, “RIGHT-WING NUTS RIP CARDINAL WUERL”

You have publicly stumbled (I hope it was an unwitting stumble) into endorsing, quite explicitly, a mortal sin.

The mortal sin in question is: giving Communion to a person who is obstinately persisting in manifest grave sin. It is a grave sin of scandal because whenever a minister of Communion gives such a person Communion, he: 1) publicly collaborates, with knowledge, in the commission of a sacrilege; 2) gives public approval to the communicant's notorious grave sin.
http://remnantnewspaper.com/web/index.php/fetzen-fliegen/item/2171-an-open-letter-to-bill-donohue
Posted by Tancred at 11:45 AM 2 comments:

[Catholic League]One of the AP stories on priestly sexual abuse admits that "The overwhelming majority of the victims were adolescents. That means very few guilty priests were pedophiles, a term mental health professionals reserve for those who target pre-pubescent children." Fine. But then it says something which is positively remarkable: "Even though about 80 percent of victims were boys, the John Jay researchers and other experts on sex offenders say it does not mean the perpetrators were gay." So what would they be? Heterosexual?

The AP article relied on the extraordinary remark by Margaret Smith, a professor who worked on the John Jay study. She said that while Donohue "quoted the study's data correctly," I nonetheless "drew an unwarranted conclusion." What? That most of the molesters have been gay? Here is what she said: "The majority of the abusive acts were homosexual in nature. That participation in homosexual acts is not the same as sexual identity as a gay man." So if two men sodomize each other, no one really knows if this qualifies as gay sex. Now I must admit that when I was studying for my doctorate in sociology at NYU, they never taught me such logic.

In other words, even though priests have less access to males, homosexual priests are molesting them at a higher rate. It's time to end the gay cover-up once and for all.

Posted by Tancred at 1:06 PM No comments:

TV producers have been telling me for years that my critics have implored them never to invite me back on any program. But they always do. While the media are overwhelmingly liberal, they have an obligation to offer different points of view. [Yours being the official opposition view] Hence, their non-stop invitations asking me to speak.

The latest attempt to silence me comes from GLAAD (Gay & Lesbian Alliance Against Defamation), Call to Action and the Interfaith Alliance. The three left-wing organizations have joined hands demanding that the media "ignore Bill Donohue." Their complaint? My telling the truth about the role homosexual priests have played in the abuse scandal. [Which is a welcome thing indeed]

The data collected by John Jay College of Criminal Justice show that between 1950 and 2002, 81 percent of the victims were male and 75 percent of them were post-pubescent. In other words, three out of every four victims have been abused by homosexuals. By the way, puberty, according to the American Academy of Pediatrics, begins at age 10 for boys.

No problem can be remedied without an accurate diagnosis. And any accurate diagnosis that does not finger the role that homosexuals have played in molesting minors is intellectually dishonest. The cover-up must end. And so must attempts to muzzle my voice. Everything I am saying is what most people already know, but are afraid to say it. It's time for some straight talk.

link to original...
Posted by Tancred at 7:58 AM No comments: 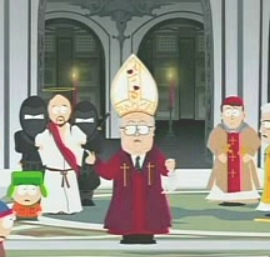 Posted by Tancred at 4:13 PM No comments:


Catholic League president Bill Donohue looks at Hollywood’s treatment of the apocalypse in “The Book of Eli” and “Legion”; the former opens January 15, and the latter a week later:

By all accounts, “The Book of Eli” puts a positive spin on Christianity. The lead character, Eli, is played by Denzel Washington. Following a nuclear war which destroyed all copies of the Bible, save for the one in his possession, Eli is determined to get the last copy on the planet to a place directed by God; previous religious conflict destroyed all copies of the Torah and Koran. To be successful, Eli must keep the Bible away from a reigning tyrant who is hell bent on getting his hands on it so he can twist biblical teachings to suit his interests.

By all accounts, “Legion” puts a negative spin on Christianity. It features Michael the Archangel crashing down from the heavens to save the unborn child of a Virgin Mary-like character, a waitress who is anything but virginal. Indeed, actress Adrianne Palicki plays such a loose character that she said in an interview, “Who didn’t I have sex with in the movie?” No matter, the film suggests God is the father of her Jesus-like messiah child. The entire story takes place on Christmas eve.

Both movies are violent, and both scripts seize on the apocalypse. But that’s where the similarities end. It is telling that Sony is responsible for the film that is not exactly Christian-friendly (Warner Bros. is releasing “The Book of Eli”). Sony, of course, gave us “The Da Vinci Code” and “Angels & Demons,” so it knows how to tweak Christian sensibilities. It is so fitting that “Legion,” which promises to be an abortion of a movie, is opening on January 22, the 37th anniversary of the infamous Roe v. Wade decision.

Link to original...
Posted by Tancred at 8:18 PM No comments:

Back in June of 2008 Bill Donahue of the Catholic League recently gave a glowing report of Archbishop Nienstedt's efforts to curtail the promotion of Homosexuality at the parish of St. Joan of Arc. Despite his timely intervention, the parish's administration and problematic direction remained. It's as though a surgeon only treated the symptoms of a cancer destroying his patient's immune system, leaving the root cause of the disease untreated. So, two weeks ago, the Parish of St. Joan of Arc hosted the Twin Cities Gay Men's Chorus to "celebrate the inner child".

It is becoming more clear as his administration continues that Archbishop Nienstedt is erecting a Potemkin Archdiocese to appease local and vocal conservative voices, and Rome, while attempting to avoid at the same time alienating big liberal donors like the Pohlads. He previously permitted a pro-homosexual speaker, organized by Terri Griep, facillitator of CCCR and a writer at the Archdioces' paper, the Catholic Spirit, to speak at Our Lady of Grace Parish.

There was no outcry when the Gay Men's Chorus used St. Joan of Arc Parish and Archdiocesan property, promoting homosexuality against the Archdiocese's speaker policy, Bill Donahue's posturing notwithstanding a year ago, nothing has been done.

Here's what was said then, so much for those empty words; the same problems are well in place:

“The attacks on Archbishop Nienstedt are vicious. One local gay Catholic leader, David McCaffrey, has said that Nienstedt is guilty of ‘yet another volley of dehumanizing spiritual violence directed at LGBT persons and their families under [his] reign of homophobic hatred.’ This is a remarkable comment given that Nienstedt didn’t take over as archbishop until last month.

Leave it to Bill Donahue to ride his Civil Rights advocacy group into the fray, using bad laws and their attendant errors to "defend" the Catholic Church.

The FBI issued its most recent statistics on hate crimes on Monday -- and they showed a slight uptick in hate crimes against religious groups in 2008.

Last year, there were 1,519 incidents against people based on their religion, a 9% increase from the year before.

While anti-Jewish attacks make up the bulk of the incidents -- one out of every six -- there was a spike in hate crimes against Catholics.

There were 75 incidents against Catholics, up from 61 the year before.


"Unfortunately it spills over into violence," he says.

And Donohue thinks it's just going to get worse before it gets better.