Anniversary of the Battle of Tours: Another of the West's Victories Over the Islamic Threat Which Continues Today 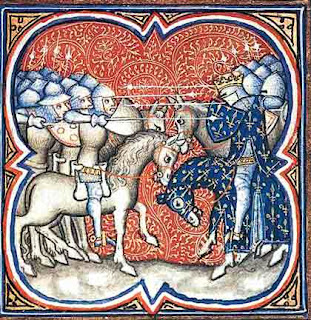 Edit: On 732 the Battle of Tours took place at nearby Poitiers, France. The King of the Franks, Charles Martel and his men, defeated a large army of Moors, stopping the Muslims from taking over Western Europe. This would be an opportune time in the Synod to discuss the importance of raising properly catechized children in the face of threats from within and without both new and old.


But at dawn, Charles and his men discovered that the Muslim army had vanished, leaving the booty stolen from ransacked churches behind, as well as 10,000 of their dead – including Abd-ar-Rahman himself. It was not the last Muslim incursion into Europe, but it was the beginning of the end.

Some contemporary historians downplay the magnitude of the Muslim threat, claiming that Abd-ar-Rahman’s force was only a raiding party. They minimize the significance of the battle’s outcome, too; at least one historian even claims that Europe would have been better off if Islam had conquered it. But Hanson notes that “most of the renowned historians of the 18th and 19th centuries… saw Poitiers as a landmark battle that signaled the high-water mark of Islamic advance into Europe.” Edward Creasey included it among his The Fifteen Decisive Battles of the World. Many believe that if Charles – whom the Pope afterward dubbed Martel, or “the Hammer” – had not stopped Abd-ar-Rahman at Tours, there would have been nothing to prevent Europe from ultimately becoming Islamic. Edward Gibbon called Charles “the savior of Christendom” and wrote in The History of the Decline and Fall of the Roman Empire in 1776 that if not for Charles’ victory, “perhaps the interpretation of the Koran would now be taught in the schools of Oxford.”

If only Gibbon could see Oxford now. Not only is the interpretation of the Koran taught there, but Islam thrives in Oxford, thanks partly to the patronage of dhimmi Prince Charles. In his essay “Islam in Oxford,” faux moderate Muslim scholar Muqtadar Khan writes smugly that “Gibbon would have been surprised to learn the lesson that military defeats do not stop the advance of civilizations and the globalization of Islam is unimpeded by the material and military weaknesses of the Muslim world.”

Apart from his dubious suggestion that Islam has anything to do with the advance of civilization, Khan is right. Today the Islamic invasion of Europe and the rest of the West is of the demographic, not military, sort. The continent faces an immigration crisis from at least one generation of young Muslims, many of whom not only are willfully unassimilated, but who are waging cultural and physical aggression against their hosts, establishing parallel communities ruled by sharia and “no-go” zones of violence toward infidels. “Nothing can stop the spread of Islam,” insists Islamic apologist Reza Aslan. “There are those who would try, but it simply will not happen. Absolutely nothing can stop the spread of Islam.”

Link to Front Page Mag... Photo from Medieval Monday...
Posted by Tancred at 4:35 AM 18 comments: