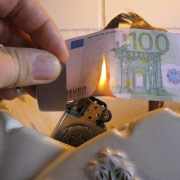 Posted by Tancred at 6:34 PM No comments:

The Monastery in the Ardennes was founded personally by St. Bernard of Clairvaux himself.  Now the talk is of savings accounts.

This was recently reported by the website of the Cistercian Cloister Himmerod.

On the 12th of August the Operation filed for insolvency at the district court of Wittlich.

The Cistercian Cloister Himmerod is located in the Ardennes. It was founded in the years 1134/35 by St. Bernard of Clairvaux.

It is located in the municipality of Manderscheid -- 56 kilometers north of Trier.

Today there are thirteen Monks living in the Cloister.

Since January the Cloister has been directed by an administrator, Father Stephan Senge.

It operates a museum with rotating art exhibits, a book and art store, a guest area, a guest and meeting hall.

AFter losses of more than 200.000 Euro during the years of 2008 and 2009, employees must be dismissed and special projects like the fish farm must be closed.

The leadership of the Subsidiary Company of the Cloister foresaw after talking to Counsel, to apply for bankruptcy, in order to protect the Abbey from enormous debts.

The Monastic life of the Monks is not going to be effected by this step.

On Tuesday the website of the Cloister announced that events, guest invitations, reservations and all further dealings will take place in the customary and planned extent in Abbey Himmerod.