Edit: This news is challenging. Father Schmidberger was also firm, but milder in his estimation.

Edit: was alerted to this development. Apparently, Asssisi III isn't on the Holy Father's calender.

VATICAN CITY, SEPT. 27, 2011 (Zenit.org).- Benedict XVI will preside at a canonization Mass and make at least one pastoral visit within Italy in October, and in November he will make his second international trip to Africa, reports the Vatican.

Today, the Office of Liturgical Celebrations of the Supreme Pontiff published the Pope's event schedule for the months of October and November.

Missing from the schedule is the previously announced pilgrimage to Assisi on Oct. 27, which will mark the 25th anniversary of the World Day of Prayer for Peace, convoked by Pope John Paul II in 1986. The day is being organized under the title "Pilgrims of truth, pilgrims of peace."
Posted by Tancred at 12:43 PM No comments:

Pope Benedict on Assisi 3: "Have Trust"

You heard it here first. Assisi 3 will be the attack on relativism. 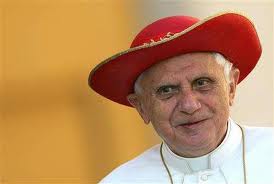 Edit: we just found a referring article describing the Assisi 3 event.  We picked up a letter written by a Lutheran minister who is a friend of the Pope on April 24th from kreuz.net, two days before Rorate got it. The Lutheran minister describes the Pope's intention with Assisi.

Rorate has entitled their most recent article, "Pope explains why he's going to Assisi 3".    Katholisches is much more accurate, and frankly, just.

Many of those commenting at Rorate don't seem to understand the article, or believe that the Pope is in earnest.  The Pope's words themselves are actually quite shocking and unprecedented.

Of course many "Traditionalists" don't appreciate that the Pope is actually attempting to the address their concerns.  Maybe it's just shellshock?

This should be taken in with other statements by various officials and actions in recent years on the part of the Pope himself when he more than met the hopes of the SSPX with respect to Summorum Pontificum, on the part of individual Bishops, even Liberal ones, Conferences and even the Vatican officials themselves indicate that this won't be anything like the previous Assisi events and will be used by the Holy Father to "attack relativism".

Benedict XVI. on Assisi 3:  "Everything will be done so that a syncretistic or relativistic interpretation will be impossible".

On the 1st of October the event "Pilgrims of Truth on the Way to Assisi" took place, organized by Catholica Spes, in order to discuss considerations and concerns related to Assisi 3.

"The Holy Father wanted to underline the idea of a Pilgrimage to Truth:  not in order to pray in various ways with the danger of mixing the supernatural faith and natural religions, rather a common way back to the one truth." With these words Curial Cardinal Leo Burke explained the sense of the inter-religious meeting in Assisi will be invited by Pope Benedict XVI for the 27th of October 2011.

An excerpt from katholisches...
Posted by Tancred at 3:44 PM 12 comments:

Edit: After a quick listen to the video from 'gloria.tv' and having it pointed out by a priest in Germany, Cardinal Koch says that "there will be no communal prayer at Assisi III", every appearance of syncretism must be avoided, that is to say, this won't 1989. It is said that  the Holy Father was going to use Assisi III to attack relativism. A Lutheran minister who is a friend of Pope Benedict says this. Do we see evidence for that here?  It's looking like it's coming true.

The interviewer also asks the Cardinal if he would celebrate the Immemorial Mass, and the the Cardinal sounds well-disposed to it, although he's never said the Mass himself since only being ordained in 1982.

It also should go without saying that this will address at least one of the concerns held by the Society of St. Pius X as they consider the Preamble which will bring them back into a clear and precise relationship with the Church.

Posted by Tancred at 3:37 AM No comments: