(Rome) According to leaks from the Vatican, Pope Francis intends (or has already implemented) to appoint a secret commission with the mission to examine possible changes in the position of the Church on artificial contraceptives. This was reported by the Vaticanist Marco Tosatti last week.
The demand was linked to the current pontificate by progressive Church representatives. Pope Francis so far made ambivalent signals on Humanae vitae .

Concretely, the issue was to examine the Encyclical Humanae vitae by Pope Paul VI. with a possible revision.The former Archbishop of Milan had reacted with the encyclical on the anti-baby pill, the sexual revolution and the killing of unborn children by abortion. He did it in the middle of the 68-Revolt, which had just broken loose. On July 25, 1968, he published the encyclical Humanae vitae, with a "prophetic message," as Pope John Paul II says in 1981 in the post-synodal letter Familiaris consortio. Pope Francis also spoke of "prophetic geniality" in an interview of March 5, 2014 with the Corriere della Sera. Contradictory signals from the current Pope, however, do not allow an exact classification of his attitude to ( Karnickel , Zika virus and what Paul VI never said). Although he praised the "geniality" of the encyclical on the one hand, he found praise for the German moral theologian Bernhard Häring, one of the sharp critics of Humanae vitae .

(Rome) Curia Bishop Jean Laffitte remains, at least for the time being, the secretary of the Pontifical Council for the Family . His appointment last July 4 by Pope Francis to Prelate of the Sovereign Order of Malta sparked speculation about his dismissal in the family council.
"Good news," said the well-known Catholic Spanish blogger Francisco Fernandez de la Cigoña with good wire to Vatican sources. The personnel decision  before the "decisive Synod of Bishops on the family," said Riposte Catholique, "is not meaningless."
As secretary Msgr. Laffitte holds the second most important office in the pontifical "Family Affairs". The Frenchman Laffitte belogns to the Emmanuel Community , and is considered a serious defender of the marriage sacrament. The same can not be said of his immediate superior Archbishop Vincenzo Paglia.
The Italian Paglia belongs to  the Community of Sant'Egidio. He has fallen, since Benedict XVI., announcing his resignatio, into  homophilic statements, as on June 25 at the press conference to present the World Meeting of Families, which takes place  in September in Philadelphia (USA). With a "slick set" ( Riscossa Cristiana )   the Vatican's "Family Minister" signaled an acceptance of homosexuality (see Before the synod: Family Minister "Flashes" Homophilic signals - Vice is Maltese Prelate ).
Text: Giuseppe Nardi
Image: Riposte Catholique
Trans: Tancred vekron99@hotmail.com
Link to Katholisches...
AMDG
Posted by Tancred at 7:35 AM 6 comments:

Investigations Against the President of the Pontifical Council on the Family and Casperian, Archbishop Paglia 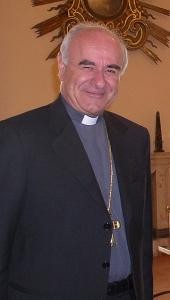 (Rome) Curial Archbishop Vincenzo Paglia has not made  a good impression around the Synod of Bishops on the family, although he has been President of the Pontifical Council on the Family  and would thus be obliged of his own accord, to defend Catholic doctrine on marriage and family life. Currently the 70-year-old prelate has received an investigation notice.  The leadership of the Community of Sant'Egidio are being investigated by the prosecution Terni. The Archbishop is accused criminal association for the purpose of illegal appropriation and manipulation of an auction in connection with the purchase / sale of castle San Girolamo di Narni.
The investigation had already begun in July 2013 with the arrest of the former head of the technical office of the Diocese of Terni-Narni-Amelia, Luca Galletti, the former Treasurer of the Diocese, Paolo Zappelli,  and the head of the city building office Paolo Zappelli, Antonio Zitti. The purchase / sale of the castle is supposed to be in the context of the financial hole the diocese of 20 million euros. A financial gap which dates back to the time when Archbishop Paglia served as Bishop of Terni-Narni-Amelia  in 2000-2013.
There have been no charges filed as yet against the Archbishop. Therefore, he must be presumed innocent. The news that  there is an investigation against the top representatives of the Community of St. Egidio, has spread around like wildfire made in the Umbrian capital. 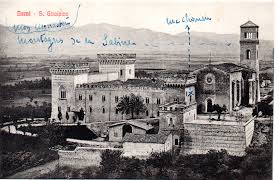 Castello San Girolamo of Narni
The investigations relate precisely to the time when Paglia  was Bishop of Terni and Narni. When he became President of the Pontifical Council on Family in Rome in spring 2013, it came out that he left his diocese bankrupt. The bishop climbed the corporate ladder and left  his diocese sitting on 35 million euros in debts. In relation to the  small population of156,000 baptized in the small central Italian diocese, it seems this could be a negative world record. Where millions have flowed, no one knows and those who know are silent.
Being investigated are   a number of cases, including the suspicious purchase of Castello San Girolamo of Narni. The medieval castle was used  for centuries as a Franciscan monastery and has been, like all monasteries in Italy expropriated in 1860 by the new [Masonic] Italian government. After several changes of ownership and being owned by the local community, it served Narni after the Lateran Pacts for half a century as a training center for missionary orders. Since the 70s the declined  until it was amazingly, bought by the diocese of Terni Narni for nearly two million euros in 2010. To be precise, it was acquired by the diocesan Institute for the maintenance of the clergy with the even more astonishing intention to make a four-star hotel of it.
In summer 2013, the prosecutor's office started investigations, which led to the arrest of several higher diocesan officials.So far, however, the bishop has remained unmolested. That seems to have changed after 22 months of investigation.

Where other bishops Have Long Been Dismissed, Paglia Furthers Career

Since the opaque financial management has already been known at the Vatican, it's astonishing that  Paglia continues as Chairman of the Family Council. A decision which. It's a decision which, may not be  foisted on Benedict XVI.  The protection is attributed to  the then Cardinal Secretary of State Tarcisio Bertone. Other bishops who are "conservative" were simply dismissed for far less from their duties. However, there are a variety Church representatives of the "liberal" stamp,  know how to always sleekly swim to the top.  Archbishop Paglia and the Community of Sant'Egidio belong to this species. Although they tend to be progressively aligned, they managed to make careers under Popes John Paul II., Benedict XVI. and Pope Francis.
The prime example in the German-speaking world for doubtful personnel decisions of Benedict XVI. is Munich's Archbishop Cardinal Reinhard Marx.s
The Community of Sant'Egidio goes back to the controversial Assisi interreligious meeting, their first meeting with papal involvement in 1986 which included syncretistic elements, scandal and church desecration  (see Holiness, move away from the Spirit of Assisi -. Open letter to Pope Benedict XVI and Angela Merkel Visits Sant'Egidio, the "Parallel Diplomacy" of the Vatican ). [Both in German]
Although it has been indicated several times by  Pope Francis, that there would be a comprehensive reorganization with the Pontifical Councils and although Paglia is increasingly involved in embarrassing and compromising news from Terni, which even concerns the Vatican bank IOR, the prelate of a small town about 100 kilometers east of Rome is still at the head of the Pontifical Council on the Family and enjoys the confidence of Pope Francis.

Even at his first press conference as President of the Roman dicastery, there was a scandal when he spoke out in favor of a state recognition of registered partnerships, even homosexual ones.
As the financial scandal in early 2013 became known in Terni,  the Holy See sent Msgr. Ernesto Vecchi, an emeritus auxiliary bishop of the Archdiocese of Bologna as Apostolic Administrator. His task was to restore order in the Diocesan Finance. A few months ago the diocese again has Msgr. Giuseppe Piemontese  as diocesan bishop. Both Administrator Vecchi and the new bishop have fully cooperated with the investigating authorities in order to shed light on the scandal and to clarify responsibilities. It will be  determined who is responsible for the debts of the diocese and for a number of suspicious sales of diocesan property.
"The whole thing is still largely opaque and could be related to other cases, whose  center was Terni," said Nuova Bussola Quotidiana .

Curial Archbishop Paglia is, next to the founder and first president, Andrea Ricciardi,  the most important figurehead of the Community of Sant'Egidio.  Although he has no longer been president for many years, the Charlemagne Prize holder and perennial Italian Minister Ricciardi, still is considered a dominant force in the community founded in 1968. His successor Marco Impagliazzo participated on Whit Monday as the sole representative of a "New Community" at the secret meeting of Kasperians at the Gregorian University in Rome. Meanwhile, Archbishop Paglia took part as President of the Pontifical Council on the Family  at the Vatican meeting of the Synod Council convened by the Pope in preparation for the Synod of Bishops. Everywhere, well informed, always on the ball.
Although a possible question of guilt has to be clarified in the investigation against the Kasperian Paglia, from the view of the rebel faction it is nontheless inconvenient for the approaching Synod of Bishops.  This is true for the people involved, the Pontifical Council on the Family and the Community of Sant'Egidio.
Text: Giuseppe Nardi
Image: NBQ / Filetelia Umbria
Trans:  Tancred vekron99@hotmail.com
Link to Katholisches...
AMDG
Posted by Tancred at 8:46 PM 10 comments: