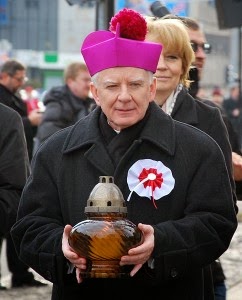 (Warsaw) Polish bishop finds clear words against the gender ideology and is showered with insults from anticlerical circles. The gender ideology is the "direct path to the self-destruction of our civilization."

The Polish Archbishop Marek Jedraszewski of Lodz defended the differences and complementarity of man and woman at a meeting with young people. The Archbishop tried to reject the attempt to flatten "the great and unique differences between man and woman that God thought of so wonderfully."

"2050 Whites Will be Put on Reservations": "They are planning that they will cease to exist of their own desire."

The archbishop said he could well imagine if the gender ideology should prevail, that "the few who continue to hold to the fact that man and woman are indeed equal as human beings and are fully equal in dignity, but have a different sex, and that's a good thing, will be put as Indians are in reservations by 2050." Archbishop Marek Jędraszewski is known for his vivid and clear language. He told young people at a youth catechesis in Pabianice near Lodz about the importance of accepting one's own gender and to defy every misanthropic egalitarianism.

The former theology professor had put the gender ideology at the heart of his speech, "which has become fashionable in recent years. To be exact, it's the only valid ideology according to political correctness," said the Archbishop. The gender ideology is an attack against "gender identity" of man as male and female and for an attack against the family and the generation of children. "It is an extremely dangerous ideology that leads directly to the death of our civilization," said Msgr Jędraszewski. He could therefore imagine, if he also hopes not to experience it personally, that the few surviving whites, the smallest of the other races here in Europe will be presented as a sensation in 2050. "Behold how the people looked, who once lived there and those who have ceased existing at their own request, because they did not accept themselves biologically." The problem is mainly a problem for Europeans and thus it is also to be found in North America and Australia.

"After Us,  May Come  the Deluge" By Gender Ideology

The denial of God is unmistakable behind the gender ideology, and it is the base engine of this "ideology of self-destruction." For it is God who "created man as man and woman," said Archbishop Marek Jędraszewski. "He created them for a life together, not that each go his way, and not for homosexuality, but for the second unit, for marriage, so that they beget children, continue to give life and rule the world. Then perhaps the deluge might come after us," said the archbishop.

The speech by Archbishop Marek Jędraszewski of Lodz led to savage attacks against Church representatives. Anti-Church papers shower him with criticism and personal attacks. Considering the reception of what the Archbishop says, the Metropolitan had obviously hit the mark.

Archbishop Marek Jędraszewski was born in 1949 in Poznan. After his consecration, he worked in pastoral ministry and as a professor of theology. In 1997 Pope John Paul II appointed him auxiliary bishop of Poznan. In 2012 he was made Archbishop of Lodz by Pope Benedict XVI.