The CDF is Preparing a Statement Against the SSPX

Edit: Archbishop Müller is in the habit of overstepping his mandate.

(Vatican) The Prefect of the Congregation of Doctrine and the Faith, Archbishop Gerhard Ludwig Müller, was angry about the recent declaration of the three bishops of the Society of St. Pius X. This was reported by the dts news agency , citing the weekly magazine Focus. The bishops of the SSPX had issued on the anniversary of their episcopal ordination 25 years ago, a joint statement, in which they accused Rome with sharp words of being a being in the grip of a "Liberal spirit". In particular, the New Mass and the positions of the Second Vatican Council were objected to, ecumenism, religious liberty, and collegiality. The explanation was offered that this was a rejection of further talks with the Holy See. The SSPX itself, does not want it so understood.

So it seems, however, that this years acting Prefect of the CDF, the former Bishop of Regensburg, is the way he has understood it. According to Focus, the CDF is preparing a statement against the SSPX. To explain, says Focus , Archbishop Müller is reported to have said: "Well, but it's enough really."

Archbishop Müller: No Foundation or Need for Deaconesses

(Osnabrück) Curial Archbishop Gerhard Ludwig Müller, the Prefect of the Congregation of Faith, issued a clear rejection for a demand by progressive Catholic circles for a women's diaconate. "The sacrament of Holy Orders in the stages bishop, priest, deacon can only be validly received by a man according to Catholic doctrine," Müller told the Catholic news agency KNA in an interview for the German church newspapers.

Recently, demands had been raised, which was not always clear whether deacons and thus women, were called to the ordained ministry, or deaconesses, and there was a special office as such in the early church, but that was not associated with a consecration. Archbishop Müller sees no basis for an office of sacramental ordination after the model of the early church deaconess.

Deaconesses, says Müller, were apparent in the old church at times and in different regions. But these did "not receive the sacrament in the strict sense." They were introduced out of reasons of necessity and played an important role, "because priests were not allowed to attend women at home or in hospital wards." However, these tasks are no longer necessary, because the reasons for it were withdrawn.

In February, Cardinal Walter Kasper had proposed the consideration of a "community-deacon." The remarks sparked criticism because the word deacon, or deaconess place a subliminally intended ordained ministry. "It may prove to be that there is a specific office in the Church today, but not a sacramental office of Women for Women's needs," said the now Prefect of the Congregation.

Archbishop Müller also reiterated the statement of Cardinal Reinhard Marx, Archbishop of Munich, and also spoke out against the Catholic Church's retreat from the hospital system: "The retreat mentality is contrary to the nature of the Church as a missionary [militant?] Church." Caritas, says Müller, as Prefect, is a constitutive characteristic feature of the Church. 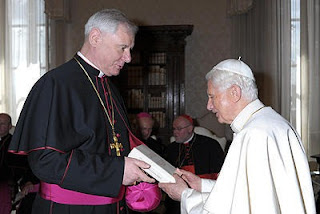 As before, Cardinal Marx and Curial Archbishop Müller contradicted, without naming them, the Cardinal Paul Josef Cordes and Cologne psychiatrist and theologian Manfred Lütz, who just appeared in a jointly written book, demanding the transformation of Catholic hospitals, because too many people work at Catholic hospitals who were not Catholic and would not identify with the Church. This creates problems of "employer authority."

Growing up in a secular environment, people can not simply be blamed if they might not be at Mass every Sunday, said Müller. "We want to convince rather by example," said the Prefect of the Congregation.

The former Pontifical Catholic University of Peru, whose acronym of PUCP has shrunk in UP, does not have enough teachers who are willing to teach without church permission at the university.
The outcome of the meeting chaired by Cardinal Bertone was a "serious blow” all around to the new Prefect, such as Andrés Beltramo Álvarez wrote for Vatican insider. To the Roman Curia  the question is whether the "new German” in Rome "is really the right man for such a central post, which requires maximum discipline and allows neither improvisation nor formal or editorial errors".
Text: Giuseppe Nardi
Image: Corrispondenza Romana
Katholisches….
Posted by Tancred at 9:54 PM 7 comments: