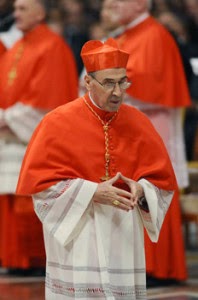 (Vatican)  Kasper has been slowly forming resistance behind the lines.  This is according to Archbishop Carlo Cardinal Caffarra of Bologna in the newspaper Il Foglio and Cardinal Walter Brandmüller in the daily newspaper The Daily Mail, a third wearer of the Purple  has publicly and thoroughly taken a position on the issue of remarried divorcees. And he opposes himself against the theses of Cardinal Walter Kasper, who was the only speaker at the recent Cardinal consistory of February 20 and 21 at the request of the Pope. Kasper was therefore able to give his opinion from a privileged position.
A position that secured him a considerable advantage in the public debate.  Or would have had at least, if the historian Roberto de Mattei had not immediately countered him with a profound contradiction. Not coincidentally, it was the German Cardinal Brandmüller who publicly disagreed with the German Cardinal Kasper first among the purple hats. Everyone knows this and is disillusioned.

Now Cardinal Velasio De Paolis has taken up a feather to cross blades  with Kasper in the dispute. The well-known canon is Prefect Emeritus of the Prefecture for the Economic Affairs of the Holy See and was from the beginning, an apostolic delegate of the Legionaries of Christ.  The cardinal has expressed on several occasions his appreciation for Pope Francis.
De Paolis took advantage of this past March 27, the opening of the new judicial year at the church court of Umbria, to  challenge  Cardinal Kasper in the ring. The title of his speech was: "The Remarried Divorcees and the Sacraments of the Eucharist and of Penance" .
De Paolis counter reply is more extensive than   Kasper's paper  before the Cardinals. 40 pages  have been published in full by the church court on the Internet, the intention of the Cardinal of the Order of the Missionaries of St. Charles Borromeo (CS)  also called the Calabrians,  is trying to set his brother back on track.

"Moderator" of the church law of Umbria  is Archbishop Gualtiero Bassetti of Perugia, whom Pope Francis has made ​​Deputy President of the Italian Bishops' Conference and a cardinal.  Archbishop Bassetti was not only the only resident Italian who has been created cardinal by Pope Francis. As Archbishop of Perugia he stands in front of a diocese whose bishop's throne is not connected in accordance with the Concordat, to  the dignity of Cardinal, like Venice and Turin, whose occupants,  however, have come up empty-handed.
It was Neocardinal Bassetti, whom De Paolis invited to give the opening speech. It was also Bassetti, in the ceremony gave the floor on March 27, De Paolis in advance and said that  De Paolis'  introductions, "are valuable, and very current  as well as very enriching for us."

"What is to be Said on the Question of Cardinal Kasper?"

Cardinal De Paolis  combined these theses of Kasper together to refute them: "What's to say about the question posed by Cardinal Kasper on February 21, 2014 in the Consistory?" According to Kasper the way of the Church is to balance between rigor and laxity, a way of repentance, which flows first in the sacrament of penance, and then in the sacrament of the Eucharist. Kasper had wondered if this way is feasible also for remarried divorcees and described conditions under which in his opinion it was possible. Kasper listed five conditions and formed them into questions  on whether the remarried divorcees communion even then could be refused if they fulfill these conditions. Whereat Kasper had clearly allowed to keep the admission to communion possible and desired.
Kasper posed his "opening",  as an exception that should not be a general rule. One limitation, however, seems to serve more for the enforcement of its goal to open to remarried divorcees access to communion. As an argument  the German Cardinal also claimed, again in the form of a question, whether the worst case could be averted, such as the loss of an entire generation, namely, the children of remarried divorcees. "Life is not just black and white, but many shades," said Kasper with a less original, but trendy commonplace.

Then Cardinal De Paolis rebutted: "Apart from  good intentions, it does not seem to be possible to answer positively  to this question. Apart from the various situations in which there are  remarried divorcees, all these situations, but the same problem is common: the inadmissibility of cohabitation, "more uxorio" between two people who are not connected to each other by a real marriage bond. The civil marriage is no marriage bond in reality. According to church doctrine, it has not even the semblance of a marriage, which is why the Church speaks of an attack against marriage. Given such a situation it is not clear how one divorced  could receive sacramental absolution to get access to the Eucharist. In order to justify access to the Eucharist for remarried divorcees, reasons are often cited, which have more the appearance of good nature and legitimacy."

Among these "justifications"  Cardinal De Paolis described "pastoral" and "mercy." Against the   "misunderstandings"  associated with this, the cardinal takes his position ending with a pointed reference with the infamous comment by  Pope Francis, "who am I to judge".
"Often and with justification it is said  that we are not called to condemn the people. The judgement is in fact God's.  It's another thing though, to order to evaluate a completely different situation morally, to distinguish what is good and what is evil; to check whether or not something corresponds to the plan of God for man. This review is imperative. Given the different life situations, such as that of remarried divorcees, can and must say that we do not condemn, but to help. However, we can not confine ourselves not to condemn. We are called to assess the situation in the light of faith and the divine plan, the well-being of the family, the persons concerned and especially the law of God and His love. Otherwise, we run the risk of no longer being able to appreciate the law of God. What's more, almost to consider it an evil, since we put the blame for all evil in a law. Due to a certain representation of things it just seems as if it would make us feel better, if it were not for the law of the indissolubility of marriage. An aberration  that we can recognize in the mistakes in the way we think and argue."  This goes an excerpt from Cardinal De Paolis' rejection of Kasper's theses.
It is generally expected in Italy so that Pope Francis is going to appoint Cardinal Bassetti  soon as the new President of the Italian Episcopal Conference. Even his appointment as deputy chairman was seen as the disempowerment of the Chairman in Office of Cardinal Angelo Bagnasco.
The Vatican expert Sandro Magister is not presently of this opinion.  He assumes that Cardinal Bagnasco remains in office until the end of the regular term of office in 2017. Magister, says it is also that Bassetti  is aligned  in the group  resisting  Cardinal Kasper, because he called Cardinal De Paolis to Perugia and who already knew in advance his unambiguous rejection of Kasper-theses and approved of them, as is clear from his words in greeting and announcement of De Paolis.
Text: Giuseppe Nardi
Picture: Wikicommons
Trans: Tancred vekron99@hotmail.com
Katholisches....
AMGD