Do Jews and Muslims Decide the Conditions for the Recognition of the SSPX? 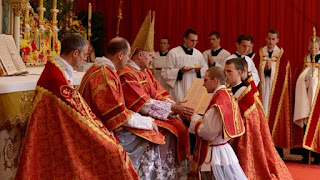 (Rome) The news platform Vatican Insider  has allowed the American Jewish Comittee (AJC) to say, "what is negotiable and what is not" on the way to "the Reconciliation of the Lefebvrians with the Catholic Church". The "conditions" are significantly different from those named by he who is in charge of the talks, Curial Archbishop Guido Pozzo.
The article, signed by Lisa Palmieri-Billig, the "representative of the American Jewish Comittee to the Holy See," was published on 28 July. The American Jewish Comittee and Islam representative, Yahya Pallavicini, explained the conditions under which the Catholic Church could recognize the Society of St. Pius X.
The ecumenical [diabolical?] intervention was provoked by an interview by Curia Archbishop Guido Pozzo included in Christ und Welt (issue 32/2016). Archbishop Pozzo is officially entrusted with the talks with the SSPX as secretary of the Pontifical Commission Ecclesia Dei.

If the Vatican will "sacrifice" Conciliar Documents for SSPX?

The author summarizes what is clear from the interview that the "Society is no longer excommunicated, but has not yet been reintegrated canonically, and despite some initial concessions, continues to reject some important documents of Vatican II."  This raises  "more questions", say Palmieri-Billig. The "obvious", but so far unasked questions are:

"On what specific points is the Vatican willing to compromise?" And "If the Vatican is prepared to sacrifice the authoritative nature of some documents of the Second Vatican Council, which - although not a dogma - have become valuable tools for Interreligious Dialogue"


Two key areas are in play. The first area concerns the "Pope Francis' very strong desire for pastoral unity within the church and for reconciliation of theological breakthroughs." This precludes the second region, namely "the important impact on the future of basic documents of the Second Vatican Council". Palmieri-Billig explicitly names the document Nostra Aetate , particularly "the relationship of the Catholic Church and the Jewish people", and Dignitatis Humanae on religious freedom.
The authors complained in the statements about  Archbishop Guido Pozzo's "complete absence of any reference" to the historical roots of these documents of Vatican II and "thus the reasons why  John XXIII., Paul VI. and the Council Fathers felt it was important." Specifically,  Palmieri-Billig referred to  "Paragraph 4 of Nostra Aetate on relations between the Catholic Church and the Jewish people". This "omission" was all the more serious because of the "seemingly entrenched theological anti-Semitism" of the SSPX.

The representative of the American Jewish Comittee  then insists that Nostra Aetate of John XXIII. was intended finally to "extinguish the distorted indoctrination" of the charges of "deicide", an accusation that "had already been declared false and absurd by  the Council of Trent." The "need for this decision" by John XXIII. was beause he had "become aware through an encounter with Jules Isaac, a survivor of the Holocaust" where Isaac had convinced the pope from the fact that "this rhetoric circulating in Europe had created a suitable environment for the development of wild anti-Semitic stereotypes, which in turn fueled the hatred that made ​​the Shoah possible."

Then the American Jewish Commitee comes to the point: If the SSPX can be canonically recognized "before" talks "about the validity" of Nostra Aetate found a "satisfactory solution", it "would create serious questions".
Palmieri-Billig  extensively cites Chief Rabbi David Rosen, the international director of the American Jewish Comittee for interreligious relations with the words:

"I have every confidence in the declaration of Cardinal Kurt Koch, President of the Pontifical Council for Promoting Christian Unity, who explained that the adoption of Nostra Aetate as a binding document by the SSPX, is a necessary step to ensure that the members of the Society may be formally recognized by the Holy See; and I can not believe that Pope Francis could accept less than that. In addition, I hope that the Holy See, regarding Judaism and the Jewish people, insists in the addition to recognition of the teaching of the Magisterium, on the denial of anti-Semitism that was part of the culture of the SSPX. It was not just about Bishop 'Williamson and a couple other people: The website of the organization has been full of anti-Jewish rhetoric in the past. I want to hope that there is a formal recognition of the statement of Pope Francis in line with his predecessors, which states that it is impossible to be a true Christian if you have anti-Semitic opinions." [David Rosen gets to decide who's Christian.]

The Crux: SSPX or Dominus Iesus ?

Palmieri-Billig shows themselves further concerned about the differing levels of dogmatic binding, which is applied to the various conciliar documents, as Archbishop Curia Pozzo explained in his interview. Pozzo appealed to the will of the Council Fathers on this issue. On November 18, 1964, the secretary for Christian Unity on Nostra Aetate explained that his secretariat had no intention of adopting dogmatic declarations about non-Christian religions but only practical and pastoral norms, which is why Nostra Aetate has no dogmatic commitment. It is therefore, says Archbishop Curia Pozzo, not possible to ask someone, to recognize this document as "binding."

The American Jewish Comittee representatives were also offended at the finding of Archbishop Pozzo, that any interpretation of Nostra Aetate, must include the Declaration Dominus Iesus , on the unicity and salvific universality of Jesus Christ and the Church 2000, which is "without foundation and should therefore be rejected." The Secretary of Ecclesia Dei warned explicitly in this context against a false  interpretation of the "Spirit of Assisi".
Palmieri-Billig represented the statements of Imam Yahya Pallavicini, vice-president of the Italian Islamic Religious Community (COREIS) to the contrary, who is considered to be the "internationally recognized representative of a temperate 'traditional Islam'." Pallavicini had in turn warned the Vatican:

"The international Islamic community follows closely the development of this convergence process of the SSPX for reintegration into the Catholic Church. It is about the sensitivity to find a coherence regarding the pastoral implications of the outcome of the Council and of the document Nostra Aetate. While Pope Francis and the Catholic Church, together with the spiritual authorities of many other religious denominations, celebrate the prophetic value of this Council that initiated the historical cycle of 50 intense years of inter-religious and ecumenical dialogue on providential way, the SSPX appears to downplay at least the  this path and this orientation  to maintain a traditionalist interpretation that actually denies the spiritual need of respect and fellowship with believers and other confessions believing in a God. In a moment of dramatic international crisis in which the manipulation of religion becomes a hostage of some fundamentalist groups, there seems to arise a claim of 'legitimate violence' against Muslims, Christians and Jews, concerns us and the anachronism and the lack of sensitivity of movements that the Society even wants to force the Church  or  to teach a different hierarchy of values, than   the Council and obedience to the saints and the popes."

"Vilification and delegitimization of the 'Aggiornamento'- John XXIII's Will."

Although the AJC representative noted that Society, representing 70 countrieswith 750Mass locations  in the "enormous Catholic world" has only a "relatively small influence" ... "but nothing that happens in this world without effect". Concessions to the SSPX "could easily" lead to a "return of the old prejudices" against other confessions and to "transform to the militant conviction of possessing the only true way to God".

That would be a further step towards the "insulting and delegitimization of the burning desire of John XXIII. according to the 'aggiornamento' of the Catholic Church and to return to the pseudo-religious, anti-Semitic stereotypes that  provoked immense suffering of many centuries and ultimately led to the diabolical persecutions and genocides of the 20th century. "
After the authors  thundered against SSPX , using the Antisemitism club, they praised "the deeply meaningful silence" of Pope Francis in Auschwitz as "deafening".
Director of Vatican Insider, the papal house vaticanist  Andrea Tornielli,  explains why his articles and products published by his platform are of particular attention. This also applies to this article by the AJC representatives to the Holy See, where Tornielli allows Jews and Muslims to designate the conditions about which the Holy See should conduct a canonical recognition of the SSPX. Vice versa this means: Should these conditions not be met, it would open up "serious questions". It's a statement in the article of the American Jewish Comittee that someone could read as a threat. Anyway,  Tornielli offered the American Jewish Comittee and the Islamic Religious Council the opportunity to be the warning sign for the Vatican.  It's an "unusual procedure", because they revolve "around internal Church matters" which are also to be clarified within the Church. It's an "interference" from the outside which must be "considerations rejected in principle" ipso facto, so Messa in Latino .
It is also dubious indeed that the American Jewish Comittee and the Islamic Religious Council  are pulling  together, to warn the Catholic Church of a "return" to their traditional claim that it was entrusted by Jesus Christ as the "only way to salvation."

Lisa Palmieri-Billig was born in Vienna. With her ​​Jewish family, she emigrated in 1938 as a small child to New York. During the Second Vatican Council, she worked in the Roman branch of the World Jewish Congress (WJC). She was 25 years, Deputy Chairman of the European section of the World Conference of Religions for Peace, based in New York, founded in 1961 and is today Chairman of the Italian section of this organization. Since 2005, she is the Jewish Vatican expert AJC representative  in Italy and the Holy See.
Yahya Pallavicini, born in 1965, is the Imam al-Wahid Mosque of Milan. His mother is Japanese, his father, Felice Pallavicini is from Milan, descendant of a branch of a famous Italian noble family [With strong Masonic connections, fighting against the Church in the 1860s], converted in 1951 at the age of 25 years in Lausanne to Islam. He prefers to speak of a "convergence" and "realignment". Since then, he calls himself Abd al-Wahid and has traveled 30 years in the Islamic world, where he was in Istanbul, Jerusalem and finally introduced in Singapore to Islamic Sufism. In 1980, he himself became a Sheikh (Master) and as such, head of the Sufi brotherhood, Ahamadiyyah Idrissiyyah Shadhiliyyah in Europe. Abd al-Wahid Pallavicini represents a syncretic religious view that all religions lead to "a god". In a chronological sequence have revealed this, the Hinduism, according to Pallavicini, the first link in this  chain of revelation that leads to  the three monotheistic "Abrahamic" religions, whose perfection is Islam.
In 1986 he took part in the  very controversial Assisi Meeting for Peace as the Islam representative, which was organized by the Community Sant'Egidi  with the participation of Pope John Paul II.. His son was counted among the 500 most influential Muslims in the world of 2009. In 1998 father and son negotiated as Islamic representatives for the recognition of the Islamic religious community by the Republic of Italy. In 2000 he created the organization called the Islamic Religious Community (COREIS). He is a member of the State Islamic Council of the Italian Ministry of Interior.
Both are part of the elite interreligious establishment.
Text: Giuseppe Nardi
Image: SSPX / ajc / coreis (screenshots)
Trans: Tancred vekron99@hotmail.com
Link to Katholisches....
AMDG
Posted by Tancred at 1:42 AM 49 comments: