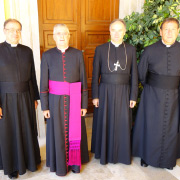 Vatican Logic:  Because he hasn't arrived to his most recent post, he will be promoted to Archbishop.

(kreuz.net, Vatican)  Today at noon, Pope Benedict XVI. named the present Secretary of the Papal Commission Ecclesia Dei, Prelate Guido Pozzo (60), to his Almoner and promoted him to Archbishop.

This was reported by the Vatican press service.

This appointment had been announced already at the end of September by Andrea Tornielli.

Msgr. Pozzo will be the successor of the Spanish Bishop de Blanco Prieto (75).

He was the "Almoner to His Holiness" for five years.

This unimportant office is directly under the Pope.  It is an abuse of the Sacrament of Holy Orders to ordain someone a Bishop for it.

Active in the Souvenir Business

The Papal Almoner cares for the Pope's charitable giving and distributes financial assistance.

He is a member of the Papal Household.  Its occupant has am inactive place in the Papal Liturgies of the Pope.

The position also draws income from the marketing of papal blessings on decorative paper. These can be purchased in the souvenir stores around the Vatican.

In the last years, Archbishop Pozzo has been a Vatican discussion partner for the negotiations with the Society of St. Pius X.

Posted by Tancred at 8:20 PM No comments: