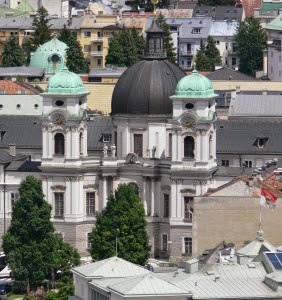 (Salzburg) on Sunday, 20 July, in the context of the Salzburg Festival, there is a  profanation of the famous Collegiate Church scheduled on the program.
One focus of the festival, the "Spiritual Ouverture" is in 2014 under the slogan "Christianity and Islam."  On Sunday, the appearance of the Sufi is to start at 9 O'clock of the Islamic Order of al-Gazoulia (al-Dschazuliya al-Husayniya al-Schadhiliya) from Cairo provided, who will perform  for the "his rites and ceremonies for the first time in a public space with us in the Collegiate Church,"  as the outgoing Festival Director Alexander Pereira thrilled to the Kleine Zeitung. "We are all incredibly excited" about the Sufi appearance. A Catholic church and the public space are obviously all the same for the Austrians Pereira. The "Ouverture Spiritual" is one of the inventions of director Pereira and is the prelude to the festival. After the 2012 Christianity and Buddhism in 2013, the focus in 2014 is on Islam.

Four Sufi Events WIth the  Slogan "Christianity and Islam" 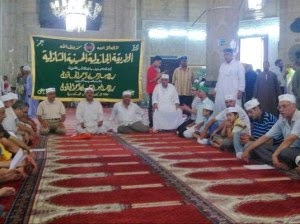 Sufis from Egypt, result in Salzburg Kollegienkirche "rituals and ceremonies"
In all the  four points of the  program will be focused upon the slogan "Christianity and Islam."  in the Collegiate Church.  July 24, will begin with Sufi chants 1 after which the Sufi chants 2 will follow.  On the 22nd and 26th of July, a Sufi choir sings lyrics from Sufi mystic Mansur al-Hallag (858-922), by a commission by the Festival of Hossam Mahmoud  and set to music by Samir Odeh-Tamim.
"Religion is like a river that flows through many countries. Each country gives this river a different name and claims this possibly also for itself. Here, the flow is independent of the countries and springs also from one source,"  it reads according to the performances on the website of the Salzburg Festival . Even the obligatory reference is not missing, that  the offer of "dialogue"  [Inevitably as it always does] follows.

Sufi Rituals "About Mohammed Connected to the Divine Source of Knowledge"

"At the heart of their teaching, love stands as the only way to God, whose name Allah is composed of four Arabic letters", insist the organizers of the festival in their announcement. And further: "Each of their rituals, as it rises in  silence, with the invocation of his name, rising in singing and with the gradually interjecting oriental musical instruments to a music that serves to connect with the Divine. These rituals are led by the Master (Sheikh) of the respective order (tariqa), where the Sheikh is connected by a chain of narration from the Prophet Muhammad with the divine source of knowledge. The rituals, of which not one is like the other, mostly take place at memorials of a late Sufi master. "

The Sufi Order has  "spontaneously declared themselves immediately prepared," the rituals for the "first time" in order to  carry them out in a "public space". For the festival management a Catholic Church is obviously indistinct from a "public space" like a concert hall or the Grosses Festspielhaus.
The Kollegienkirche of Salzburg, consecrated in 1707, is not only a historical monument and a UNESCO World Heritage Site, but is primarily and exclusively a Catholic church. As such, it was built by Prince Archbishop Johann Ernst von Thun-Hohenstein for the University  in 1622 and consecrated to the Holy Trinity. During the war the church was desecrated by Napoleonic troops and served the French occupation  as a stable and magazine. After the university was abolished in 1810 by Bavaria and re-consecrated under Austria, it found a new job as a garrison church. Since 1922,  it has been used as the venue for the Salzburg Festival.
With the re-establishment of the University in 1962, the Collegiate Church was again a University Church and in 2008 made a parish a personal parish established for the University. The baroque church, built by Johann Bernhard Fischer von Erlach is considered, next to the cathedral, as one of the most important churches of Salzburg.
The Collegiate Church is the seat of the University Church Catholic Student Community. Recent renovation work completed after the orphaning of the high altar, being displaced,  and the establishment of a "people's altar"" in the nave underlined  the final loss of the importance of the presbytery. The new "community" gathers in a circle around the altar, while the presbytery, was reduced to a meaningless relic of past times in the church building.
The Catholic Church categorically rejects the   use of a church for the rites of other religions. Their enactment leads to the desecration of the church and requires its own rite of purification in order to be used  again for the Catholic liturgy.
Text: Giuseppe Nardi
Image: Muslim in Egypt
Trans: Tancred vekon99@hotmail.com
Link to Katholisches...
AMGD