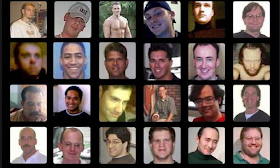 Edit: Josh Guimond disappeared 20 years ago on November 10th at Saint John’s Abbey. Despite the unusually large number  of sexual degenerates and criminal sodomites currently and then located at Saint John’s Abbey, the local authorities are directing their expert attention away from the Minnesota Abbey. Considering past bungling by Sterns County, it’s hard to understand why they are so highly esteemed by the media.

The national press has deigned to cover the story now that the Sterns County Sheriff’s Department has released a lead. They’ve  provided a photo collage of young to middle-aged males who might know who Josh was. (None appear to be related to the Modernist Abbey)

The context of the photos is unclear, but it is now more than apparent that Josh was active on gay dating apps, according to the Podcast by civil rights attorney Josh Newell.

There are no photos in this collage of Dan Ward, the credibly accused sex predator Coach of Josh Guimond’s debate team, but it would be  pointless perhaps to seek questioning  of the violently deceased Bruce Wolmering, who was active as a floor monitor in a dorm nearby. Wolmering was adept at hypnotism and employed it in his practice.

This fine piece of work probably knows more than a list of randoms Josh was looking  at on gay dating sites that the Abbey’s Sheriff’s Department is presenting. Andert  used hypnosis as a parlor trick with students in the dormitory at St John’s. He most likely abused a prominent politician’s very troubled son.

These sickos and many others, roam the countryside and have often been given positions of trust by Abbot Klassen who is supposedly not aberrosexual.

You can’t make this up. A lot of the Monks, including  the Novice Master, I’m told, aren’t into Latin, but they are really into Latinos. This poor kid better run! Watch out Pedro!

We don’t know if Sterns County has perused Jerome Tupa’s pornographic “art”.   When we first saw it years ago, it just looks like weird abstraction. Eventually, it became obvious. One can not unsee, having  seen Tupa’s sadomasochistic and very gold plated, drawings. One friend of Tupa’s referred to him as, “the man with the golden junks.”  One of the few places a person can view this crap is on Eponymousflower, which has tried to highlight the evil and degeneracy of Collegeville for over a decade.