The young priest Charles Murr with Pope Paul VI.  Murr is convinced that Pope John Paul I was murdered on behalf of the 33rd degree of Freemasonry.

(Rome) On September 4th, yesterday, Pope John Paul I, who reigned for only 33 days in 1978, was beatified.  This canonization, carried out personally by Pope Francis on St. Peter's Square, is greeted with a sniff in some circles.  There is a suspicion that the Second Vatican Council is to be canonized.  With John Paul I, the last Pope of the Council was canonized, after John XXIII, Paul VI.  and John Paul II have already been raised to the altars.  There is another reason why there is some mistrust yesterday's beatification.  They fear that this will wipe the question of the cause of death off the table once and for all.

Cardinal Albino Luciani, then Patriarch of Venice, succeeded Paul VI had been elected Pope on August 26, 1978.  Just 33 days later, the Church was startled by the news of his sudden death.  Whoever dies young has “a great funeral” as the saying goes.  A certain transfiguration often follows.  A sudden and unexpected death fuels speculation.  These were also present after the death of John Paul I.  They were nourished above all by the book "In Gods Name" presented in 1984 by the British journalist and screenwriter David Yallop.  In it, Yallop argues that John Paul I was poisoned because he wanted to clean up the machinations between the Vatican Bank and the Italian Masonic lodge Propaganda Due (P2).  Apart from a lot of speculation, allusions and insinuations, however, Yallop failed to provide proof.  A large number of books have been published on the Loge P2 by Licio Gelli.  Yallop linked mysterious events together, creating a kind of super-puzzle that contained all the elements of an intriguingly chilling story.  The book became a bestseller without contributing to the establishment of the truth.

In opposition to this, the book “Murder in the 33rd Degree” (The Gagnon investigation into Freemasonry in the Vatican”), appeared at the beginning of 2022, which the American priest Charles Theodore Murr-Létourneau presented. The 33rd degree is the highest Masonic degree of the higher degree systems, the most famous of which is the Scottish Rite.  The Freemasons who are initiated into the 33rd degree form their own council among themselves, country by country.

The Masonic hand grasps that of the Pope.

Charles Murr of St. Paul, Minnesota, ordained a priest of the Archdiocese of New York in 1977, had studied at the Angelicum (Pontifical University of St. Thomas Aquinas) and at the Pontifical Gregorian University in Rome, but also at the University of Salzburg to expand his knowledge  in psychology and to learn the German language.  In Rome he worked first for Cardinal Pericle Felici, then from 1974 for Cardinal Edouard Gagnon.  It was Cardinal Felici (1911–1982) who, as protodeacon, announced the election of Pope John Paul I to the world in 1978.  The Prefect of the Supreme Court of the Apostolic Signatura, he was the supreme judge of the Church (after the Pope) and one of the few cardinals who continued to celebrate in the traditional Rite after the liturgical reform.  He died in office at the age of 70.

The Franco-Canadian Sulpician Edouard Gagnon (1918-2007) had been called to Rome as Peritus during the last two sessions of the Second Vatican Council.  There he remained and was assigned various tasks by the popes.  In 1983, Pope John Paul II appointed him first President of the newly established Pontifical Council for the Family.  As such, he defended the encyclical Humanae Vitae against opposition to the ban on artificial contraceptives.  Until his death, he remained a staunch defender of the Church's doctrine of marriage against attempts to introduce "gay marriage" in Canada.

In 1985, John Paul II made the then titular archbishop a cardinal.  In 1987 Gagnon received from this pope the special order of a visitation of the Society of St. Pius X (FSSPX), for which the Canadian cardinal had sympathies.  However, his mission failed in 1988 because of the episcopal ordinations carried out without the permission of the Pope. 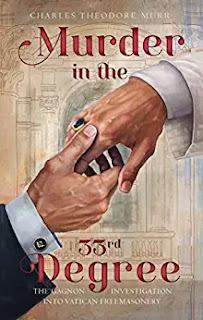 In the 1970s, however, Gagnon had carried out another special assignment that is still little known for Paul VI. when he commissioned him with a visitation of the Roman Curia - a particularly delicate mission.  This is all the more true when you know the exact assignment: Archbishop Gagnon was to find out how many Freemasons there were in the Curia.  The young Charles Murr was his assistant.

The visitation lasted three years, from 1975 to 1978, since Archbishop Gagnon encountered "great difficulties", till he could submit his report to Paul VI.  In the foreword to his book, Murr writes: The only way to find out how many Freemasons Gagnon found in the Curia during his investigation is to publish his report.  44 years have passed since it was handed over to the Pope.  The report is under lock and key and had no immediate consequences since Paul VI.  died that same year.  The same fate befell his successor John Paul I.

In his book "Murder in the 33rd Degree", Charles Murr contradicts the heart attack thesis as the official cause of John Paul I's death. But with the beatification, the topic seems to be off the table once and for all: Papa Luciani died of a heart attack, his heroic virtue proven, he interceded for a miracle, is now beatified and will rise among the saints in the future.  All are happy.

Cardinal Gagnon, as Murr documents, was convinced that John Paul I was murdered.  There are "many ways to kill a person," the Canadian had said to his former assistant when he asked him about the cause of death.  His superior at the time left no doubt that the specific case involved murder.  As always, it is important to exercise the necessary restraint towards such theses, but the book is much more relevant than that of David Yallop.  In any case, this applies to the development within the Church that led to today's crisis. 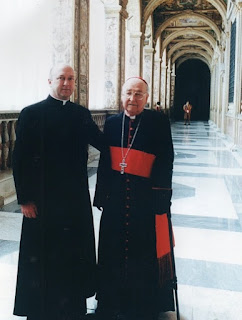 ABC, Spain's leading conservative daily newspaper, published on September 30, 1978 the Holy See's official statement on the cause of death of Pope John Paul I. It presented that it would be impossible to establish without an autopsy.  The official version of Luciani's death was doubted from day one.

Charles Murr writes in his book that the last churchman who saw John Paul I alive was a cardinal whom the pope wanted to remove from office because of his lodge membership.  Just hours after a heated encounter with the cardinal at the apostolic palace, the pope was found dead.

The fact is that Curial Archbishop Annibale Bugnini, the master builder [Dare we say, Grand Architect?]  of the liturgical reform, and Cardinal Sebastiano Baggio, Prefect of the Roman Congregation for Bishops, who were the focus of the special investigations of Archbishop Gagnon and his assistant Charles Murr.  The initiative to introduce an age limit for bishops in order to be able to install a new generation of progressive bishops worldwide went back to Baggio.  According to Murr, the membership of the two churchmen is certain.  While Bugnini was still exiled to Tehran by Paul VI., while the higher-ranking Baggio was still able to stay in Rome.  His removal was the subject of Archbishop Gagnon's first meeting with the newly elected John Paul II on September 25, 1978.  That was three days before he died.

But the question of the cause of death seems to have been wiped off the table with the beatification.

Luciani died of Black Fox Swamp Fever. The secretive Vatican doesn't allow autopsies for Popes so the evidence was lost.

They could do DNA testing on his remains and could solve the mystery.

Ha!
Doubt that the Vatican would allow a Forensic analysis of his remains to be done.
Never heard that they cracked open the tomb to see if he was incorrupt.

Murr's book is interesting, but contains its flaws. For one: he thinks +Benelli was a "good guy" conservative. Kinda hard to reconcile him being in the know with that kind of mistake.

I would suspect Bergo of being a Freemason, but I doubt he was smart enough to even pass the entrance test to get through the front door!

Funny, but Bergoglio isn’t stupid.
Wish he were.

You are right. Bergoglio is not stupid.
He got his mitts on the Knights of Malta treasure trove.

God grant us a good Pope soon who will restore sanity to the Holy Mass & forbid these sacraligious modrn Masses (?)

Jim Hoffnung said...
This comment has been removed by a blog administrator.
September 9, 2022 at 4:29 PM

The ambiguity was a creation of the Cabal with Suennens and the rest. They said so themselves.

"Why would Fr.Murr not demand Cardinal Gagnon conditionally Ordain him and reject Bugnini's doubtful "New Rite?"

Ans why should you care at all about anything Catholic, Andrea, when you are sede-vacantist and extra ecclesiam?