Edit: although various Jewish organizations openly attack the Catholic Church and sometimes even say it should be shut down, maybe it’s time to shut something else down, considering that child abuse by Rabbis is so widespread it could be called an epidemic.

Why don’t all those alleged Catholic gatekeepers like Taylor Marshall, Thug Gordon, Marcy Shea, Eve Tushnet, Dawn Eden, Simcha Fischer, Holy Soy Skojack, Gary Voris, Budgie, Dale Alquist and Sciambra among a host of others, say absolutely nothing about  these vermin who openly commit these crimes, often with impunity?

The person talking to his wife about shutting down the Catholic Church is Ethan Klein. 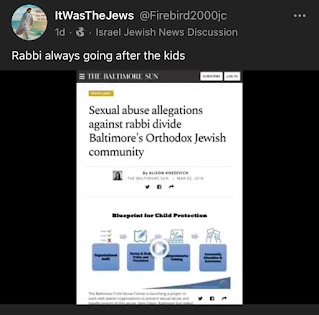 It's 'Steve' Skojak (*just threw up a little in my mouth*)

Public school teachers commit crimes like this at even higher rates than rabbis, but you're not allowed to sue the school and the Statute of Limitation in place is always respected.

This does not mean we aren't suffering because we permitted so many homosexuals to be ordained.

Am I shocked at the Tribal degeneracy?
Nope.

Veron:
You've crossed a line with this post. Your blog isn't long for this world. I suggest you take it down before certain people see it.

Oh, David!
You again?
You were going to close the blog down a few months ago. What happened?
Still waiting for "certain people" to see it?

It's not hard to do. Just link it to those "certain people".

Is this the same guy who made all the threats about the Moon post? Honestly though, I think this one is more incendiary.

Oy, veh! The goyim want justice for rabbis raping children! We must shut it down!

If a DA were to go after a rabbi, he would find the entire tribe conspiring to make his life a living hell, from the Reformed atheists to the levitating Lubavitchers.
As for suing the perps, there’s no Jewish equivalent of the diocese or religious order.

Throw the Jew in the well.

It’s DOWN the well, you spas.

"It’s DOWN the well, you spas.

Obviously the Pogrom boy has personal experience in these things.