Edit: Steve Skojec has a problem believing in an eternal Hell for the wicked…but it’s for people like Steve and Karl that make it so believable.
We’ve seen a lot of these internet apologists who come on the scene from Protestant backgrounds. One of the most successful has been Karl Keating, whose prolific Catholic Answers offered a watered down milquetoast version of Catholicism that was supposed to avoid offending public opinion. He hated Angelqueen, which was totally free and Catholic, unlike his own commerce website, so much. His childish attacks on Feeneyism are particularly pathetic. Could he be the Glenn Beck of Catholicism?

He was always so worried about what the Lutheran and Presbyterian neighbors would think. But that didn’t stop him from engaging in the usual smarmy Neocatholic behavior by doxxing a former friend who lightly ridiculed him on Angelqueen.

Keating has routinely attacked traditionalists for decades, whether he’s arguing for the superiority of the evil King James Version of the Bible over the Douay-Rheims, or trying to gatekeep what types of traditionalists he approves. Apparently, he never really liked Catholicism, but saw a business opportunity in attacking it from within. As ever, like many other professional Catholics, he got some real straw dummies set up to represent the traditionalists who were the classic bad guys. But it was pure projection.

Now that Karl has retired, he can appear on people’s Facebook pages to gatekeep the miracles and apparitions they believe in. Karl thinks the miraculous staircase of Loretto  isn’t a real miracle and to believe in it is credulity.   Here’s Karl attacking someone’s “credulity” on Facebook, but what’s credulous are Karl’s paypigs who’ve been paying this smug popinjay to deceive them.

Karl doesn’t believe in miracles. He’s a skeptical Protestant who doesn’t think these will fit in his Catholic business plan. 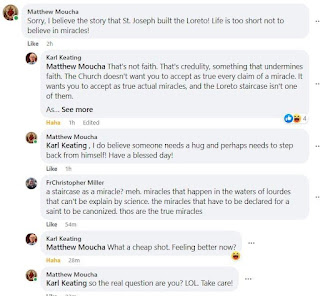 Keating is not a convert and he's more concerned with offending his Japanese inlaws than any Presbyterians. He does not put soy sauce on rice.

I’ve always thought he was a member of some WASP county club religion.

Curiously he attends FSSP in San Diego. I have to check what he wrote on Angel Queen

Back before the Universal Inbult, Keating was hostile and dismissive to the TLM crowd.

Pretty sure the ADL and DOJ is pleased with the snarky condemnations of socalled "radical" trads by Angelqueen and Eponymous Flower. Catholic Answers is another clown show of Americanism pretending to be Catholic.

Keating is the one making snarky comments against “radical” trads, dummy, not us.

Keating's Catholicism & Fundamentalism brought me back into the Catholic Church in 1997. That is just a fact. I haven't kept current with his writings, and I know nothing of his stance on TLM, which I attend. I am grateful that he wrote this book. I do not defend any of his other writings or stances because I do not know them. I do, however, caution against ad hominem, much in evidence here.

"A church that does not develop its thinking in an ecclesial way is a church that goes backward. That is the problem of many today who claim to be traditionalists. They are not traditionalists, they are 'backwardists.' Tradition is the root of inspiration in order to go forward in the church."
- Pope Francis in Quebec, July 2022.

What does this quote have to do with Keating? We know Bergoglio is doing the work of satan. Perhaps he will next say adultery is the proper starting point to prove fidelity.

As cuckservatives burn with unquenchable lust for mainstream respectability, so it is with CatholiCucks like Keating.

Dear Janie, rather than trying to Janie and sweep up for cucky Keating,
why not respond to Keating’s arrogance in evidence here and gatekeeping for Jewish power?

Allan Hoban, aka Gaybrielle, go away.

What kind of website is this? These comments are not rational. I guess at age 70 I am too old for such "discourse."

What’s not rational or sincere is your “concern”.

At this point, I assume you don’t have a response to Keating’s arrogance and acting as a gatekeeper for Jewish power.

The readership is about 65, fwi.

1)I don't have a response for Keating's alleged "arrogance and acting as a gatekeeper for Jewish power." I don't know what this means, as I have said before I know nothing but his book that I read in 1997.

2)"rather than trying to Janie and sweep up for cucky Keating,
why not respond to Keating’s arrogance in evidence here and gatekeeping for Jewish power?"
What does "cucky" mean? How can I respond to his arrogance when I know nothing but the one book I mentioned?

3)"As cuckservatives burn with unquenchable lust for mainstream respectability, so it is with CatholiCucks like Keating." I don't know the definition of "cuck" as an attachment to a word. How on earth is one to make sense of such comments?

4)And the quote by Allan Hoban of Bergoglio, that has nothing to do with the discussion.

I feel like I have entered a madhouse. Get me out of here! I will share this with Frank Walker.

Search for the following essay on the great Vdare site:

Cuckservatism: The Cuckoo in the Conservative Movement’s Nest

Read. Then make necessary adjustments to apply to CatholiCucks.

No. I don't need to read this. I am a long time fighter for orthodoxy in my modernist diocese. I am the prolife leader. I love the Catholic Faith will all my heart.

I am also a many year English teacher at a Catholic high school where I taught English Literature, American Literature, and AP Writing. The level of discourse on this site is very low. I am no genius, but I know enough to steer clear in the future.

So what? You made some claims, said you were ignorant of my concerns about Karl and proceeded to attack the messengers.

Neither of those two cranks wrote here.

John Cunningham said...
This comment has been removed by a blog administrator.
August 4, 2022 at 3:06 AM

Of course, you will be back. You cannot resist.
And even if you didn't, do you think that we will roll up in a ball and die?
Hardly.

Go blather to your students who can't get away from you.

Janney wanted to Jannie the forum.

Nothing excites white ethnomasochist Boomers more than the prospect of themselves and their children being eternally and publicly gang-raped by Paco, Jamal, Abdul, Wong, and Shekelstein as the ultimate form of virtue-signaling. Pitiful. Just plain pitiful.

Fonzy Cunningham aka Gaybrielle and a legion of other entities said...


Janney, old chap, I'm 76 and know a thing or two about what matters the most but the good eggs at EF are attempting to jolt my personal mutual admiration society out of its ingrained ignorance, bigotry and collective self-loathing is practically impossible. The smoke screen is a form of Catholicism that exists only in the minds of my alterpersonae and the 'Tradition' that I cant understand or explain. As our social, economic, political, racial worlds collapse around us and we lack the resilience and intelligence to adapt and grow. We are consumed, in stead, with that most toxic soul destroying disease called, not resentment, but Rissentiment, the hankering of the slave to exploit and oppress others even more effectively than our masters. We don't even know just how alienated we are from Catholic Church and how far we have drifted from Christ and his Gospel. Poor me~


He may have commented, but he’s never been a blog member.

I don't remember Armstrong here, but he's pretty forgettable. Keating was definitely here along with Marc Shea and Hillary White.

I never got along with Hilary, and she only came here to complain about tone and trivialities. She was never a blogger here, just a commenter.

Keating may have come here to complain about “uncharitably” of “rad trads” but probably not under his own name.

I’ve never felt that Keating was ever truly interested in expositing Catholicism. He’s about gatekeeping for the Tribe and Crusading for upper middle class respectability. How boring!

Dave Armstrong actually blogged a few times and even cited EF in one of his books!