Brandmüller misses the lack of exchange of arguments in consistories 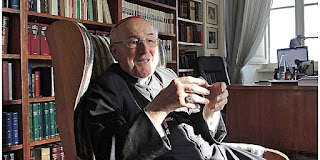 Rome (kath.net/KAP) The retired German Curial Cardinal Walter Brandmüller was critical of the recent Cardinal Assembly in Rome.  The consistories in their current form are an "obviously completely useless procedure," he wrote in an article published by Vatican journalist Sandro Magister (Wednesday).  Brandmüller wanted to express the criticism during the consultations with the Pope in the past few days, but he was forbidden to do so, it said.

While there used to be open discussion on such occasions, there has been a "strange silence" at the cardinal meetings for years, says Brandmüller.  "There was never a debate, an exchange of arguments on any particular subject."  Suggested changes on his part were rejected.  "In short: For at least eight years, the consistories have ended without any form of dialogue," the 93-year-old summed up.

If the Cardinals have anything to say...well facta, non verba.

Rather than complain about Bergoglio, perhaps Cardinal Brandmüller ought to do something about it.

True. But Cardinal Brandmüller has likely considered the question what else does Francis want. For these his ultimate aims are far more serious than silencing the cardinals. What are they?

Francis the False first and foremost wants to destroy Holy Mother Church. His secondary goal of this project, is that he wants to lead all souls into Hell (which doesn't really exist at all, according to Bergoglio, as you will remember his comments to his dear departed friend Scalfari). His tertiary goal, perfectly in line with the evil of his first and second aims, is to create a Hell on earth, as his embrace of Pachamama/Stang, and the NWO, WEF and UN goals; his bloody destruction of the Church in China (for 2 billion per annum from the CCP) and the bloody havoc wrought by his support for his "loving" covid-19 injections (for billions per annum from Pfizer); and his Church lockdown and shutdown in Easter of 2020 all prove.

If Cardinal Brandmüller can perceive these Bergoglian goals, he should seek to topple Francis the False. Whom many of us consider an antipope. (Not to worry the church has weathered some 39 anti-popes throughout Her history, albeit none posing quite the problem as #40, Jorge Mario Bergoglio.)

Cardinal Brandmüller can do so as follows.

“Significant canonical irregularities have been identified with regards to the putative resignation proffered by Pope Benedict XVI in February of 2013. Pending further investigation, I hereby declare a State of Emergency and State of Exception in Holy Mother Church.”

He could also point out that Pope Benedict has himself already likely declared a State of Exception (see Carl Schmitt, Gänswein et al.).

Fight the evil, and trust in the Immaculate Heart.

These interviews including those of cardinal Burke are useless - indeed the church is pretty useless, really.

God bless the Cardinal...but really, is this news? the faithful laity have moved w.a.a.a.y past this milktoast interview

Let's see if Dubia Brother Brandmüller has the knackers to cash in his silly red biretta and the generous pension that goes with it.

Anonymous 120pm. If the Church is useless, what are you going to do, B’hai?

I'll pay attention when one of these Novus Ordo windbags condemn feminism.
-Andrew

"I'll pay attention when one of these Novus Ordo windbags condemn feminism."
And I'll consider taking you seriously when you become a Christian, Andrea.