Scalfari, The Bard of the Bergoglian Double-Magisterium Has Died

Eugenio the friend of the pope, or: The pope who had a freemason and atheist as a friend and did not convert him.

(Rome) Eugenio Scalfari, the atheist friend of Pope Francis, died yesterday. The newspaper La Repubblica published an obituary by Pope Francis today about the founder of this newspaper. The relationship between Pope Francis and Masonic atheist Eugenio Scalfari is among the most telling and enigmatic pages of the current pontificate. It is significant and puzzling, if not surprising, that the obituary is a eulogy.

Eugenio Scalfari, born in 1924, was a journalist and publicist all of his professional life, he came from an upper-class family with a long Masonic tradition, earned his first spurs in fascist daily newspapers and was a co-founder of the radical-liberal, anti-clerical Radical Party in 1955, 1962-1968 editor-in-chief of the weekly magazine Espresso (comparable to the German Spiegel), as an independent member of parliament for the Socialists till 1972, in 1976 he founded the daily newspaper La Repubblica to the left of the upper-class liberal Corriere della Sera, of which he was editor-in-chief until 1996 and then its publisher. His self-description was, an atheist. Although he never described himself as a Freemason, he was happy to show the ancestral gallery of his direct ancestors, who were brothers in the lodge.

The editors chose the following words as the headline for the papal obituary:

"Eugenio, my laicist [secularist] friend, I will m[iss talking to you."

Since the 1950s, Scalfari himself has been involved in every socio-political struggle intended to lead the world a little further to the left. In addition to the political right, the main targets of his media activism were the indissolubility of marriage, the inviolability of human life and again and again the Catholic Church and its dogmas. He was successful as an extra-parliamentary spokesman in many struggles: in the 1970s, divorce and abortion were legalized, as were “gay marriage” and euthanasia a few years ago.

It was all the more striking that Pope Francis found his most enthusiastic fans, one cannot call it any other way, in the ranks of the anti-Church Radical Party, that radical liberal micro-party which, as a hinge between the Marxist left and left-liberal bourgeoisie, exerted great influence on political developments in Italy and beyond. The bandwidth of these fans ranged from Marco Pannella to Emma Bonino ( after all, former Foreign Minister, EU Commissioner and Soros Prize winner and for Pope Francis a "very big one") to the now deceased Eugenio Scalfari.

All of them came from well-to-do bourgeois families, were open to Socialism, but never joined communism, but internalized the emancipatory drive of liberalism, which still predates socialism, which is why they were able to become leading exponents of the political left in numerous struggles. Their fight was for the legalization of divorce, abortion, euthanasia, drugs and "gay rights". As a powerful doyen of Italian left-wing journalism, Eugenio Scalfari led this struggle from the columns of the daily newspaper he had founded.

Marco Pannella, the "Mangiapreti" (priest-eater), another of Scalfari's friends, became an "electrified" fan of Francis. Pannella, who died in 2016, still had under Pope Benedict XVI. demonstrated against the Church on St. Peter's Square with the slogan "No Taliban, No Vatican" and put the Vatican on the same level as the Islamist Taliban. Under Pope Francis, the same Pannella exclaimed, unforgettably:

"Viva il papa! We radicals love him very much”, so much so that Pannella wished: “I want to become a citizen of the Vatican”.

Pannella and Scalfari were two leading founders of the Radical Party.

How could such adamant abortion lobbyists see Francis as a "friend"? Were they even deceived by the Pope, as some of their supporters suspected? Nothing like that.

Bergoglio made it clear at the beginning of his pontificate that the struggle for "non-negotiable values" is not his struggle. Rather, he made a serious break and described the attitude of his predecessors in the question of the right to life as "obsessed". Francis did not formally change the Magisterium in a very Bergoglian way, but in fact he did, entirely in accordance with the principle he advocated that practice comes before theory. For Scalfari and Pannella, this counted for far more than an occasional but inconsequential criticism of the killing of unborn children. Francis' recent stabs in the back at the majority of US bishops on the communion issue for abortion politicians reinforced this papal maxim.

In this way, Francis was able to establish an unofficial, parallel teaching post , the bard of which was his friend Eugenio Scalfari. This "new magisterium", also known as the " Scalfari magisterium" and never really denied by the Holy See, promulgated a new doctrine more like that of the Lodge than the Church. In 2019, all the conversations, interviews and phone calls that Scalfari subsequently reported to the world were collected in the book I l Dio unico e la società moderna' ('One God and Modern Society'). It contains all the statements of the reigning pope that caused considerable irritation in the church in the past and will probably do so in the future. Scalfari always insisted on their authenticity - unchallenged. Scalfari clarified a bridging in the subtitle of the book, because the publication included all "meetings with Pope Francis and Cardinal Carlo Maria Martini". The latter had already died in 2012, not without Benedict XVI two months before his death. vigorously urged to resign.

“Eugenio Scalfari is twelve years older than the Catholic Church leader. How can their relationship, which is obviously deliberately surrounded by an aura of the unclear and opaque, be described? Most likely as congenial, since a certain kinship of spirit can hardly be denied after six years of irregular 'collaboration', which has continued despite all the criticism."

Tenets of the Bergoglian Scalfari Magisterium are:

The atheist Scalfari wanted to "build a tailor-made, fluid and relativistic Christianity", according to Il Giornale at the end  of 2013. And Francis supported him in this.

The Vatican spokesman at the time, Fr. Federico Lombardi, objected embarrassed and half-heartedly, but soon realized that Santa Marta had not issued any order for a denial. So the statements remained unexplained in the room. It was obviously intentional. Even more: The Vatican publishing house even published the first and most irritating interview in book form . It probably doesn't need any more confirmation. 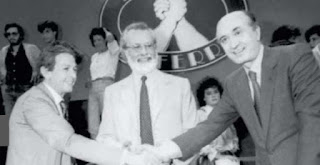 “Scalfari, who has long since given up the editorship, has retained his weight and his column. Some, including Catholics, lulled by accusations of spreading conspiracy theories, don't like to hear it, but it's important for Scalfari: he's proud of his Masonic heritage. Although he is silent about his own affiliation with a lodge, he likes to point out that his grandfather and his great-grandfather and his great-great... were brothers and founders of the lodge. 'My ancestors founded lodges all over the Catanzaro area', Scalfari himself quotes in the book as a Masonic friend who said of his grandfather, a 'staunch socialist', that he was 'like an old Lucifer who catches fire'. Similar allusions abound throughout this book, while he suggests, more clearly than before, that he entered the lodge in San Remo immediately after the war. He does this, not without pointing out that in 1874 the Lodge in San RemoLiguria , predecessor of the lodges that work there today, and published the newspaper Lucifero ( Lucifer ). For the brothers in the lodge, Lucifer is not the personified evil of Christianity, but the 'bringer of light' who is worshiped in lodges and whose knowledge is striven for.”

Having said that, we publish Pope Francis' obituary of his friend Eugenio Scalfari:

"Eugenio, my lay friend, I will miss talking to you"

I am saddened by the death of Eugenio Scalfari, founder of La Repubblica newspaper. In these painful

hours, I am close to his family, loved ones and all those who knew and worked with him. He has been a loyal friend to me. I remember him telling me at our meetings at Casa Santa Marta how he was trying to grasp the meaning of existence and life, exploring everyday life and the future through meditation on his experiences and his great readings. He described himself as a non-believer, although in the years I've known him, I've also thought deeply about the meaning of faith. He always wondered about the presence of God, about the last things and about the life after this life.

Our conversations were pleasant and intense, the minutes with him flew by, punctuated by the cheerful confrontation of our respective opinions and the exchange of our thoughts and ideas, but also by moments of joy.

We talked about faith and worldliness, about everyday life and the great horizons of humanity in the present and future, and about the darkness that can envelop man and the divine light that can illuminate his path. I remember him as a man of extraordinary intelligence and an ability to listen, always searching for the ultimate meaning of events, and always eager for knowledge and testimonies that might enrich the understanding of modernity.

Eugenio was an intellectual open to the present, courageous, transparent in describing his fears, never nostalgic for the glorious past but looking forward, with a touch of disillusionment but also with high hopes for a better world. And he was excited and in love with his work as a journalist. He left an indelible mark on the lives of many and charted a career path that many of his collaborators and successors have followed.

At the beginning of our exchanges by letter and telephone, and during our initial conversations, he had expressed his astonishment at my decision to call me Francis and wanted to understand the reasons for my decision. And then he was very fascinated by my work as a chaplain of the universal church, and in this sense, he argued aloud and in his articles about the church's commitment to interreligious and ecumenical dialogue, about the mystery of the Lord, about God, source of peace and Source of paths of concrete brotherhood between individuals, nations and peoples.

He emphasized the crucial value - for our society and for politics - of sincere, fruitful and continuous relations between believers and non-believers. He was fascinated by various theological issues, such as mysticism in the Catholic religion and the passage in Genesis that states that man was created in the image and likeness of God. And the composition and characteristics of the population groups that will inhabit the common house in the coming decades.

From this day on, I will keep in my heart the kind and precious memory of the conversations I had with Eugene during those years of my pontificate. I pray for him and for the consolation of those who mourn him.

And I commend his soul to God for eternity.

But, wait a minute.
He did not believe in a God that his soul would be commended to.
I'm confused.

“ And the composition and characteristics of the population groups that will inhabit the common house in the coming decades.”

What a sleuth you are!
He died from being 98 years old, you pinhead.

Like Trump's limit of 198 on Twitter, your ideological cosmos consists of two or three tired, borrowed and baseless slogans.

Was Scalfari's heart open to the Truth?

His deceit and collaboration with Bergoglio points to doubtful.