Catholic doctor and family man Alban Gervaise was buried on June 7 after an Islamist stabbed him in front of his children's school.

Islamic Violence is part of daily life in France

(Paris) A magazine denounced the "epidemic of stabbings" sweeping France without the media taking any notice.  The “new normal” is migration-related violence.  However, “political correctness” prohibits reporting and speaking about it.  Anyone who does it will be pilloried.  Along with the “stabbing epidemic” comes an epidemic of political hypocrisy.  The latter made the former possible.  The post-war construct called "Western Europe" is stuck in a vicious circle from which it apparently does not know how to free itself.

In its current issue, the monthly magazine Causeur laments the great fear of “insulting Muslims” when denouncing jihadism and jihadists.  This fear is not a natural phenomenon, but a screw clamp in the head that is attached by ideologues.

"Silence, on égorge" is the shocking headline.  Causeur wants to break the media silence that envelops Islamist attacks as if with anesthesia so that he does not have to face the reality of radical Islam.

It's about "prioritizing".  The alliance of left-liberal establishment and left-wing infantry that followed the collapse of the Iron Curtain in Western Europe is also pursuing its goals at the price of endangering internal security and social peace in the European states.  The migration, climate, corona and sanctions policies show it. 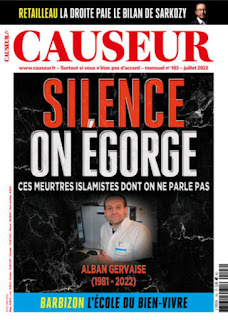 Front page of the current issue of Causeur

Causeur's editor, Élisabeth Lévy, recalls the tragedy of the Catholic doctor and family man who, just 40 years old, was killed "in the name of Allah" in front of his children's school last May and forgotten by "dedicated" columnists.  The death of Alban Gervaise, which occurred in hospital after weeks of agony, is one of the "unspoken Islamist killings," Causeur said.

"Alban Gervaise has died twice: his throat slashed by his killer's knife and buried by his country's silence."

"If we have decided to dedicate the cover to him, it is because we want to right an injustice, but also because his death occurred at the crossroads of two French tragedies: the first is the war that has declared us invisible enemies  ;  the second is the startling denial of the first,” says Élisabeth Lévy.

Islamist terrorism swept to Europe in 2004, when bombings killed 192 people in Madrid, leading to the fall of the conservative government.  In Europe, it is a phenomenon that cannot be classified in the previously known theories of terrorism.  References to Islamist terrorist organizations such as al-Qaeda and the Islamic State (IS) were misleading from the start.  The Islamic State (IS), as it became known in the media for its military operations in the Middle East, was a product of the Obama administration and some Middle Eastern potentates.  It was eliminated because Donald Trump ended US support after his election and Putin's Russian forces defeated it militarily.

Some of the perpetrators operating in Europe may have taken their cues from the terrorist groups mentioned, but a direct connection could not be proven.  It was the phenomenon of “lone wolves”.  Islam's inherent willingness to use violence called jihad made it possible.  This willingness to use violence, which nobody recognized and described more accurately than G. K. Chesterton at the beginning of the 20th century, also produces the Islamist everyday violence that has afflicted Western Europe for several years.  This brutal everyday violence had never existed in Europe before.  Their return is a direct product of unrestrained mass immigration, which in turn is the ideological product of that alliance.  The cities are becoming less safe, the streets more and more dangerous.  Women in particular pay the price.  But you hardly talk about it anymore, because you are not allowed to talk about it anymore.  The Corona muzzle is the defining symbol of this mental and moral distortion of public discourse.  It is not the migration-related violence that causes public unrest, but those who draw attention to it, claim the deniers of reality and impose bans on speaking.

The slitting of the throat while shouting "Allahu Akbar" is no longer a headline in France, at best a small notice.  The writer and journalist Éric Zemmour tried to rebel and ran for president.  With this he caused quite a stir.  In polls, he immediately reached third place.  At the polls, however, he only received seven percent.  They symbolize the successful containment of his advance.

The Gervaise case is particularly spectacular, but one has only to flip through the pages of Fdesouche.com, which reports weekly on Islamist-motivated attacks, to realize how oppressive the cloak of silence is.

On June 20, in Rodez, Aveyron department, a man armed with two knives tried to enter a police station and attack officers.  Unsuccessful, he changed his target and stabbed the manager of the pizzeria next door in the jugular.

On July 5, an Afghan national beat police officers in Rennes and tried to cut the throat of the man who tried to stop him.

In Trappes, on July 10, a pensioner was attacked and stabbed in the neck and chest: he died the next day.

On July 11, an Eritrean who found refuge in France as a "refugee" tried to stab two women in the center of the southern French city of Montpellier.

So that's a small excerpt of the "stabbing epidemic" that is spreading in France and is becoming more and more worrying, even if the state and left-wing opinion controllers pretend not to see it.  As in other areas, they have come up with a language rule: the attacker is simply labeled as a "madman", although, as in the Gervaise case, he invokes Allah, a Koran was found in his backpack and videos on his computer were found that pay homage to jihad.  The anti-terror prosecutor's office did not initiate any investigations into Mohamed L. either.

So many Muslims now live in France that politicians have long had to compete for their votes and are simply afraid of them.  In most cases, the fear may be unfounded.  But it is there and determines their decisions.  The Corona years have shown what fear can do.  These are not the prerequisites that should be the basis for the community of a free constitutional state.  In addition: This state was brought about by someone.  In 1950 around 120,000 Muslims (0.3 percent) lived in France; today their number is estimated at nine million (15 percent).  Their number has more than doubled in the past 25 years.

The denial of Islamism

The Editor-in-Chief of Causeur writes:

“We are well aware of the reason for this silence: Muslims should not be stigmatized.  But isn't refusing to talk about jihadism as if they're all a part of it the best way to stigmatize them?  Are they children from whom we must hide the truth in order not to offend them?  Should we exclude them from contemplating a phenomenon that comes from Islam without being confused with it?  If the attack takes place on the eve of elections, it is also said that one should not 'stoke fears'.  Heaven save us from the voters making an informed choice.”

The denial of the reality of everyday Islamism, which Gilles Kepel calls "atmospheric jihadism," is one of the greatest ills of French society.  [It's holocaust culture that creates this problem in the first place.] A serious symptom of the real problem.

An awful lot of these "stabbings" are attempted beheadings. The EU leaders have clearly decided to genocide the white populations and are using Muslims to do it, as they protect the jihadists and persecute the whites and Christians who dare to complain. As all this goes down with little resistance on the part of whites, it brings to mind C.S. Lewis' book "The Abolition of Man". Europe, and America badly needs strong Catholic leadership.

Why is an "Eritean" mentioned? Do we know he was Muslim?

"Allah" is used by millions of Arabic speaking Christians. It means 'God.'

I don't know why petition to Micron when we know that Micron a slave of Khazars is, like Biden, like Trudeau, etc,... Those same Khazars who have inventend islam and mahomat are now using the same stupid mahometan morons to destroy the Christianity and kill as much as possible Christians, especialy the white ones.
It's all about Anti-White Hatred aka "Destroy the Goy".

Anon 9:19 Many of them are Mohammedans.