Tying it all together. How the Gay Disco explains Ukraine, the Covid scam, and subversion.

https://speakfreeradio.com/2022/06/04/17/operation-scorpio-113/
Dr. Jones discusses the gay disco on Operation Scorpio and how homosexuality, drugs, and public education are being used as social engineering on a global scale.
I see a fair number of Libertarian "memes" on FB, most of them touting the Libertarian claim that they they only want to leave people alone. Nothing could be further from the truth. Libertarians and Classical Liberals have a hierarchy of values, which they expect to be defended by the State. I know and admire many of them for their lucid thinking and their commitment to personal Liberty, and I have voted LP on a number of occasions, but a typical exchange with Libertarian intellectuals can go something like this. The Libertarian asserts the right to read, publish, sell any books he likes. When you point out that certain books have destructive effects on disordered personalities and should be restricted, he digs in his heels, and when you say, "OK, let's just decriminalize kiddy porn: You can print and sell what you like anywhere you like, and I can burn your shop down,, if that is my decision, and neither side can call the cops," he immediately becomes a statist. I am not suggesting they are worse in this respect than other ideologues, only that, like all ideologues, most of them are self-deceived. By the way, I had the above conversation with more than one celebrated Libertarian intellectual (not the saintly Murray Rothbard, who was much too smart to fall into the trap). I prefer Dr. Johnson's view of censorship, that everyman has the right to say what he likes, and every other man has the right to knock him down for it. There is the famous apocryphal statement supposed to be made by Voltaire to the effect that I may disagree with what you say, but I shall defend to the death your right to say it. Really? Suppose I am a Jew and you are Julius Streicher. Will I really defend to the death your right to demonize me and my people and call for our annihilation? Suppose I am an American Christian after the Revolution and the evil tax-collector Tom Paine gets in trouble for publishing his anti-Christian lies in Common Sense. Are we absolutist in defending Streicher and Paine? Simply because I don't like HItler does not mean I have to make an alliance with Stalin. Most of what is written on either side of most issues is pointlessly stupid, and what a waste of time it is to run around defending either Jordan Peterson or his enemies.  Thomas Fleming 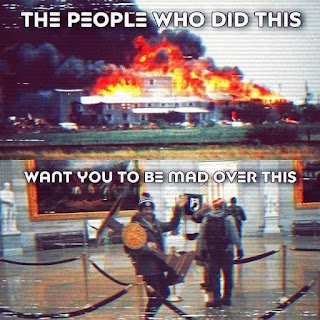 No one can bring it all together and tie it up with a bow quite the way EMJ does.