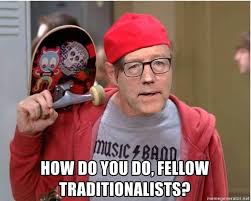 Edit: Barron has an obsession with muscular men, “they follow him everywhere”. Will they be following him to the corn belt? Recently,  one of Barron’s muscleheads got fired from Turd one Fire for sexually harassing people (I think they were women!). So, Barron is now being sent to a remote diocese in “nowhere land.” It sounds like a bit of  a nothing burger moment of the increasingly discredited #metoo movement, and once again, I feel called upon to defend someone I really despise. Robber Barron has bigger problems than fostering “misogyny,”frankly. Maybe  in addition to  heresy and muscle men, there’s a roid rage problem?

Remember how close he was to Cardinal Bernardin and Father Andrew Greeley?  Considering how close he was to them, what did he know about Chicago’s Lavender Mafia?  Where would we be without Novus Ordo Watch to archive things like this, like the obviously aberrosexual Bernardin showing up to a murder scene while the blood was still fresh? To this day, Frank Pellegrini is unavenged.

Barron will be replacing a byproduct of a pink palace seminary.

This is also where the SSPX once had its main seminary in North America, Saint Thomas Aquinas (once a Dominican Friary) is now a Novitiate and  retreat center. The SSPX seminary had to be moved because it was overflowing with seminarians. I don’t think Barron is going to have  this many vocations, despite having access to Saint Mary’s College and Winona State.

Barron’s Chicago connections may  play out here, as Winona is a beautiful locale where wealthy Chicagoans of its poshest families have long had summer homes in the towering hills overlooking the winding Mississippi River. (Maybe this is the gold pocket what Robber Barron is sizing  up?)

The Diocese also has access to world renowned Mayo Clinic in Rochester, and is also an hour and a half drive from one of the largest gay Metroplexes in the Globohomo, the Twin Cities.

There is substantial infrastructure in the Metro area to support a content creator like Turd on Fire and Barron will be able to pay significantly smaller salaries to his staff.  Will he be bringing his flaming turd with him?

It’s unknown how Barron will be able to manage a diocese with 130k Catholics and 109 parishes successfully AND run his media company, but we’ll see. That showboat Archbishop Fulton J. Sheen wasn’t successful at running a diocese either.

Sheen took a stab at running Rochester, NY, not Minnesota. There were too many guineas there for him
to manage the place. Entire sections only spoke the Sicilian dialect. And Kodak was too closely aligned with the film industry to tolerate Sheen. Rochester was never where he wanted to be but it was where Spellman banished him.

The rest of your post is disturbing. I’ve heard
too much body building is as gay as too little. Lots of tattoos in those photos too. Maybe he can hook up with Thug Gorgon for some straight credentials. Both he and Gary Voris have criticized him in the past but I don’t think either holds their theological positions with complete sincerity. Besides, it looks like he likes skateboarding 🛹

Sheen wasn’t traditional enough for Aye-tyes from Palermo. He was as Catholic as Robber Barron, though.

The Eyetalians didn’t like being told they had to go to Mass every week like the potato-heads and when they did go they didn’t care for being told they weren’t tithing because they were putting marble floors in their living rooms.
If Sheen was as good a businessman as he was an orator, he
would’ve sucked up to the Guinea widows dressed in black and done a few high profile mob funerals. Matthew Clark played that game and lasted a long time

Actually, Aye-tyes tend to be pious even when they don't go to church. They don't really mind people asking them if they'd go in future. Most seem to know what's right, in contrast to Irish-American Catholics who tend to get offended if you bring up their church attendance.

Sheen failed in Rochester because he tried to close a school, gave away a parish without telling anyone, introduced sex education, wanted his seminarians to study with Protestants and was unable to communicate with his priests.

Monsignor Schuler strongly disliked +Sheen. I don’t think he was impressed by the Bishop’s backstage persona and referred to him as a “showboat”.

Schuler had no problem with family members or parishioners marrying Lutherans and ultimately leaving the True Church.

He had to deal with a lot of horror stories and drama there.

What was he supposed to do? Curse them from the pulpit?
I’ve long wondered why feeneyites were usually Irish. No longer. Bad food, music, manners, and theology go hand in hand.

Manfred, are you referring to me? I doubt Ivan is a Feeneyite, and I suppose it takes all kinds. Why are you so rude?

I’m not even Irish, might be Celtic, but from Breton, and I love Irish food and company.

If that’s your experience, I guess it is because Feeneyites began in Boston, but many of them were converts, some Jews, a good number of Wasps like Cardinal Avery Dulles, Charles Coulombe and Brother Andre are French, or there are also Arabs like Brother Francis. So I have literally no idea what you’re on about. Lol!

It’s a simple Faith for simple Catholics , albeit well meaning(sometimes )
Ask my Irish grandmother:
What happens if you’re unbaptised?
What if you were abused and left the church ?
What if you never met a good catholic?
Grew up in the bush?
Raised by wolves?
You’re a Jew like Jesus but not for Jesus?

The answer was always the same: “you go to Hell!”

My French and German relatives taught me the concept of nuance.

Is there a particular reason why there are so many anti-Italian diatribes in these comments?

‘Cause the pope is always Italian.

Does Mark Shea still comment here?
I would expect him to weigh in on the
Bishop of the Internet

Listen to your Irish grandma

What if you're Steve Skojec???

I’m always suspicious of so-called traditionalist who, like Schuler and Georg Ratzinger, are overly concerned with sacred music and taking care of their plants 🪴. Sheen liked a good steak, drove a nice car , and didn’t care for any of that.

You stamp your feet, wave your arms and yell "You're gonna be sorry I left".
"You were MEAN to me"!!

Stepan, Schuler and Ratzingers are in the same camp with Sheen. They’re all Ignatius Press worthy authors along with other aesthetes. Not sure where you get the idea that Sheen was butch and tooled around town in his Lincoln eating steaks and quaffing Martinis at the char house. I could co-sign that if he’s going to see Liberace.

Charles Coulombe has a pretty good, and fair, assessment of Sheen:
https://www.youtube.com/watch?v=LP3vDghVu70

Liberace was over-the-top ridiculous and freely admitted it.
And he was rich as a King.

He didn’t get in trouble for dating 15< underage guys, either.

So are many of our greatest Saints - what's your point?

HE WAS NOT GAY!

Are you getting that from Benedict Gröschel's claim that most saints are gay?