Bergoglio: “We Must to Return to Pedro Arrupe. Arrupe is a Saint”

In his interview with the ten chief editors of the European Jesuit magazines, excerpts of which were published today in the Italian daily newspaper La Stampa, Pope Francis not only commented on the Ukraine war, NATO and the Third World War, but also on internal church issues.  He criticized the "restorative" powers, because the fruits of the Second Vatican Council can only be recognized by a "new look" at things.

In the course of the Second Vatican Council, a bright future was predicted for the Church and prosperous Church landscapes were promised.  A "new spring" for the Church has since been diligently claimed, but with a problem that has persisted since 1965: the bright future, the blooming landscapes and the new spring are nowhere to be seen.

In his interview, Pope Francis offers an "innovative" solution to this obvious deficit in the Council's interpretation.  If one does not recognize the great achievements of the most recent Council, then it is not because they do not exist, but because the observer is looking the wrong way.  You have to change your point of view, and that's it...

"The Restoration has gagged the Council"

When asked by the editors if he saw a "spiritual renewal in the Church," Francis said:

“It is very difficult to see spiritual renewal with very outdated schemes.  We need to renew the way we see and evaluate reality.  In the European Church, I see renewal more in the spontaneous things that arise: movements, groups, new bishops who remember that a council is behind them.  For the Council that some pastors remember best is the Council of Trent.  And there is no nonsense in what I say.”

The second part of his "solution" is significantly less innovative and above all not original.  It represents a mantra of the advocates of the Council. According to Francis, the collapse that the Church is experiencing in parts of Western Europe is therefore not to be blamed on the Council and its apologists, but on pre-Conciliar forces which, for example, did not exist in the 19th century, in the spirit of the First Vatican Council,  but, far worse, still living in the spirit of the Council of Trent, that is, in the 16th century.

"The Restoration has gone so far as to gag the Council."

The number of "restorative groups" is "really impressive".  There are a lot of them, especially in the US.

"An Argentine bishop told me he was asked to administer a diocese that had fallen into the hands of these 'restorers.'  They had never accepted the council.”

According to Francis, there are ideas and behaviors that grow out of a restorative attitude that the Council ultimately did not accept:

"That is precisely the problem: that in some contexts the Council has not yet been accepted."

Francis explains why it is taking so long before the fruits of the Second Vatican Council are generally recognizable:

“It is also true that it takes a century for a Council to take root.  We still have 40 years to get it started, so!”

One thing is already certain: none of the noisy interpreters of the Council, who are responsible for setting the wrong course, will then be alive, not to mention the Council Fathers anyway.  The last Council Father from the German-speaking area died in 2014, the last Anglophone Council Father last February.  The last Italian Council Father, Monsignor Luigi Bettazzi, Bishop Emeritus of Ivrea since 1999 and the only living signatory of the 1965 Catacombs Pact, is still alive.  It was Bettazzi who called Pope Francis the “son of the Second Vatican Council” in the summer of 2020.  Even more:

"With the election of Bergoglio, I saw the programmatic culmination of the Council in which I took part." 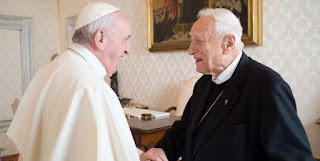 From a spiritual point of view, of course, it is not man's judgment that matters, but God's.  Nevertheless, there seems to be a misunderstanding: when the Church teaches to trust in divine providence, it probably does not mean a consciously comforting projection into a future that eludes any reasonable examination, to justify concrete decisions and judgments.

Francis excuses the error, which is why the Church did not end up in spring but in winter, in two ways in the interview.  For him, the restorative forces that stopped in the 16th century, which prevented implementation of the Second Vatican Council, and the fact that it takes at least a hundred years before the fruits of a council really become visible are responsible for this.  We want to do a quick calculation: According to this, the fruits of the Council of Trent called upon by the Pope would have been recognizable in 1663 at the earliest and those of the First Vatican Council in 1970 at the earliest.  Then why was John XXIII.  convened a new Council as early as 1961?  Didn't he thereby choke off a council before it could become fruitful?

But we want to be careful with the calculations, because, according to Francis, there are definitely “signs of renewal”.  But then the Pope does not think too much about it.  There are groups that provide "social assistance" because they would give the Church "a new face".  "The French are very creative at it."

"Today the same thing is happening through the traditionalists"

Then Francis quickly switches back to the previous explanations in order to pillory the forces allegedly choking off Vatican II in a new variant.  In doing so, he breaks a lance for an influential figure of the post-conciliar period, the then Jesuit General Fr. Pedro Arrupe. 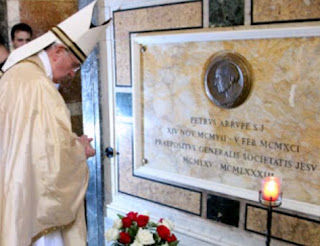 Pope Francis on May 12 at the tomb of General Arrupe

Arrupe, a Basque like the founder of the order Ignatius of Loyola, tried to forge an alliance between Christianity and socialism in the slipstream of the Second Vatican Council and was one of the early supporters of Jorge Mario Bergoglio.  It was Arrupe who appointed Bergoglio Provincial of the Order in Argentina in 1973.

Arrupe's aspirations led to an unprecedented decline of the Jesuit order until, soon after his election, John Paul II pulled the handbrake and ousted him.  For which the Polish Pope was never forgiven by many Jesuits.  There have been efforts under Francis for some years to raise Arrupe to the altars for his demolition.  In May, Francis prayed at the tomb of Arrupe  in the Order's Roman mother church.  He did it for the first time in the summer of 2013.  By addressing Arrupe as a “saint” in the interview published today, Francis anticipated the Jesuit general's evident impending canonization.

To the editors of the European Jesuit magazines he said:

“You were not born yet, but in 1974 I witnessed the Passion of Fr. Pedro Arrupe, Superior General, in the XXXIInd  General Congregation.  At that time there was a conservative reaction to block Arrupe's prophetic voice!  Today this general is a saint for us, but he has endured many attacks.  He was brave because he dared to take the step.  Arrupe was a man of great obedience to the pope.  A great obedience, and Paul VI.  understood that. The best treatise that a pope ever addressed to the Society of Jesus is that which Paul VI.  wrote on December 3, 1974.  He wrote them by hand.  The originals are present.  The Prophet Paul VI  had the freedom to write them.  On the other hand, people connected in some way to the Curia supported a group of Spanish Jesuits who considered themselves the real 'Orthodox' and opposed Arrupe.  Paul VI  never participated in this game.  Arrupe had the ability to discern the will of God combined with childlike simplicity in following the Pope.”

A Spanish Jesuit who "made trouble" everywhere told him at the time in Argentina that he, Bergoglio, didn't understand anything: Arrupe was to blame and he was looking forward to seeing him hanging from the gallows in St. Peter's Square.  Francis doesn't say what silly nonsense that was, since there has never been a gallows in St. Peter's Square.  Rather, Francis uses the unusual anecdote to show how cruel the "restorative" forces were in the post-conciliar period and to bridge the gap to the present day:

“The same thing is happening again, mainly by the traditionalists.  That is why it is important to rescue these figures [like Arrupe] who defended the Council and allegiance to the Pope.  We must return to Arrupe: he is a light of that moment that enlightens us all.”

Pope JPII nearly suppressed the Jesuits. Too bad that he didn't. Arrupe is NO saint! Well, maybe for the false church. That man helped the demise of the once glorious Order; now I would go nowhere near any Jesuit institution. But pro-abortion 'catholics' do.

May I suggest taking a sledge to that tomb and dragging the withered, blackened corpse to the nearest garbage dump?

The gaslighting is reaching ludicrous proportions, there is no longer Truth or lie...in the Vatican2Nuchurch...just ask Bergoglio. Whether from Biden or Jorge, half the country swears what is lie is Truth and vice versa. Not just pols and media spinners, regular people who used to be sane and reasonable have discovered that they can simply "create their own reality".